(On a recent U.S. tour, I asked Gentleman Auction House's Steve Kozel to keep a daily diary of the band's goings-on. All this week, we'll be posting what happened, leading up to the band's CD release show for Alphabet Graveyard on Saturday night at the Bluebird. -- Annie Zaleski)

Since we were playing St. Louis again, we had what I would call a “home day,” where everyone kind of got their stuff packed up to go out for the next couple week, except Mike, who valiantly took on the job of finding us two new tires for the trailer. He wins MVP of the day.

Kiley and I went out to buy some food for the road, and when we got back to my apartment, we were surprised to find a house sparrow flying around the top level of the stairwell. Now, all of the windows in the stairwell were closed, so I’m not really sure how this guy got in, but we ended up (inadvertently) letting him into my apartment and corralling him around a bit until I could get him to fly out of the balcony double-doors.

[NOTE: The house sparrow is a member of the Old World sparrow family, and a relative of the Weaver Finch family. It was brought over from Europe in the late 1800’s as a means of pest control, whereupon it quickly multiplied and expanded its range across the continent, displacing many indigenous species. It’s kind of like the “white people” of bird species.]

At 5:00 we convened at the Bluebird to load in for the evening’s supersweet awesome rad show that night. It was fun to see our friends in Headlights again. Seems like we average about 2 to 3 months between our run-ins with those guys, but it’s always too long. I also highly recommend their new record for early morning drives. I mean like, sunrise early (everyone who knows me is wondering right now when the last time I saw a sunrise was).

Another new record I would recommend belongs to Mates of State, the night’s headliner. I’ve been into the band since Our Constant Concern, and having only seen it once at the Hi-Pointe a few years back, I would have been happy to just be at the show. But no, we got to share the stage, so that revved up the rad meter quite a bit. Obviously I wasn’t the only person excited about seeing the band; kids were standing outside when we were finishing up load-in around 6:30, and by the time doors opened at 7:30 there was a line of people around the side of the building, waiting to get in.

We opened the show, of course, and for the second night in a row, it got sweaty real quick. We played a short set and cruised out of the way for the main event(s), but I will say that it was fun to be able to play in front of a lot of new faces. I’m kind of sensitive to over-exposure and being everywhere at once, since that sort of thing can quickly take a turn for the obnoxious, so it was nice to have a dozen different St. Louisans last night ask us where we were from. 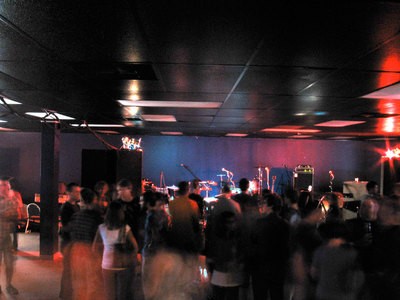 The show was a blast to be at, but, as those of you who were there know, it was HOT. You could sweat sitting still, I kid you not. The place was packed, and all that body heat was too much for the AC to tackle, I guess. Anyway, both bands owned all things rad last night, and Kori & Jason even champed it up for a short and sweaty encore. It was a fun show to watch, and even more fun to be a part of.

Most embarrassing moment of the day: Me trying to tell the Mates tour manager and their cellist/trombonist Louis that they were opening the door to the wrong white van… while simultaneously loading our gear into the trailer which was, of course, hitched to the back of our van. “Wrong van, guys. Wrong va-- Oh. Right,, that is yours. My bad.” I don’t know what I was thinking.

We head to Ft. Wayne, Indiana tomorrow, which has apparently been declared a disaster area due to flooding? Aw crap, I just realized I forgot to bring trunks.