Yesterday marked the first day of fall, and the Gramophone offered up a great show to bring in the new season. There wasn’t a barstool to be found as some of the best names in Midwest hip-hop performed to a standing-room-only crowd. Trackstar the DJ handled the turntables, while Vandalyzm hosted a local lineup that is becoming very familiar at the south city venue.

First up was the "Northside Phenomenon" Rockwell Knuckles, who broke in some new material on the crowd. It’s always a pleasure to watch Rocky perform -- the intensity of his material is periodically broken up by his playful expressions onstage. If you haven’t seen him live yet, you need to check him out.

Next was Family Affair, who played a quick set of their crowd favorites, followed by west St. Louis’ Kenny Knox. Gotta Be Karim and Vandalyzm tore it down as usual with plenty of stage presence and through-the -roof energy. Black Spade was on deck to assist Karim on the track “Revolutionary Bullshit.”

Local emcee John Hill was faced with the task of preceding the headlining act. He put up a good performance, but he wasn’t able to top the crowd response of some of the acts that went on before him. Regardless, his lyrics and production were solid as he promoted his trilogy of mixtapes, 3 Sixteen. 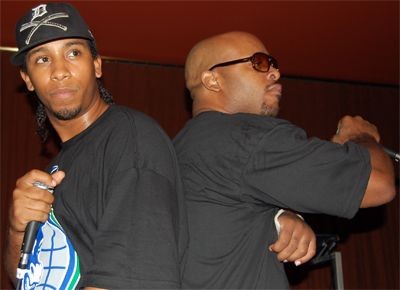 For the finale, Detroit veteran Royce da 5’9” was joined onstage by his younger brother Kid Vishis. The duo ran through an arsenal of Royce’s underground tracks, including a teaser of the “Swagga Like Us” verse that he apparently wrote for P. Diddy. Royce showcased his metaphor-a-minute style by going a capella on a couple of verses, getting cheers from the audience with lines like “I’ll do to your mama / what the KKK wants to do to Obama.”

If you followed every line, you could catch Royce (who’s no stranger to industry beef) taking shots at other rappers (i.e. Joe Buddens). Many of the songs he performed were off his latest mixtape The Bar Exam 2, which is available for free download on hiphopdx.com. He ended with his best-known single “Boom” off his 2002 album Rock City.