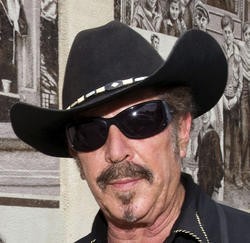 Sharp-tongued Kinky Friedman is back in St. Louis for the first time in years, playing Off Broadway tomorrow night. We talked to Friedman about his music and his failed political ambitions. He also spent some time talking about his stand for animal rights: He hosts Utopia Animal Rescue on his Texas ranch. The details of his involvement and the restorative power of a dog barking, below:

Roy Kasten: Tell me about your involvement with Utopia Animal Rescue. How did your love for animals, especially dogs, turn into doing something about it?

Most of that was the good luck that Cousin Nancy [Parker-Simons, co-founder of the shelter] and I met up, fifteen years ago, after her husband died. She came up to the hill country, and after dumping a bunch of animals on her, she was developing quite a menagerie. The neighbors came with pitchforks and drove her out of town.

Neighbors are bad to have if you want to run an animal rescue shelter. Maybe everybody does like a soup kitchen or a half-way house, but they don't want it in their neighborhood. Fortunately my dad gave us a portion of the ranch here, big place, and it's surrounded by hills. The only people who can hear the dogs barking at night is this guy I met at the supermarket the other day, an old man, lives up on the top of the hill with his burro. He says he hears the dogs barking and feels really good, connected to the world.

Have you seen a change in attitudes about animal rights over the years?

A lot of things have changed. Usually I agree with Joseph Heller, who wrote Catch 22 and who said that every change is for the worse. There have been some good changes. I never thought I'd be against animal circuses or take no interest in going to rodeos. We need to change. If we lose the animals, and we have lost a bunch, it gets very, very lonely. At Utopia we pride ourselves in being defenders of the strays. Of course, the irony there is that we are stays ourselves. We take any stray or abused animal. We are a never-kill sanctuary. Anyone who wants to learn about it can go to Utopiarescue.com. As I always say, money can buy you a fine dog, but only love can make him wag his tail.