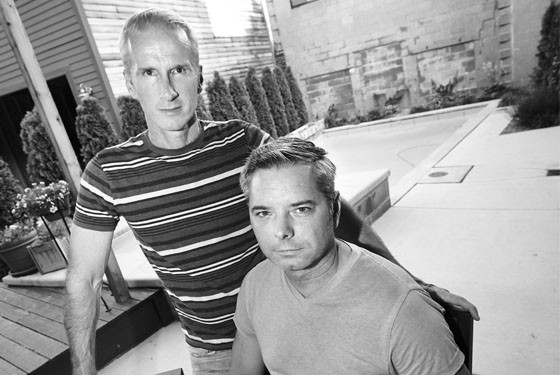 Steve Truesdell
Doug Moore and Brad Fratello's patio and pool backs up to the Ready Room.

On June 24, as hundreds of fans entered the Ready Room — a new 800-person-capacity music venue on Manchester Avenue in the Grove — they were greeted with a warning sign: "Tonight's show features excessive volume levels. Hearing protection available at front door." The experimental-rock group Swans would soon treat the audience to one of its brutally loud and viscerally exhausting performances — a sweaty, two-hour set of heavy guitar drone and chest-thumping bass.

Next door at the Demo — a much smaller sister venue which opened its doors in May, just a month after the Ready Room — rock group the Paul Collins Beat christened the stage along with fellow pop-influenced bangers Sherbert and Bruiser Queen.

Inside the two venues, the crowds roared their approval. Outside, it was a different story.

"Throwing two bands in a blender is what it's like to be in our back yard," says Grove resident Brad Fratello.

Fratello and his husband, St. Louis Post-Dispatch reporter Doug Moore, own the Forest Park Southeast home that abuts the back wall of the Ready Room. Fratello, a professor at St. Louis Community College, says he can hear shows happening on the stage only twenty feet away from where his head hits the pillow at night — even with all the doors and windows closed.

"It's not just a bass thumping. We can hear lyrics of songs. We can hear the entire array of instruments," he says. "We're talking about potentially $1 million worth of residential investments backed up immediately against probably the loudest potential commercial venues that one could put someplace."

In the back yard, the edge of Fratello and Moore's in-ground swimming pool sits a mere five feet from the Ready Room. There's not an alley, garage or even a fence between them. About twelve feet up the wall is the window of the venue's greenroom — frosted by the building's owners so the couple could enjoy some privacy, including their customary skinny dipping, in their own back yard. Fratello can see the silhouette of a piece of paper taped up on the inside of the pane. He doesn't know what it says, but he guesses it probably has something to do with the fact that, for a period of time, bands would prop the window open and ash their cigarettes directly into his yard. That, at least, has stopped.

See also: The Demo Closed Indefinitely Due to Noise Complaints from Grove Residents 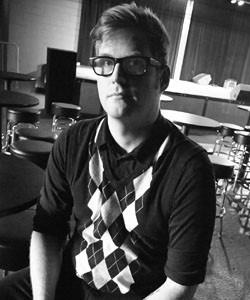 For these reasons and more, Fratello and Moore and many of their neighbors are fed up. They've spearheaded a campaign to put a stop to the noise, and they're hitting the venues where it hurts: their liquor licenses.

"We were told by our alderman, Joe Roddy, essentially, that protesting the liquor licenses of these two clubs was our only avenue to start to reach some sort of compromise," says Fratello. "All the neighbors that have signed it have seen it as the last resort. We were literally told that there was no other way for us to move forward, to have ourselves heard."

It's working. After a backlash from the neighborhood and subsequent removal of a conditional-use catering license, the Demo closed on June 26. Without bar sales to sustain its business model, the venue canceled or parceled out 60-plus shows from its event calendar to other local venues including Fubar, 2720 Cherokee and the Ready Room next door. But the Ready Room is in jeopardy as well, with formal complaints against both venues circulating among the residents. They are asking the city to take a harder look at the clubs.

"I never went into it promising the world because I knew we were going to generate some noise. I knew there were going to be issues and that we'd have to work on this as neighbors," says Mike Cracchiolo, managing partner of both the Ready Room and the Demo. "I am sympathetic to it, but at the same time, as a businessperson, the Grove is the spot for me. This is the spot for the most potential as a walkable entertainment district.

"Venues are constantly bringing people in who have never been here before. A lot of places reacted directly to this moving in," he goes on. "Bars are keeping later hours, their business starts to pick up. It's understandable why the neighbors are upset, but at the same time, some of that growth is inevitable."

The controversy seems to mark a moment of transition for the Grove. It's changing from a moderately busy club district popular with the LGBT crowd that's bordered by an increasingly affluent residential neighborhood, into a full-fledged entertainment district — and everything that goes along with that.

"That's sort of a good problem to have," says Chip Schloss, owner of long-standing area restaurant and venue Atomic Cowboy. "It's growing pains for the neighborhood."