Anti-Flag Gets Belgian Crowd to Chant "Hands Up; Don't Shoot" During Concert 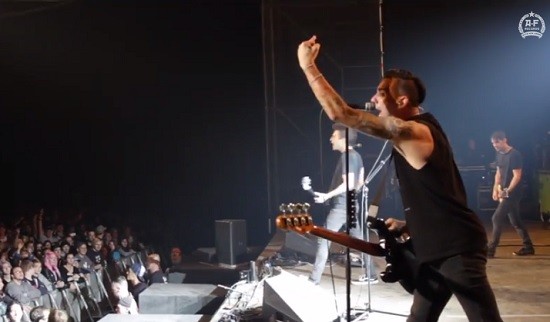 Screenshot from the video.
Anti-Flag in Belgium.

Politically charged Pittsburgh punk band Anti-Flag performed in Belgium at Pukkelpop 2014 this past weekend, taking the opportunity to address the unrest in Ferguson surrounding the shooting of eighteen-year-old Mike Brown by a police officer on August 9. Clad in T-shirts that read "Hands up; don't shoot," the most popular rallying cry to come out of the protests surrounding the case, the band stressed the need for justice in the case and decried violence at the hands of the police, adding that "we the people" must be the watchdogs.

"Friends, Michael Brown is dead," said guitarist and frontman Justin Sane. "But we demand justice in his name tonight. And tonight, we say to the police of Ferguson: Shame on you. And the whole world is watching."

"Now together, say with us," he continued. "Hands up; don't shoot!"

The crowd in Belgium complied, with hundreds in attendance chanting the slogan along with the band before it launched into its song "Fuck Police Brutality," from 1996's Die for the Government.

Since then the band has released a new version of its song "Police Story," updated and renamed after the slogan. All proceeds from its sale will go to the Brown family "to aid his family in their fight for justice in his name."

Watch the video, hear the new song and read a full transcript of remarks below:

Brothers and sisters, everyone doing OK out there? You may have noticed that tonight we are wearing these shirts. "Hands up; don't shoot."

We're wearing these shirts tonight because one week ago, in Ferguson, Missouri, police shot and killed an unarmed African American youth by the name of Michael Brown. Because, as citizens of not just one country, but of this planet, it's up to us to fight for justice and be the watchdog of the police whenever they step over the line of what they're sworn to do: uphold the law.

Friends, Michael Brown is dead, but we demand justice in his name tonight. And tonight, we say to the police of Ferguson: Shame on you. And the whole world is watching.

Now together, say with us: Hands up; don't shoot! [Chanting]