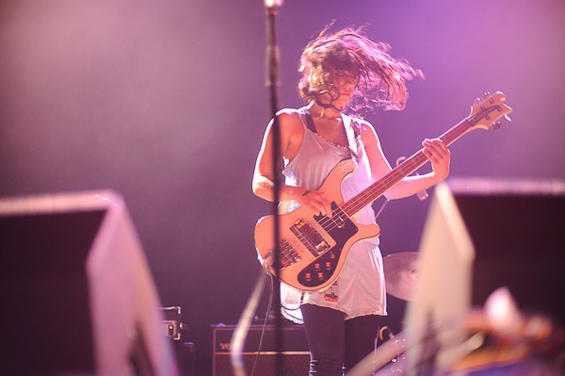 Reaction to the Pageant double-bill featuring the Temper Trap and WarPaint generally fell into two categories: "I love those bands!" or "Who?" Still, a respectable crowd filled the venue's main floor for the brief, just-over-two-hour concert.

L.A.'s WarPaint is certainly the buzzier of the two bands in some circles; in fact, more than a few people left after the all-female quartet played. The gothic thrumming of its music - plaque-scraping guitar, bedrock bass, caveman drumming - owes debts to early '80s Cure (specifically, the Pornography/Faith era) and New Order (Movement), Siouxsie and the Banshees and even Pylon. But its lyrics can skew to the lightweight and playful, creating an interesting contrast that's something along the lines of a valley girl gone to hell.

View an entire slideshow of the Temper Trap/WarPaint show here

Guitarist Emily Kokal was the strongest singer in WarPaint; her clear, powerful voice towered over the midnight morass. But guitarist/vocalist Theresa Wayman and bassist/vocalist Jenny Lee Lindberg brought smoky nuance and charcoal sensuality to their lead parts and harmonies. This added welcome greyscale tones to the atmosphere and prevented the 40-minute set from turning into a droning mess.

Still, WarPaint was at its best during its stormier moments, such as "Elephants." As Stella Mozgawa gonged her drums like a grandfather clock, Lindberg marched in place like a rag-tag member of the Partridge Family; Wayman and Kokal flanked the latter, howling and adding to the dense, macabre music. The power of these songs highlighted WarPaint's weaker, delicate moments; the stripped-down dirge "Billie Holliday" was as wobbly as a three-legged chair, full of nasally vocals and a dragging tempo.

If WarPaint were the casual hipster openers, then headliners Temper Trap were all sleek glamour and polished confidence. The Australian quartet oozed self-assurance, thanks to its tasteful, grown-up light show and a well-honed stage performance. The band played every song on its lone full-length, Conditions, along with a more acoustic, Radiohead-ish new song. It's a somewhat brave move, because the success (or failure) of the set depended on how strongly it believes in its debut. Weaker Conditions songs that might normally not be played live still made appearances, meaning that the hour-long set dragged here and there. 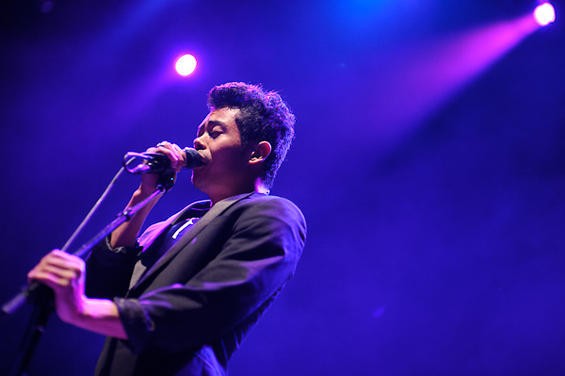 For the most part, however, the show succeeded.The Temper Trap's frequently compared to U2, thanks to its penchant for grandiose soundscapes. And last night, nearly every song sounded like a grand finale or a big finish full of thundering-hooves drums, crashing guitars and dramatic vocal gestures. But the band's influences are harder to pin down: "Fader" was a bizarre-world cousin of Christopher Cross' soft-rock classic "Ride Like the Wind"; the keyboards and vocal cadences of "Love Lost" also had the soft glow of AM gold. But "Down River" was a jolly percussion clinic which resembled Vampire Weekend, and the throbbing dance beats, layered harmonies and keyboards made "Resurrection" into a hybrid of TV on the Radio and Scissor Sisters.