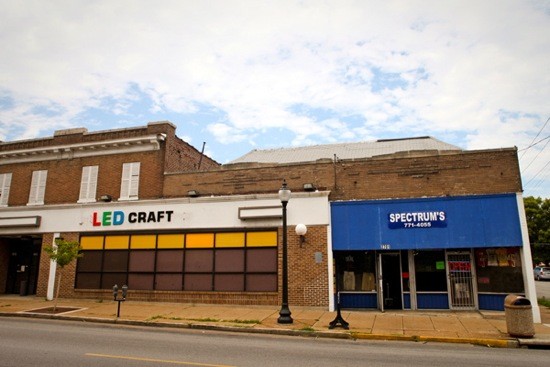 The Luminary Center for the Arts -- the eclectic incubator for creativity of many stripes currently located near Kingshighway and Arsenal -- is finally moving to Cherokee Street. The new address will be 2701-7 Cherokee, directly across the street from the old Pig Slop studios (and current mushmaus space). Our news blog has the full story. There are fairly dramatic renovations needed, but proprietors James and Brea McAnally hope to open their new doors in spring 2013.

See also: The Luminary Is Finally Coming to Cherokee Street (Though Not Where Originally Planned)

The Luminary has posted an update to its Capital Campaign online -- plenty of specifics about its plans can be found there. Here's the Overview:

The Luminary launched in 2007 in a former convent as an artist-run resourcing organization. In the past 5 years, we have quickly grown, initiating acclaimed exhibitions, an ambitious concert series, an international artist-in-residence program and independent projects such as Temporary Art Review, AV Equipment Library, and FORM Contemporary Design Show. In December 2011, we announced plans to move to Cherokee Street as the next step in our commitment to develop a sustainable platform for supporting artists in our region. In searching for the best location for that vision, we sought out a number of possible options before moving forward with 2701-7 Cherokee Street, a historic corner complex at Cherokee and Ohio. The building will require a complete renovation beginning in October 2012 and continuing through Spring 2013. This building allows us to develop sustainably with a lower initial cost, keeping our overhead manageable and allowing us to invest more directly in the programs and events that have gotten us here. Visit our Capital Campaign FAQ page for more details about the move.