Daniel Pujol on the United States of Being 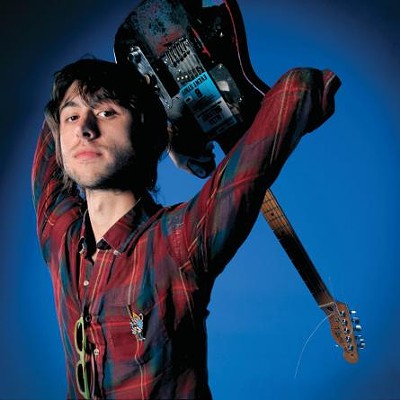 Courtesy of Tell All Your Friends PR

Daniel Pujol is a man of many talents. Whether he's completing his degree, playing ragers at SXSW, putting out records or writing poetry in an online series with his girlfriend, Pujol remains a vital voice for the hustling world of evolutionary rock & roll. Checked by tastemaker Jack White and his Third Man Records imprint, Pujol continues to propel forward with his latest release, United States of Being on Saddle Creek. After years of playing with a rotating cast of talented musicians, he has landed on a line-up consisting of bassist Daniel Severs and former St. Louisan Stewart Copeland. Both on record and in life, Pujol offers a unique view into the life of contemporary America, always on point and never at a loss for words. We caught up with Pujol about finishing his degree in global affairs, his new record, and the trials and tribulations of life as a twentysomething.

Pujol will be performing Saturday night at El Lenador with King Arthur, Doom Town, Bricklayer, and Black For A Second.

Josh Levi: You've said in other interviews that you write at a pretty quick pace, anywhere from a few days to a few weeks. Was it the same with this record?

Daniel Pujol: Yeah, kinda. In May, I've been working on three... There's three records that I know that I'm doing right now and one more that I've kind of started working on, but what happened was a couple of songs that were going to be on that one moved over to the one that I'm about to put out now, which is better for the narrative. A much more cohesive narrative. I write pretty fast, and most of the time stuff will come pretty quick.

What I do is if I have to write a song about a cat, and a song about a dog, and a child to be able to write a song about a man - then I'll do that. And I won't just be frustrated and not write. Sometimes that works and sometimes it doesn't. Sometimes the song about the cat actually turns into the song about a man and then I have three other song structures that I can tweak on. I usually do a cycle. X File On Main St, that's an example of all of the songs that I had to write to be able to write Nasty, Brutish, and Short and United States of Being. The one that I'm getting together now, which is more of a home recordings kind of record, it's all of the songs that are going to be in between all of the bigger works that I do.

So they all kind of bleed into each other in a way?

Yeah. I'm not necessarily conscious of it until after the fact. I have intent going into it, but I don't limit myself to what I want right now because who you are right now is already done and what you need, you might not have known what you wanted. I don't really go into this being like, "I'm this version of Daniel and I'm going to make this kind of record because I definitely know who I am and what gets me off." It's just an ongoing narrative.

Are you still pursuing your degree in global affairs?

How did that turn out?

It turned out good. I graduated with an A, 3.84. I have just been working like a crazy animal between all this shit for about two and a half years. Basically having to do one thing to feed the other thing and now it's good to have the same people and they're my friends and we can do it together and there's stability to it.

Did your studies play into the writing of United States of Being?

Definitely. A lot of market relations and vocabulary kind of taking place of social relations and interpersonal vocabulary. Kind of maybe an artistic existential take on neo-liberalism and also thinking about...you have the Internet, you have a media access to everything that you want.

But you know, I wanted to write some songs about relationships and interpersonal situations that didn't really present the end of it. It wasn't like, you know, this narrative and this character is in this situation and now he or she has arrived here, and they're justified because they ended up there. It's just in the middle of it. It's taking the idea of consumer choice and saying, "I'm not going to be a typical punk and say consumerism is bad." Regardless if it's good or bad or not, it's fucking real so let's split that into maybe a model of social interaction that we're not aware of. Because it's so prevalent in our culture, that maybe we interact with each other the same way we interact with all that stuff. And maybe that this language that hasn't been articulated yet -- this market language may be perverting or overly defining what we view is possible through language and how we interact with one another. Yeah, school fed right into it.

We're the last generation to have been born before the Internet had existed. How do you feel about social media and the internet being positive or negative?

I think it has to be positive because it's real. And I think that if you write it off as negative, you're kind of being like, "Oh I just want to go run away in the desert and live in my monastery," but we've got fucking GPS and predator drones and high fructose corn syrup. It's like there's no place to go anymore. It's good that you said we're the last generation to be born before the Internet. It's like the generation before us, people that are like ten or fifteen years older than us, a lot of guys are into analog recording and they're like, "Life used to be more material!" and they show the virtue of that. We remember being in second grade and having to cram a floppy disk into some weird computer to play Oregon Trail and then we graduated from college, and it's like "Oh, I can't work at McDonalds without my iPhone."

I don't think it's bad. I think it's something that everyone's going to have to deal with. I do think that it kind of blows open identity in a way. The possibilities are endless and it's very easy to make yourself to appear as a certain type of person, perhaps in a way where you believe you are that type of person or vice versa. It's very easy to assemble who your idealized self [is] and possibly act it out in the real world.