People Bitching About LouFest: Presented to You by the Internet

This week's LouFest lineup announcement has stirred up a lot of conversation in the city of St. Louis. The festival's new partnership with C3 Presents has served as a lightning rod of sorts: There are those who are excited about the veteran production company's ability to draw some big names, and then there are those who are afraid of LouFest becoming a cookie-cutter festival, indistinguishable from the many other summer events that occur each year.

Another common complaint is that the lineup is too narrow in scope, and that St. Louis' history of diverse musical influences is not represented. Many of these complaints can be filed under the "Haters Gonna Hate" category, but some raise valid points.

Especially when those points are accompanied by a picture of an adorable baby elephant.

Yesterday the Internet graced us all with "People Bitching About Loufest," the Tumblr site which takes social media's complaints regarding this year's lineup and pairs them with adorable pictures of animals. You know, because the internet.

Its proprietors, who at this point remain anonymous, explain their actions in this way:

This is a blog curated a LouFest fan and lifelong St. Louisan who, this year, has been inordinately amused by the complaints about LouFest put forth by their fellow citizens (it's of note that the vast, vast majority of commentary has been positive, however). LouFest is excellent for St. Louis, and so many of us are proud and excited that it takes place each year.

Each baby animal photo features a quote pulled from Facebook, Reddit, or Twitter with the name of the author redacted. Most spelling/grammatical errors have been corrected for comprehension.

Here are a few of our favorite animal/complaint pairings: 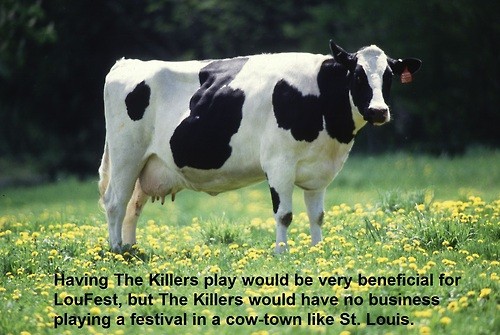 Click through to page two for more, including our personal favorite.