TOM HELLAUER
Maya Harlan attends to the racks at LAUNCH, a two-year-old boutique on the Hill.

It's not just that dollars leave our community for Seattle, or San Francisco. Or that good jobs helping customers have turned into jobs dashing desperately around warehouses or throwing packages onto porches. Even from a strictly selfish point of view, the trend is bad for shoppers. Consider this: In many parts of town, there's no place where you can pick up a cute gift or a book or a sweater on the day you need it. (Should have thought of that 48 hours ago!) No longer can you benefit from the sensation of touching, smelling, weighing the product you're about to purchase. No longer can you trust what you're buying. No longer can you browse.

But all is not lost. Not even close. The RFT's Melissa Meinzer recently dug up a study by the Washington-based National Retail Federation, which collects data on Americans' shopping habits. The organization's Consumer View polled 3,002 consumers over five days in July 2017, and it found that half of millennial and generation Z consumers reported shopping in stores more than they did the year before. And only 21 percent made more than half their purchases online.

It's not easy to survive in this retail landscape, but those numbers suggest it's possible — and, indeed, we found no shortage of St. Louis shopkeepers who are making it work. From the venerable Left Bank Books, which has staved off any number of challenges since its 1969 founding, to LARK Skin Co., which started online but recently opened a storefront in Webster Groves, some savvy retailers are finding ways not just to survive, but to thrive.

In the midst of the doom and gloom of 2018, we're excited to tell their stories — and we hope you'll find them as inspirational as our writers did. Maybe reading about them will compel you to open that business. Better yet, maybe it will remind you to shop local this autumn. There are a ton of great stores out there; you just need to remember to get off your phone and show them a little love so it stays that way.
—Sarah Fenske 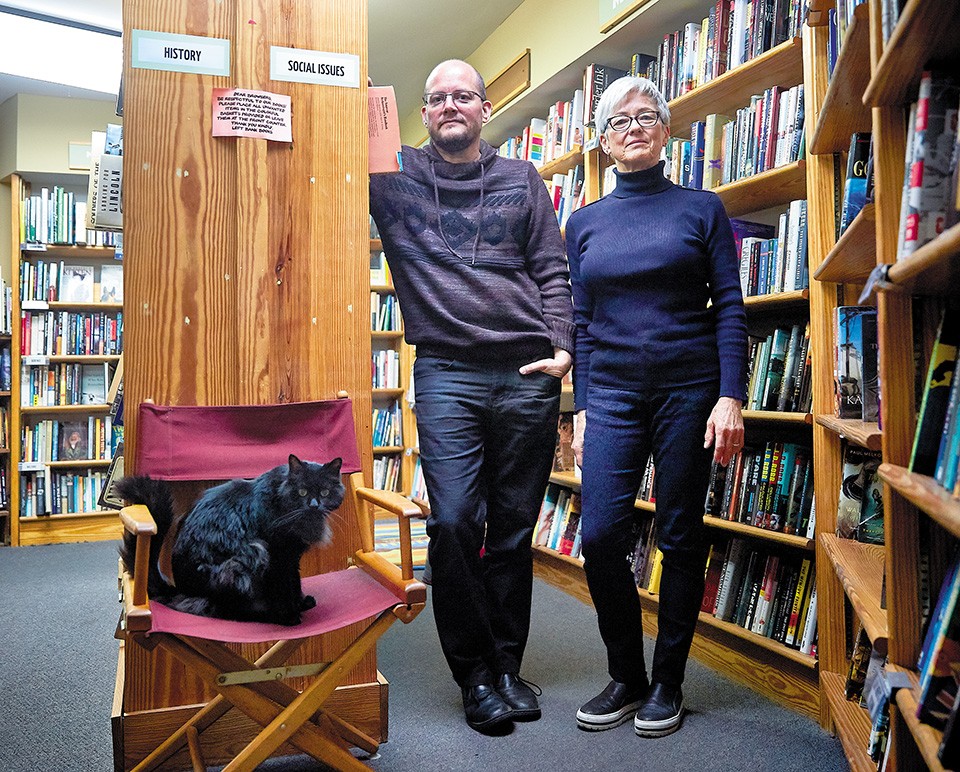 For Kris Kleindienst and Jarek Steele, the married couple who own St. Louis' landmark Left Bank Books (399 North Euclid Avenue, 314-367-6731), the Great Retail Panic of 2018 has engendered more observation than trepidation. After all, the "Amazon effect" now disrupting clothing stores and groceries is something bookstores have been battling for almost two decades.

"When Amazon started, it was looking for something to sell online," Kleindienst recalls. "And we were the right people to go after. Books are cheap, and they don't spoil. They picked our industry and went after it."

Really, it's not like things were easy for independent book shops even before that. Rom-com fans may remember You've Got Mail, the 1998 Nora Ephron movie that explored online romance in the age before Match.com. There, Meg Ryan's plucky bookseller wasn't threatened by e-commerce, but rather big chains offering coffee and T-shirts and three floors of stock. Left Bank — founded in 1969 and anchoring the corner of Euclid and McPherson in the Central West End since 1977 — lived through that disruption too, not to mention the fearsome threat that industry watchers were once convinced was posed by the e-book.

"There was no breather," Kleindienst says.

Yet these days, as the pair's equanimity should indicate, indie bookstores are doing alright... or at least the good ones are. And Left Bank is one of the good ones. Shop owners like Steele and Kleindienst aren't getting rich. ("This is not a profession you do to make a lot of money," Steele hastens to note. "You do it because you love the thing you're doing.") But they are staying alive — and now that they boast several decades of survival in the midst of seriously trying times, they know they present something of a path forward for anxious retailers.

Their strategy, alas, won't work for everyone. They're not selling books the way J. Crew is selling ballet flats and cashmere sweaters or Walmart is selling discounts. Left Bank is selling an experience. It's selling its staff's expertise and curatorial abilities. It's selling community.

And while J. Crew could maybe claim all that, it works especially well in Left Bank's case because its owners do no part of that cynically. Their store is an expression of their values, its selection of items instinctual rather than focus-grouped.

For this bookstore, it's not just about the "Black Lives Matter" sign in the window (although there's long been that) or the fact that Steele is a transman (Kleindienst, too, identifies as queer and had a long history as a lesbian activist before their marriage). Their politics are reflected not only in the obvious nonfiction areas, but also in the children's book selection and the diverse group of authors they book for events.

And while a high-paid bookstore consultant might argue that wearing their politics on their sleeve is bad for business, Steele and Kleindienst have seen enough to know otherwise. They know the people who shop at Left Bank aren't just buying a book — they're making a statement.

"It's a tribalism kind of thing," Steele says. "If you shop here and buy your books here, it says ..."

"Who you are," Kleindienst finishes. 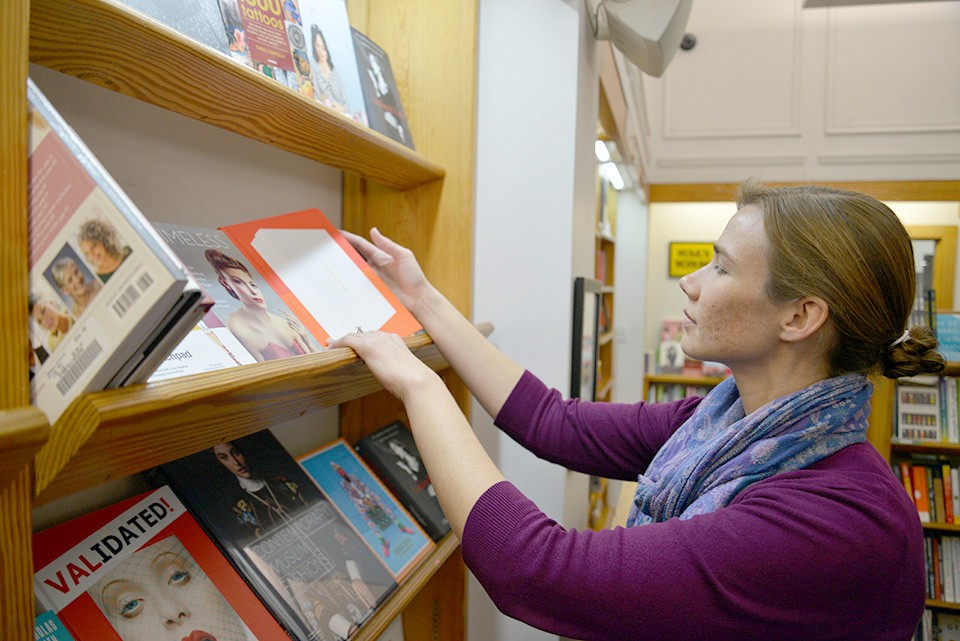 TOM HELLAUER
Being a Left Bank shopper is akin to being a part of a tribe.

Using your Left Bank bookmark at a coffee shop or on the MetroLink is a low-key way to mark that tribal identity; Instagramming it kicks it up a notch. But you can also take things much further — say, by showing up to one of the store's many, many events. At this point, author visits are such a big part of what the shop does, two full-time staffers run them. Many others help out as needed.

Some of the smaller events, with lesser-known authors, don't contribute much to the bottom line. (The larger ones, held off-site to accommodate hundreds of book lovers, are a different story.) But Kleindienst and Steele are convinced they're still worth it. It's not just that readings get the shop's name out there, or that they establish vital ties to authors who might later star in those off-site money-makers — although both, sure, are part of it.

It's more that, at these events, people can connect ... person to person, not just social-media avatar to social-media avatar. Left Bank has seen customers meet, fall in love and then return to the shop for their engagement photo shoot. They've also seen the way a real-life conversation can open eyes and form friendships across lines of race, class and geography.

Kleindienst remembers a reading just after Ferguson, a night with a packed house. She recalls a white man standing up, earnestly asking, "What can I actually do to change things?"

His neighbor, a young black man, turned to him. "You could start by talking to me."

"You could have heard a pin drop," recalls Kleindienst. The two men, she says, later continued their conversation one on one.

Interactions like that one have her and Steele convinced that there's magic in the community Left Bank has created, magic when people leave their homes to partake in the ancient art of storytelling, or buying pages that contain it. It's the kind of magic that leaves some patrons with stories of their own.

"These people were listening — actually listening," she says of the post-Ferguson reading. "You can't do that on Amazon."

Nor can you find an arrangement of books that's been chosen specifically to expand your horizons, or staffers eager to share their thoughts on which new release you ought to try next. Algorithms can be gamed, and Amazon's "recommendations for you" can easily go off-kilter. A conversation with someone who knows the inventory backwards and forwards? That's what you get from a good bookstore like Left Bank, and that's irreplaceable.

Of the shop's staffers, Kleindienst says, "We all have one thing in common. We never stop getting excited about opening a box of books. And we're able to convey that to people."

It's how Kleindienst and Steele beat Borders, and e-books, and how they're holding Amazon at bay. Well, that and the almost hypnotic peace that can overcome you upon walking into a shop filled with things to read, people to interact with and a cat to pet (however gingerly — Left Bank's Spike being notoriously unwilling to suffer fools, or toddlers, gladly).

"It's a happy place, a supportive place in these dark times of late," Kleindienst says. "We're a refuge. And most days, we're able to sell enough books to pay the rent." You've Got Mail didn't foresee that happy ending, but then again, it didn't anticipate Tinder either.
—Sarah Fenske