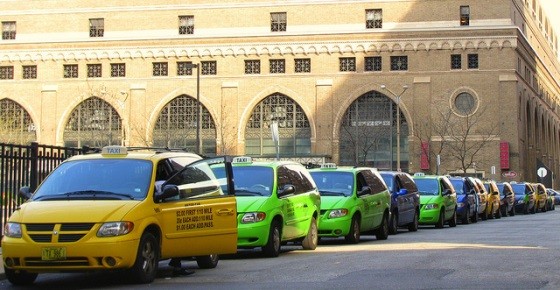 Image via
Will St. Louis taxis be competing with UberX soon?

Today was supposed to be the day St. Louis got UberX.

Now it appears that decision could take a bit longer.

The Metropolitan Taxicab Commission, which regulates vehicles-for-hire in the city and county of St. Louis, is still set to meet at 10 this morning in the campus theater of St. Louis Forest Park Community College. They've devoted practically their whole agenda to discussing code changes that would allow companies like UberX to start operating here.

"I'm not going to vote for anything that Uber won't apply for," says Sommers, who has only one vote on the nine-member commission that includes appointees of mayor Francis Slay and county executive Steve Stenger. By law, four members represent the taxi industry.

Uber sounds displeased. They released a statement last night saying: "Not only have [the MTC] refused to collaborate regarding what a potential proposal to authorize ridesharing may look like, they have also refused to make their proposal public despite their repeated promises to do so."

The MTC published a "preview" on Saturday afternoon outlining the changes they're considering making to the code. They claim they've conceded ground on all of the 15 "legistlative principles" UberX wants enshrined in the new code - except one.

The big debate has come down to background checks for potential drivers. State law mandates the MTC use an applicant's fingerprints. UberX uses a third-party online vendor, and has repeatedly said a fingerprint requirement is a deal-breaker and too burdensome on its business model.

Last night, Slay published a blog post saying he's going to ask the St. Louis Metropolitan Police Department to review Uber's background check system and decide within two weeks whether it's adequate. If it is, Slay wrote, the MTC should "immediately and provisionally" give Uber a license to operate.

He says "there is less flexibility" on the fingerprint issue, because it's mandated by state statute. But he also says he'll work with state lawmakers when they reconvene in Jefferson City this January "to fully accommodate ride sharing services in St. Louis and St. Louis County-- like the rest of the state."

Meanwhile, tech CEO and zealous pro-Uber activist Ed Domain told Riverfront Times last night that he expects some 60 supporters to weigh in publicly with him at today's meeting.

"I'm practicing my speech right now," he said. "I'll have some pointed questions for the MTC."

We have no doubt.