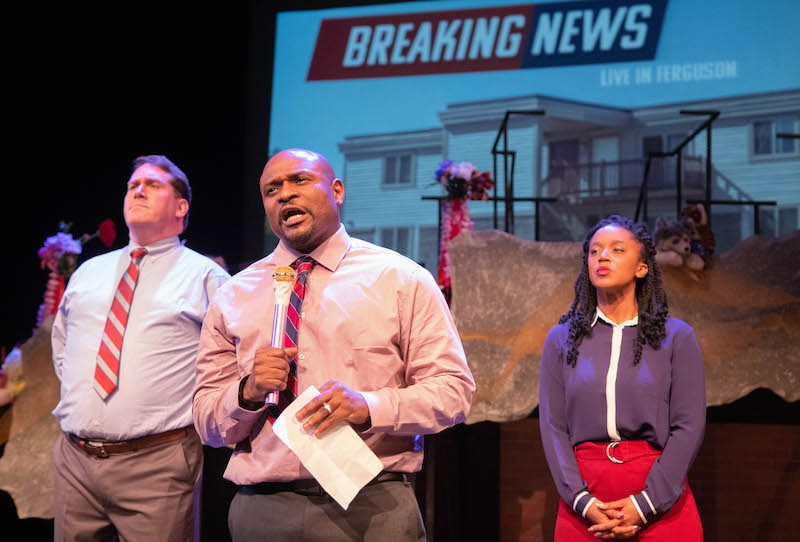 All the news stories have been written and the documentaries released; four years after the killing of Michael Brown, art steps up to make sense of what remains a senseless act. Playwrights Kristen Adele Calhoun and Michael Thomas Walker did the hard work needed to write the new drama Canfield Drive, conducting interviews with a wide swath of people, undergoing a long workshop process with repeated public readings and listening to audience feedback. Not even a quick-moving blizzard could stop the show from going on during its world premiere.

Produced in conjunction with the Black Rep, which commissioned the play, Canfield Drive is an ambitious story bravely told. Most of all it's art, powerful and alive at all times, even in its darkest moments. Telling the truth and living always requires bravery, but Calhoun and Walker show more courage than most, walking right into the bloody mess of America's festering Achilles heel, racism. It's painful and honest and, ultimately, cathartic to watch because it doesn't take the easy way out. There are no simple answers to be found at the end, no happy endings discovered in the fires of Ferguson. What Canfield Drive does is show us the next step. One step forward might not seem like much, but it's one step farther than we were yesterday.

Calhoun and Walker use an abundance of short scenes, and have their four-person cast assay multiple characters, to allow as many voices as possible to be heard, which neatly dispsenses with the myth of black culture being monolithic; there are no agreements, only opinions. The main plot line follows TV journalists Imani Duncan-Ward (playwright Kristen Adele) and Brad O'Connor (Christopher Hickey), who have very different viewpoints about what happened in Ferguson on August 9, 2014. Sent to St. Louis for the duration of the protests, the two argue on-screen and off about who Michael Brown was and why he was killed.

Imani sees his death as another consequence of racist policies, while Brad believes Brown was a thug who failed to comply with police orders and got what he deserved. Off-camera, Brad says he's merely arguing the opposition viewpoint and that he's not a racist, he's "just doing his job." Imani doesn't have the luxury of compartmentalizing her beliefs for a paycheck. Ironically, Brad considers Imani "his black friend at work," and as their story progresses we see what that misconception costs Imani. Brad expects her to explain racism to him in a way he can not only understand but agree with, which is an insane — but very common — white blindspot. If you can't trust a black person to know racism when they see it, who can you trust?

Hickey and Adele are joined in supporting roles by Amy Loui and Eric Conners, and all four actors are outstanding in the many characters they play, and not just the obvious ones. Amy Loui plays both the unapologetic Darren Wilson in his first televised interview and a vaguely familiar Southern cooking show host who teaches us a recipe that explains St. Louis' racial inequities, while Hickey provides a bonkers version of Sarah Palin spouting half-thoughts to a camera … perhaps also verbatim, but who can tell?

Meanwhile, the white mayor of Ferguson defends his city by claiming he never received phone calls or emails from any residents complaining that "the police unfairly pulled them over or beat them." A protestor screams at the police, "Just shoot me! They're gonna shoot me anyway, it may as well be for something I believe in!" The gulf between these two people can't be crossed via a polite email or phone call, because only one of them is fighting for his life.

Margery and Peter Spack's set design incorporates two large video screens, which are used to provide the backdrops for several scenes and identify the various speakers. The screens show the familiar archival footage of Michael Brown in the QuikTrip before his run-in with Darren Wilson, along with photos and video of the protests that followed and the ad hoc memorial constructed in the middle of Canfield Drive. Time has not lessened the pain of this footage, and many of the scenes are difficult to watch.

But there is no growth without pain. Canfield Drive provides a darkened space where we can collectively face that pain in the dark, and even process some of it. I don't think Canfield Drive will change any mind that isn't willing to wrestle honestly with what it reveals. (As Brad's journey shows, some people only recognize oppression when their oppressor stands on their throat for the first time.) For the rest it provides understanding, compassion and a little bit of hope — and those are much-needed gifts.