Photos by Johnny Fugitt
The "White House Roll" with salmon instead of white tuna.

Change is a constant at most restaurants, but the majority appear to have a rehearsed system, polished space and established menu in time for a soft open. This isn't the case at Sushi Station, the new spot at 29 North Gore Avenue in Webster Groves.

First, Sushi Station isn't quite set in its routine. There was a lot of discussion between staff, who seemed much busier than they should have been with a mostly empty restaurant.

Second, the menu does not appear to be set. The temporary menu comes in a plain manila folder. Our waitress recommends the "Chef Special" roll, but when pushed to choose something on the menu, recommends the "White House" roll. Sushi Station was out of white tuna during our visit, however, so ours came topped with salmon.

The space is the one thing that appears to be set. While minimalist, it would be a shame to cover the natural woods, deep grays and bright whites with art. At most sushi restaurants, the patron can only see rolls prepared across a counter. At Sushi Station, a few seats to the side of the sushi bar offer an unobstructed view of the chefs' workspace. These are the best seats in the house.

Even though Sushi Station is one of the rare restaurants that visibly appears to still be putting the pieces together, it wasn't a disappointing First Look. In some ways, it's exciting to witness the restaurant coming together and it feels like a real soft opening.

Pui Nammakhot, a co-owner and manager who previously worked at another local sushi restaurant, says the restaurant has had a "very good welcome to the community" and that friends are telling each other about the space. Business is picking up solely by word of mouth.

It's too soon to say for sure, but the favorites at Sushi Station might end up being its non-sushi offering. We tried the chicken teriyaki, which is as tasty as it is beautiful. Many teriyaki dishes come with a vegetable -- often bok choy or broccoli -- but we appreciate Sushi Station's fresh salad which lightens up the dish and makes for a more interesting combination of flavors. 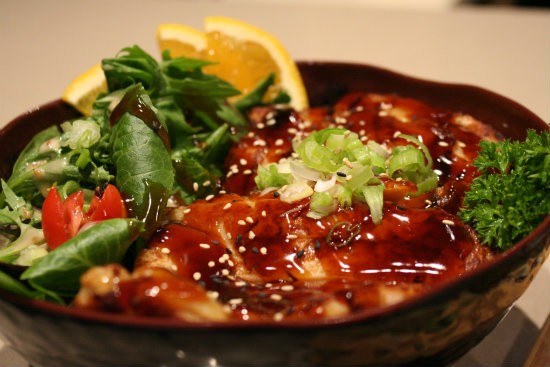 No date has been set for the grand opening, but Pui estimates that it might be around the second week of September.