SCREENSHOT
Tom "Papa" Ray explains the difference between a 45 and an LP — and why they'll always be superior to mp3s.
The video opens on the inside of Vintage Vinyl. The lights are on but the record store is empty, save for a single man — Tom "Papa" Ray, the shop's owner — who stands on the slightly raised perch behind the DJ booth on the right-hand wall. Holding a pair of records aloft, he speaks in an instructional tone.

As the familiar crackle of the opening seconds of Oliver Sain's "St. Louis Breakdown" rises in the background, Ray addresses the camera directly.

"The question is: What else are they lying to you about?"

So begins the first episode of Papa Ray's Vintage Vinyl Roadshow, a fledgling production focusing on one of St. Louis' most beloved institutions and the man who has owned and operated it for decades. Ray has joined forces with a group of producers and media professionals in the hopes of turning it into a series. With networks showing early interest after a November trip to Santa Monica to shop the concept around, the team has already begun filming 22-minute shows in earnest.

SCREENSHOT
The title card for the show.
The idea could have been a disaster. Its seed was planted three years ago, when a former Vintage Vinyl employee-turned-producer pitched Ray on a reality show centered on the store. But current staffers rejected the concept.

"I was at first surprised, but then admiring of my staff for refusing to have anything to do with it," Ray says. "So I said to this guy, 'If all you want is a record store as a backdrop for the obnoxious mating habits of twenty-somethings, that ain't happening.'"

The idea still lingered in Ray's mind, and with a new producer by the name of Brad Hodge, he came up with a concept that would be less Real World and more of a docu-series focused on the independent record store as a cultural entity.

"The pitch I was giving was this," Ray says. "What does it mean to be an independent urban record store in a city that is one of the great foundation cities of music in the world — we gave the world ragtime, jazz, blues, soul, rock & roll, gospel — and yet somehow is always in the top-ten list of cities to avoid? Especially after Ferguson, we are now branded as the Selma, Alabama, of the 21st century. So what does it mean to be that rarest of things in a city like that: a racial neutral zone? And what is the connection of music to culture, culture to music?

That final question plays an important part role in the first episode's outset, with a slew of customers, employees and musicians alike recounting their earliest vinyl purchases. Josh Peyton, the eponymous frontman of Reverend Peyton's Big Damn Band, for example, cites his first as a Prince record, though he quickly admits he had no idea who Prince was and just thought he looked cool.

From there the episode explores the history of Vintage Vinyl, splicing in archival footage and videos from in-store performances and signing events. There are shots of Jeff Tweedy, Megadeth, Slayer, Linkin Park, the Flaming Lips, Rob Zombie, the Black Eyed Peas, Ike Turner, and on and on.

We're told of the time Queens of the Stone Age gave a midnight performance at the store; the time the Beastie Boys arrived sans entourage and dropped some $300 on jazz records; the time Tenacious D did an in-store (Ray informed Jack Black that his turn as an obnoxious record-store employee in the 2000 film High Fidelity was so good, it compelled Ray to update the store's employee handbook with a list of what not to do),

Loop impresario Joe Edwards predictably makes an appearance; he and Ray sit down at Blueberry Hill and discuss St. Louis' overlooked importance as a music city. Chuck Berry, too, gets a fair amount of screen time.

"This is the only place in the world where the term 'St. Louis blues' is taken to mean a game played on ice," Ray laments.

But, ideally, the show won't be centered solely on St. Louis. If it is picked up, Ray would soon find himself doing a fair amount of traveling, with cameras in tow.

"The producer's concept is, after three or four episodes about St. Louis — which I expect to have a heavy social and racial context to it, because that's reality — then take it on the road, go to all these towns that have great independent record stores," Ray explains. "And this is not my words, this is the producer's words: 'I really want to have you out there as the Anthony Bourdain of vinyl.'

"I said, 'Really?'" Ray continues in a skeptical tone. "But I thought about it for a while and I said, 'Well, there's two shows on TV about fucking cupcakes. Why not?'" 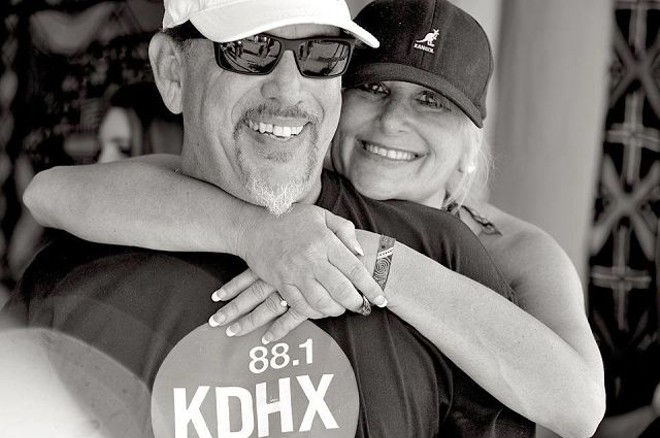 VIA TOM RAY
Tom Ray and his wife Laura, who serves as executive producer for the series, traveled to Santa Monica to pitch the show.
For now, the group is continuing to gather footage for the St. Louis-based episodes while shopping the series around. Ray says some networks have already expressed interest, but he demurs when asked about specifics.

Should the series fail to find a buyer, Ray says he'll be fine. He's plenty busy, he figures, simply running his store.

"If it doesn't happen I'll have more than enough opportunity to continue doing this," he says. "And if it does happen, what I like is that whatever we film about St. Louis, at the end of it, it's going to basically say, 'Yeah, St. Louis may be what people say about us. But motherfucker, we're a great city.'"

[Editor's note: This story was updated after publication to note that the group traveled to Santa Monica to sell the show, not Santa Barbara. We regret the error.]
© 2023 Riverfront Times