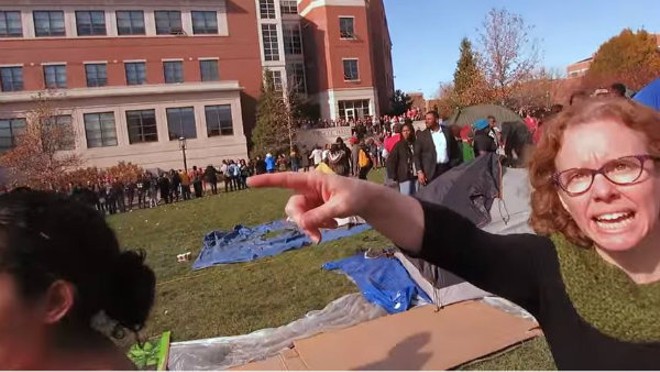 Image via YouTube
University of Missouri Assistant Professor of Communications Melissa Click should be fired, a state senator says.

A Missouri state senator says Mizzou should fire assistant professor Melissa Click and staffer Janna Basler, who were caught on video Monday trying to “muscle” journalists away from student protesters.

“It is incumbent on the University of Missouri to send a strong message that acts of intimidation and violence will not be tolerated on campus,” Senator Kurt Schaefer, a Republican from Columbia, said in a statement.

Not only should the two be canned, he added, but their actions should be reviewed by Boone County prosecutors.

“The conduct of Ms. Click and Ms. Basler constitutes the criminal conduct of, at a minimum, assault in the third degree… as well as attempted false imprisonment… “ Schaefer said.

He may get his wish — at least when it comes to Basler. She was placed on administrative leave from her job at director of Greek Life pending an investigation, Student Life Director Mark Lucas announced on Wednesday.

Click and Basler joined a wall of protesters on the grassy Carnahan Quad on Monday shortly after university systems President Tim Wolfe resigned under pressure from students who claimed he’d done little to fight racism at the college.

In a YouTube video that’s been viewed more than 2 million times, Click and Basler shout at two student journalists and urge protesters to eject them from the public quad.

“You know what? Back off of our personal space,” Basler tells student freelance photographer Tim Tai. “Back off. Leave these students alone.”

Click, who held a “courtesy title" in Missouri’s journalism school, called for protesters to throw the student filming the confrontation, Mark Schierbecker, out of demonstrators' camp site.

“Who wants to help me get this reporter out of here?” Click says in the video. “I need some muscle over here.”


Do I accept the apology? No. The public is owed an apology, not me.


Schaefer, who has lobbied for gun rights and against a study of the 72-hour waiting period for abortions, argued the university shouldn’t allow “acts of violence and intimidation to stifle the free movement of journalists on campus.”

Click and Basler were bashed by critics on the political left and right for their heavy-handed tactics. Both apologized on Tuesday, claiming they got carried away in the emotion of the historic day. Click also gave up her courtesy title in the J-school but, contrary to some media reports, remains a communication teacher at Missouri.

Tai accepted Click’s apology and has lobbied to return the focus to racism at Missouri. Schierbecker wasn’t so quick to forgive.

“Do I accept the apology? No,” he posted on Twitter. “The public is owed an apology, not me.”