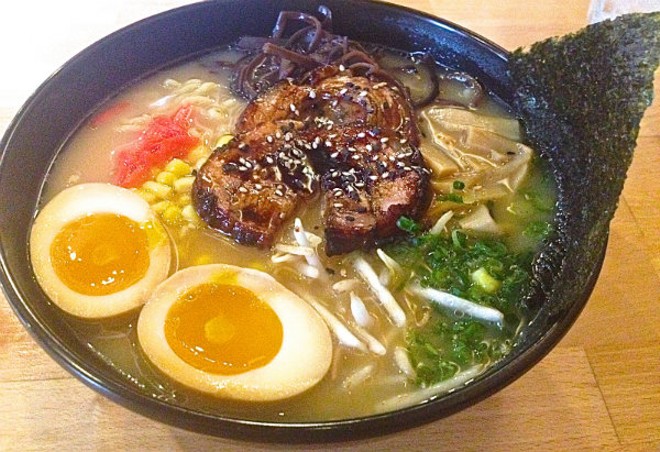 No, the Japanese restaurant will not be shutting its doors. In fact, owner and restaurant veteran Conan Sutton is confident that his eatery is here to say. After opening on Jan. 2, Sutton says it’s merely time for new signage, one that will read "Midtown Sushi and Ramen," a name that is much more inclusive of the food that Sutton and his crew are putting out.

Although the place has been doing ramen since the beginning, Sutton’s decision to leave the noodle dish out of the restaurant’s name was deliberate. He knows how hot ramen is right now. And the omission was for the same reason that he opted for a soft open: he wanted to be able to focus on the quality of the food and getting things right without worrying about an influx of customers.

“Quality is first…the money is way down the line for us. The customers, service and quality of food—those are No. 1,” says Sutton. “That’s why we’re doing this restaurant.”

While this place is Sutton’s first go on his own, he has a host of experience, working in kitchens including Seki's, Sekisui, Wasabi and Blue Ocean Sushi. But his "quality-first" philosophy goes back even further, to his mother Michiko, a Japanese-born chef who moved to the U.S. about 40 years ago from Fukuoka. The food they make at Midtown, including the traditional pork ramen, takes its cues from the Hakata region near Fukuoka.

Including that Hakata ramen, there are four ramen dishes customers can choose from. This Hakata noodle bowl is dressed with components including a slow-cooked egg, bamboo, green onions, corn, bean sprouts and pork belly (smoked next door at Dixon’s Smoke Co.), as well as a slurp-worthy broth. It’s a dish that Sutton says is truly authentic thanks to his mother’s roots in the region and the ingredients they use.

But if you go to Midtown Sushi looking for sushi, don’t worry—there are plenty of options to choose from. Visitors can order from 20 regular rolls, including classics like the spicy tuna roll, and 10 additional specialty rolls such as the Mr. Miyagi, with tempura shrimp, crab mix, asparagus, spicy tuna, jalapeno, spicy mayo and eel sauce. 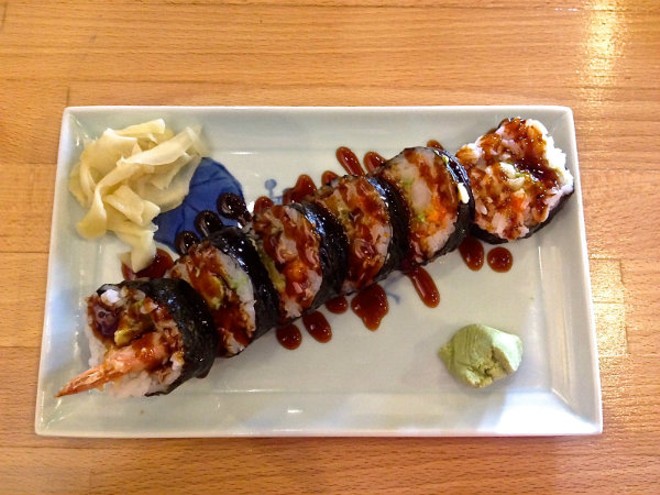 Emily Higginbotham
A shrimp tempura roll made with cucumber, avocado and eel sauce.
In addition to sushi and ramen, the menu takes on the cuisine that Sutton calls “Japanese kitchen food.” These dishes are more old-school, a series of traditional dishes that make up the every day diet of the Japanese. When the sushi craze hit the U.S., it was dishes like karage (spicy, crispy chicken breaded in rice flour) and nabe yaki udon (udon noodles in broth with egg, tempura shrimp and fish cake) that were forgotten. Midtown Sushi has it on offer, and says this kitchen food separates his restaurant from other Japanese restaurants in St. Louis.

“We’re not a fusion, we don’t want to be a fusion. Every Japanese restaurant that opens up now has to be a fusion," he says. Of traditional Japanese food, he adds, "that’s all we know." 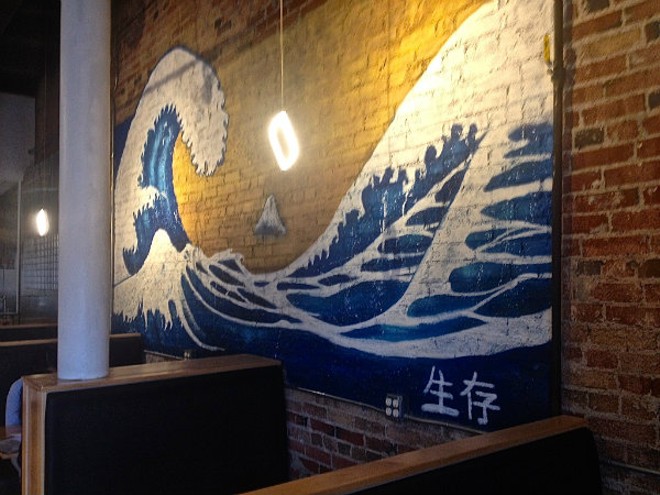 Emily Higginbotham
The tsunami mural brings bright colors to the wall at Midtown Sushi.
The 50-seat restaurant adds a twist to the traditional exposed, brick buildings of Midtown with a tsunami-inspired mural on the main wall. The décor is simple, another testament to the restaurant's concentration on its food.

Currently, Midtown Sushi offers dine-in and carryout options six days a week (Monday through Saturday) from 11:00 a.m. to 9:30 p.m. Delivery is soon to come. Expect a grand opening when Sutton decides the place is truly ready. Some things just shouldn't be rushed. 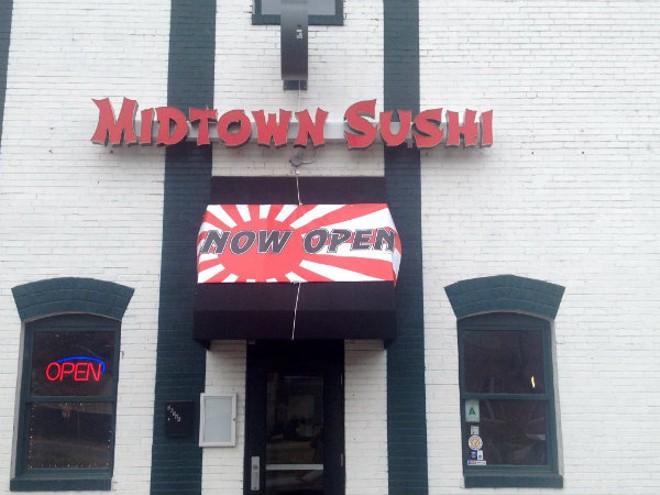