Born to a second-generation drug addict in a state that does little to regulate painkillers, Lacey Kertz's son hardly had a chance 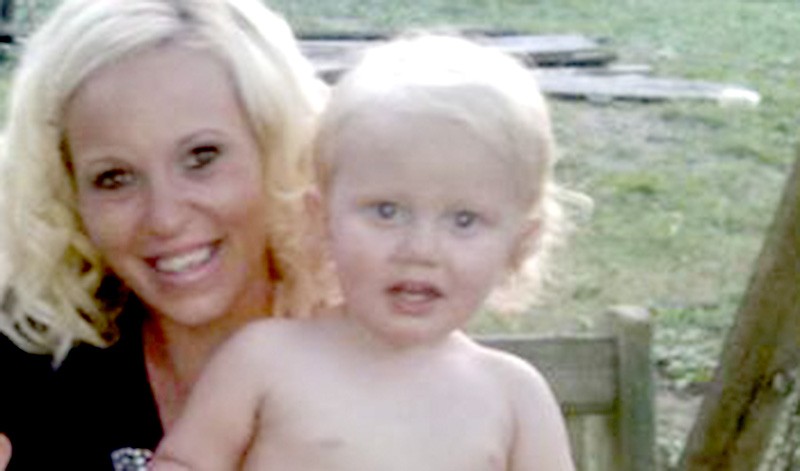 COURTESY OF LACEY KERTZ
Lacey Kertz and her son Carson in happier times.

The mobile home that Lacey Kertz shared with her father Charles Politte and 22-month-old son, Carson, was tucked between oak-covered hills in Jefferson County, miles away from the nearest town. The trio lived in disarray, without working toilets. Cigarette butts littered their floor.

On October 27, 2013, Kertz made a trip to Walgreens, where she picked up photo prints of her boys and purchased materials for a potty chart. She spent the afternoon with Carson and his father, Neil Swyres. Together, they shared a twin-size bed in the trailer, eating McDonalds and watching SpongeBob SquarePants: Halloween. Swyres left after sunset; as a registered sex offender, he wasn't supposed to be around children.

That night, Carson had trouble sleeping. "Up and down, up and down, up and down," Kertz would later recall to detectives. Kertz fed her son Children's Tylenol for whatever discomfort he may have been feeling and two capsules of Nature's Bounty Super Strength melatonin to help him sleep. At one point she let Carson put "her nipple in his mouth," as she describes it to the RFT, for comfort. Police and newspapers called it breastfeeding. Kertz maintains that her son did not nurse.

Some time that night, Carson found an open pill bottle. It was labeled Xanax, but actually contained the sedative Trazodone. When Kertz caught her son rummaging through her pills, she panicked. She stuck a finger down his throat in an attempt to induce vomiting.

Carson didn't vomit, but drops of blood did appear on Kertz's finger. Convinced no pills were missing from the bottle, she decided against calling poison control.

Carson stayed up past midnight, wheezing, as he lay by his mother in her bedroom. Kertz feared the paranormal. So when her little boy pointed towards "Santa! Santa!" and all Kertz saw was wallpaper, the two retreated to the master bedroom where the boy's grandfather was sleeping. Mother, grandfather and son shared the bed for a moment before Politte asked them to leave. As Kertz carried Carson away, the boy called out, "I love you, paw paw."

Kertz blew up an air mattress in the living room, where spirits didn't seem to haunt as heavy. She called a friend and told him about the pill bottle Carson had found. Her friend assured her everything would be all right.

After hanging up the phone, Kertz told Carson, "I love ya buddy." He responded, "I love you too." They drifted to sleep.

When Kertz woke the next day, her son lay next to her, unresponsive. Brown "throw-up stuff" crusted around his lips. Kertz screamed. Running out of his room, Politte implored his daughter to call 911. She did so at 11:02 a.m.

Eight minutes later, paramedics rushed Carson to St. Anthony's Medical Center in south county. He was pronounced dead at noon. Doctors would later give the cause of death as morphine intoxication. A medical examiner would also detect traces of amphetamine, meth and opiates in Carson's system; Kertz's urine tested positive for morphine.

In May 2014, seven months later, Lacey Kertz would be charged in the death of her son — and headlines would insinuate that the fatal dose of morphine had been transferred through breast milk.

Born to a second-generation addict and registered sex offender, raised around drugs and dysfunction, and failed by state agents who were supposed to protect him, Carson's chances stood low from the beginning.

But as the cycle of neglect running through his lineage terminated abruptly with a three-foot casket and seventeen-year prison sentence, experts who've taken a closer look at Carson Swyres' short life have concluded: It didn't have to end this way.

Lacey Lynn Kertz was born on September 13, 1987 to parents who were both drug addicts. Together, Charles Politte and Jerri Anderson used pot, pills, crack, meth, and booze, Kertz says. Politte was absent, and Anderson was often high, so Anderson's mother raised Lacey until she died of cancer in 1996, when Lacey was nine. From that point, Kertz says, "I had to be a parent for myself."

Three years later, social workers removed thirteen-year-old Lacey from her mother's custody, citing medical neglect. Investigators determined that Anderson had been helping herself to her daughter's pain medication, which had been prescribed after a car accident two years before.

While child protection agencies in most cases aim to reunify children with their birth parents, neither parent ever took the necessary steps to bring Lacey back into their custody. Even though both parents were alive, Kertz would remain a ward of Missouri until she aged out of the system, an experience faced by 26,000 American children a year, according to the child advocacy organization Jim Casey Youth Opportunities. A landmark study found that children who enter adulthood straight out of temporary foster care encounter significantly higher rates of homelessness, unemployment and involvement in the criminal justice system.

Kertz never settled into a permanent home. She bounced between families, living with an aunt, some church friends, a Big Brothers Big Sisters mentor and a middle school librarian. Of her many guardians, the only constant through the years was Betty Helms, with whom she was placed by state workers and lived with from 2001 to 2003.

Helms was present for every milestone in Kertz's life: a hospital stay, a birth, a sentencing. She was willing to take in just about any child who needed a home as long as they followed Christ and her chore chart. Many of those children, now grown, still refer to Betty as "Mom" and her husband James as "Dad." (James Helms died in 2014.)

Despite her unsteady home life, Kertz wore a smile at school. She made good grades and plenty of friends, who called her "Lace." She studied ballet, played tennis and practiced the oboe. But she found her place cheerleading for the Dragons of De Soto High School. "I was good at it, and I could just be myself." After classes, she worked part-time at a casual seafood joint called Off the Hook.

On a summer day between her junior and senior year of high school, Kertz finished a dance rehearsal in Farmington, grabbed lunch at Taco Bell and drove herself home to De Soto. A sedan suddenly swerved over the median and collided into her then-foster dad's Ranger head-on. The other driver, a man named Bryan Conway, died in the accident. Kertz woke up at St. Louis University Hospital with a broken femur, torn colon, orbital fractures and a missing front tooth. "I missed my recital," she said upon regaining consciousness.

Doctors reconstructed parts of her face and put screws and a rod in her leg to treat the fracture. Helms thought they did a marvelous job, but Kertz felt "so much uglier," she tells the RFT. The physical effects of her accident would also linger for years to come. "Sometimes my face still feels like somebody is taking a needle and stabbing me," she would explain in a deposition two years later.

While she was still at the hospital, a physician prescribed her Percocet and Vicodin. Pills helped ease the pain. She also enjoyed certain side effects. "I remember taking a Vicodin and thinking, 'This makes me want to hug everyone,'" she says.

At eighteen, Kertz won a $100,000 settlement from Conway's insurance company. That's more than four times Jefferson County's annual per capita income. She moved out of foster care and into a townhouse. She bought a Jeep Liberty and a $400 homecoming dress. (Her senior class crowned her queen.)