Prince's sudden death at age 57 on April 21 was shocking and cosmically unjust, to be sure, but something about the Internet's communal grief made it seem as if the Artist himself was getting the last laugh. Thanks to what I always assumed was a stable of lawyers in a bunker somewhere in Paisley Park, Prince's online presence was nearly nil; YouTube was routinely scrubbed of any copyrighted material, and unless you bucked up for Tidal's premium platform, streaming was a dead-end too. By and large, you had to own his records to grieve properly. For a musician who fiercely guarded his output, this felt a little like justice.

Of course, terrestrial DJs were there to help the mourners; on the afternoon of Prince's passing, you could flip between (Old School) 95.5 FM and 100.3 FM (The Beat) to hear a lovingly crafted set of hits and rarities. DJs on the stations shared recollections and honored requests, and the moment typified the relationship between a DJ and its audience. No algorithm can compare. 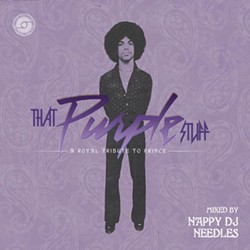 Nappy DJ Needles is no stranger to the healing power of a well-curated mix. He's been an active turntablist and mixtape-maker since 1998 and currently hosts shows on both KDHX (88.1 FM) and Hot 104.1 FM. While his style usually runs to what he calls "new rap alternative," on the night of April 21 Needles posted a 70-minute, 20-odd song love letter to Prince in the form of That Purple Stuff. While the mix was initially created in 2012 and released as The Purple Tape, Needles re-christened it and put it on his Mixcloud page, where it was played over 1,200 times in its first week.

Needles, born James Gates Jr. in 1976, came of age right when Prince was in his cultural ascendency. He recalls getting down to "Controversy" and "Little Red Corvette," though Needles recognizes the release of Purple Rain as the moment when "the powder keg blew," he says.

"I was really impressionable, I was probably way too young to listen to stuff like that — I was seven or eight," remembers Gates. "I remember being in third grade and all the kids saying that they had seen Purple Rain — my mom didn't let us go see that as kids, and rightfully so. So I distinctly remember kids talking about and everyone loving the record."

His father, Gentleman Jim Gates, is radio royalty in St. Louis, so the young Needles had access to all the records he could get his hands on. That included the movie's soundtrack, which included some R-rated material. "I remember playing the record on our floor-model record player," Needles says. "I remember listening to 'Darling Nikki.'"

Needles' mix is a fluid, up-tempo tour through Prince's golden era (1978 through 1988), a cache of songs that, admittedly, is hard to screw up. But Needles finds ways to let these songs talk to each other; a four-song stretch that begins with the aggressive funk of "Alphabet Street" winds its way to the iconic SONAR-ping drum track of "Sign o' the Times." For Needles, Prince's refusal to stay boxed in by genre was both an inspiration and a challenge for a mix-master.

"With "Kiss," you couldn't pinpoint what genre that is," says Needles of the 1986 Billboard No. 1 single. "Lazily, pop is the best way to call it; it's the melting pot of genres. I remember thinking this was some classic rock type stuff with those guitar licks — but it was the '80s. I didn't know the term throwback, but it had this distinct sound and I really dug."

That Purple Stuff has its genesis in 2005, though thanks to a combination of what Needles calls "uber-perfectionism and procrastination," the mix remained unfinished until 2012. That was the year that Needles threw his first Prince-only party, an event that has become an annual highlight. This year's celebration, planned well before Prince's passing, will take place June 10 at 2720 Cherokee.

"Obviously this one is really heavy," he says of the upcoming party. "I never wanted it to be a memorial party. I'm OK with memorial parties, but I definitely wanted to do a party for people that were still living, so that we didn't have to wait until they died to celebrate them. It happens a lot — people don't get celebrated until they die."

Prince, of course, was different. "When you're that much of a genius, you have that right to do that," says Needles.

Stream the mixtape in full below: