On the morning of July 16, in a south city bar, the youngest member of the Democratic City Central Committee raises her hand to address her colleagues — at least, the half that has bothered to show up.

It's Lori Lamprich, a tattooed 33-year-old dubbed the "Hipster Committeewoman" by some older members. While a handful of attendees linger over the steaming breakfast buffet, Lamprich announces that her constituents want Hillary Clinton yard signs. She asks the executive board: Is there any budget for that?

The answer, as she hears it, is a lukewarm "maybe."

"It's frustrating," she says afterwards. "I was trying to proactively do something to help the party, and I felt like nobody else wanted to do it."

It's that feeling of helplessness that has a group of young Democratic Party activists plotting a committee takeover on August 2. If the old guard can't be more proactive, they suggest, maybe it's time for voters to show them the door.

The city of St. Louis is still a stalwart island of blue in the Midwest's sea of Republican red. Metropolitan voters have stacked City Hall with Democrats for decades, and majorities reliably pick liberal candidates for state and federal office.

Yet for all their political loyalty, voters don't know much about their party's formal apparatus here: the "central committee." Nor could they easily learn about it, for it has no working website.

Now a loose coalition of like-minded young lefties, many of them fired up by Bernie Sanders and the Black Lives Matter movement, are storming the gates at levels unseen in 30 years.

Under Missouri law, political parties must keep a committee in each county, with members drawn from that county's building blocks, called "townships." The city of St. Louis isn't a county per se, but gets treated like one in state statute, so it must have a committee, too — only its building blocks are called "wards."

So in the city's 28 wards, residents head to the polls every four years to pick one man and one woman (and yes, those gender quotas are dictated by statute) in the August state primary to represent their ward on the committee. The next time they do it will be next Tuesday.

Typically, primary turnout is low, and most candidates glide into office unopposed. Not this year. Of the 56 committee seats, 28 are being contested by a combined 87 candidates — the highest level of participation since 1984, according to a Riverfront Times analysis of election data.

Why all this jockeying? After all, the job is unpaid. And the law only endows it with a handful of duties. Perhaps the most consequential: In the rare case that certain state and municipal Democrats resign from office, committee members get to pick the new candidate — which usually means, in this Democratic stronghold, that they anoint the successor.

But it's precisely this low-level politicking that excites the first-time candidates, most of them under 40. They want more zeal and transparency. They want, in 2016, a website. And they yearn to serve as the official Democratic foot soldiers on the sidewalks, front porches and polling floors of their wards.

The central committee's handbook urges this. It calls on every member to be "a 'walking encyclopedia' of political facts," a Democrat who canvasses, educates voters, visits them personally once a year, registers new ones, converts young people to liberal thought and shepherds everyone to the polls on election day. "Being a good committeeperson," the handbook reads, "is a 365 day-a-year commitment." To the insurgents, the sitting committee has simply dropped the ball. And for these Berniecrats, the critique isn't just about logistical effectiveness. It's also about ideological purity. They wish to challenge the city's DINOs, a.k.a. Democrats-in-name-only.

"Some days, we [as a city] are very progressive, flying the transgender flag over City Hall," says Tony Zebrowski, a candidate for Eighth Ward committeeman. "But other days, we're giving out huge tax breaks while our schools go unfunded. I want people to feel like being a Democrat means something."

Mike Kelley, a political consultant and former chairman of the Missouri Democratic Party, says it's still unclear whether the insurgents are running further to the left than St. Louisans are willing to go.

"More people wanting to fight for progressive causes is a good thing," he says. "The big question is: Can they succeed? The proof will be in these upcoming elections." 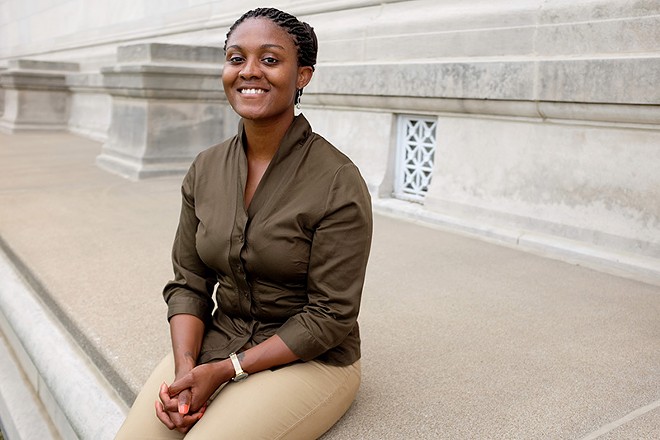 PHOTO BY HOLLY RAVAZZOLO
Rachel Johns, who is running in the 27th Ward, is one of an unprecedented number of challengers vying for Democratic Party committee seats.