Meet Murmuration, a New Kind of Festival for a New St. Louis 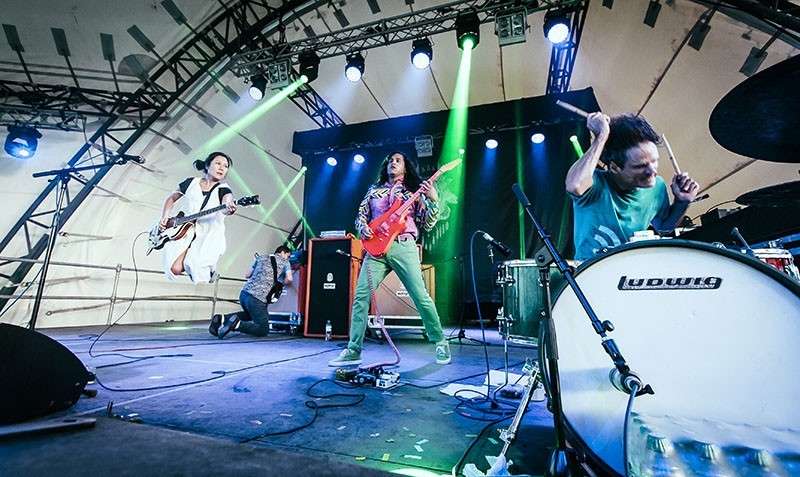 PHOTO BY ASHA SHECHTER
Deerhoof is just one of the forward-thinking acts playing this year's first-ever Murmuration Festival.

As the summer music festival season winds down, St. Louisians can be thankful for the strides the city has taken in accommodating major outdoor events. The collapse of the Summer Rocks partnership and the Chesterfield exile of Bluesweek were both countered by a renewed, all-local Big Muddy Blues Festival over Labor Day weekend and a LouFest that drew throngs to the muddy Forest Park Central Field for two well-attended days.

And now comes the inaugural year of Murmuration, to be held September 23 to 25 — a festival like the aforementioned in tongue-twisting name only. A joint venture between the Cortex Innovation Hub and LouFest founder Brian Cohen, Murmuration (the word is a synonym for both murmuring and a flock of starlings) aims to fuse TED-like panel discussions, techy expos, public art, science demonstrations and ten bands that only the most assiduous Pitchfork readers and art-school hopefuls will immediately recognize.

Murmuration, in short, poses no threat to Ribfest.

The idea for the weekend began last fall, when Dennis Lower, president and CEO of Cortex, approached Cohen about a public event that would combine music, innovation and technology. For Cohen, it was the perfect time to dive into a new venture.

"Five years is my sweet spot for building something and getting something off the ground, and then moving on to the next thing," says Cohen. "I knew I wanted to stay in music. I knew I wanted to do something more urban, to get out of the park, and I've always had an interest in public art. The people at Cortex and I each had ideas about what we wanted to do, so it was just finding common ground, and then things came together quickly."

Along with Lower, Travis Sheridan from Venture Café and Phyllis Ellison and Áine O'Connor from Cortex developed the "thought" side of the programming, while Cohen, along with Jeff Jarrett of Contemporary Productions, worked on the music side. The events will take place in both ticketed and free spaces in and around the Cortex grounds, fanning out from the intersection of Duncan and Boyle on the south edge of the Central West End.

When Cohen was getting LouFest off the ground nearly ten years ago, the logistics and themes of Murmuration — the predictive power of art, big data and social change, robots and humanism — would have sounded like science fiction, if not pure fantasy.

According to Cohen, Murmuration will be able to support 10,000 attendees per day, with some streets around Cortex blocked off for the outdoor events. But given the esoteric nature of much of the music and the density of its intellectual concerns, a sizeable target audience might prove elusive.

"We think about demographics, but our audience is anyone with a curious mind," says Cohen. "If you're in St. Louis this weekend and you have a curious mind, I think this is where you want to be. There are different ways to plug in, to get up to speed with virtual reality, with robotics, with big data. The great thing about festivals is the journey of discovery. Maybe you came to see Flying Lotus, but along the way you pass by the future innovator zone and see this large scale Rube Goldberg Machine and you play with that for a while. For me events are successful when promoters create multiple ways in and out of the festival."

Cohen acknowledges that articulating the vision of Murmuration, explaining why it's both interesting and accessible, is one of the organizers' biggest challenges.

"In the early years of LouFest there was a significant effort just in educating the public about what it was," he reflects. "It did take a couple of years for it to gain traction. But the people that came in the early years fell in love with it. I felt all I had to do was get people through the door and the event would sell itself. But how do you get people through the doors those first years? That's a challenge for any event, especially if it's a concept that's new to the city."

Adding to that challenge is the fact that, on the music side, Cohen knew he couldn't book merely based on draw. His goal was to feature bands genuinely connected to the event's core themes. Along with a number of artists in the electronic field — including Flying Lotus (a.k.a. Steven Ellison), who makes his first appearance in St. Louis since 2010 — Murmuration will feature a host of experimental rock bands, headlined by San Francisco-based Deerhoof, which has been confounding audiences for two decades.

This year the band released two albums, the frequently and surprisingly catchy Magic and the gorgeous and elegiac Balter/Saunier, a collaboration with Chicago-based contemporary classical composer Marcos Balter. For Deerhoof guitarist Ed Rodríguez, the compositional restraints opened up new approaches.

"For me, as a performer, it was challenging to play in a stricter environment," Rodriguez explains via email. "I've always been in bands that never even had a count off to start a song; we'd just GO! And following a conductor for tempo and phrasing was quite a change!"

On the album Magic, Deerhoof sounds as free and spontaneous as it ever has, while exploring some of its most engaging tunes. This isn't Deerhoof the garage band, but it is Deerhoof fully enjoying making rock music as a band of rockers.

"We normally discuss every little aspect during the brainstorming for the next album," says Rodriguez. "But this time we played it more loose. While on the road we'll discuss how the music is going at that moment, what aspects we're having the most fun with and what we would like to do more of. Usually we pick themes, feels or emotions as guides, but this time we decided to just bring in whatever material we had, no matter how tiny or fully realized the idea was. We just had fun working on the songs, enjoying the magic of each moment together."

When Deerhoof takes the Murmuration stage on Sunday evening, it will be reinventing the sounds and forms that have made it instantly recognizable, even through the noisiest, most improvised layers. For Rodriguez, it's the unexpected experimentation that's most rewarding.

"Sometimes when you record you just have a magical moment," he says. "But once the tour begins, you need to create that magic every night. In that way you need to deepen your relationship with the song to have the desired emotions delivered in a carefree and fun way. You can't be worried about a part that's coming up because that changes how you're playing the part you're in at the moment. All the songs are fun for me to play because they never stop changing, and everyone is trying different things throughout the night. Playing with people that constantly surprise me keeps each night from becoming just another show."