Here's What the New York Times Missed in Its 36 Hours in St. Louis 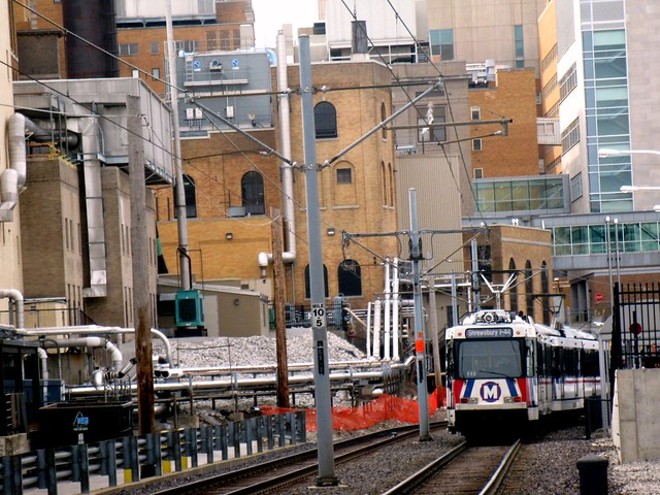 FLICKR/DAVID WILSON
St. Louis has more to offer than could possibly fit into 36 hours. We've got ideas for how to spend four hours more.

So the New York Times came for a 36-hour visit, and we're positively blushing about all the great things its writer had to say about our city. St. Louis, writes Elaine Glusac, offers not only a "once-quiet, now-vibrant downtown" but also "new restaurants, microbreweries and a rich array of cultural venues, including a museum that pays tribute to the blues." And things only got better from there, with a packed itinerary featuring everything from the new museum at the Gateway Arch (duh!) to the City Museum, Forest Park, and food favorites Schlafly Tap Room, Vicia, Balkan Treat Box, Cinder House and Half and Half. We wouldn't argue with a single pick.

At the risk of being nit-picky, the Times' agenda is clearly designed for the less adventurous traveler. There's not a thing on this list to do after 10 p.m., much less anything the Chamber of Commerce couldn't have told you about. (Writer Glusac also got one thing wrong, as we'll explain below.)

For a younger, more interesting, and dare we say hipper addition to the Times' guide, we'd recommend our recently published City Guide, which offers an insider's look at the city, from the Bosnian delights of Bevo Mill to a look at our non-traditional scene.

Narrowing things down further, we asked RFT staffers for their picks of what they'd add to the Times' itinerary. If they could persuade the Times' traveler to stay for just a few more hours, or stay up just a wee bit later, what would they do? We've rounded up their picks below.

See a show at Delmar Hall
For live music, check out Delmar Hall (6133 Delmar Boulevard, 314-726-6161). Conveniently located in the Delmar Loop entertainment and shopping district, the 750-capacity music venue consistently books a solid mix of up-and-coming artists on the national scene (Kurt Vile and the Violators) while also highlighting St. Louis' local musical superstars (Grace Basement, Mvstermind). After the show, grab a drink at the Moonrise Hotel's rooftop bar, where the party lasts til 3 a.m., and those very same artists may well be winding down with a cocktail. —Jaime Lees 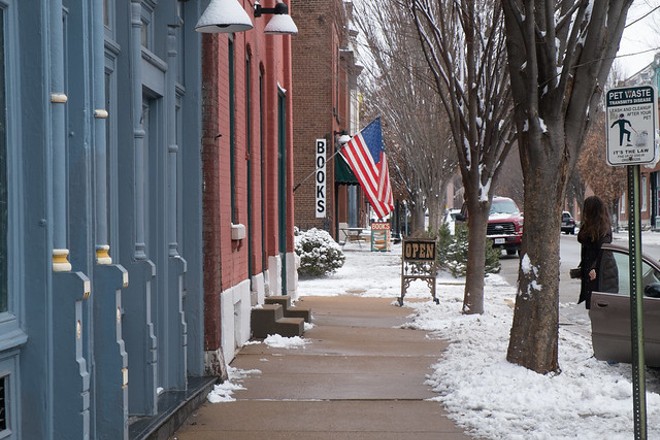 Stroll Down Cherokee Street
To get a sense of what hip art life looks like when it’s not on the coast, spend some time on Cherokee Street. It’s got the communal unity, small-business chutzpah, artistic zeal and political activism of East Coast hot spots, but the storefronts still have space available and the rents are still affordable to the average bar-back. That means the street is teeming with artists, activists, and upstarts of all colors and backgrounds. Sit down for a meal at Mud House (2101 Cherokee Street, 314-776-6599), which is known for its excellent and under-priced menu, and you'll inevitably overhear meetings about new projects or the band practice that just ended. Stroll up the street towards Counterpublic, the installation project underway at the Luminary (2701 Cherokee Street, 314-773-1533), and you'll pass art studios, practice spaces, a music venue, head shops, Hop Shop's stringently curated beer gallery, and knots of twenty- and thirty-somethings talking art and business. If you’re looking for a place that actually gives Williamsburg a run for its money, Cherokee Street starts as a surprise and quickly becomes seductive. —Evan Sult

Drop by a top-notch St. Louis brewery
The James Beard Award-nominated Side Project Cellar (7373 Marietta Avenue, Maplewood; 314-224-5211) is much more than a place to taste beer. Designed as a Belgian-inspired tasting bar for the acclaimed Side Project Brewing's beers, the Cellar offers the attention to detail you'd expect — temperature control, proper glassware and service standards — from a place dedicated to pouring what many beer nerds consider some of the best beers in the world. Wine and whiskey are available, too, but there is no resisting the barrel-aged brews that have developed a cult status. —Cheryl Baehr 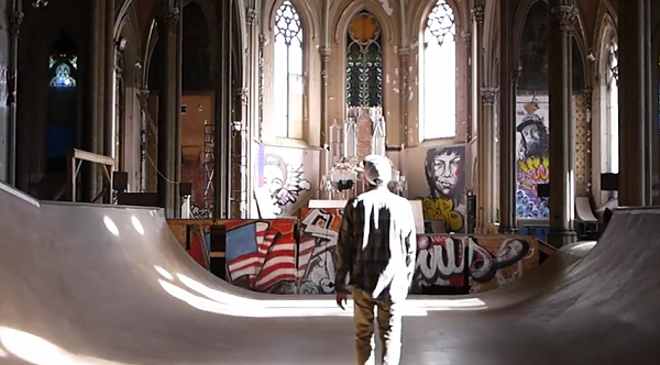 SCREENSHOT VIA DANIEL FLORIAN
How many cities have churches as cool as Sk8 Liborius?

Visit our temple to skateboarding
The population decline of St. Louis city over the course of the 20th century left behind numerous gorgeous structures that, over time, have fallen into disrepair. One pulled back from the brink is the St. Liborius Church (1850 Hogan Street), built north of downtown in 1856 and left vacant in 1992. In recent years the edifice was purchased from the city's land bank for cheap and has since been taken over by skateboarders and artists, bringing soaring ramps and breathtaking graffiti murals to intermingle with altars and stained glass in the space where a congregation once came to worship. Now known as Sk8 Liborius, the unique skate park has met with the approval of no less than Tony Hawk himself, and even served as Lil Wayne's post-show destination during a recent trip to town. It's a new congregation that gathers here now, but one that is no less devoted. —Daniel Hill

LOL at some first-rate comedy
NYC may be overrun with stand-up comics sharpening their best five-minute sets, but what St. Louis has in the Improv Shop (3960 Chouteau Avenue, 314-652-2200) is something special: a sprawling circus of talent and weirdness that shouldn't be missed. This isn't a place for comedians opining about airplane food or tour-weary B-list celebrities, but a crucible of the city's best local comics. Don't miss the bizarre, multi-layered talk show Fatal Bus Accident, or the monthly History Shmistory— an "absurd costume pageant" in which comedians deliver stand-up sets as historical figures. —Danny Wicentowski 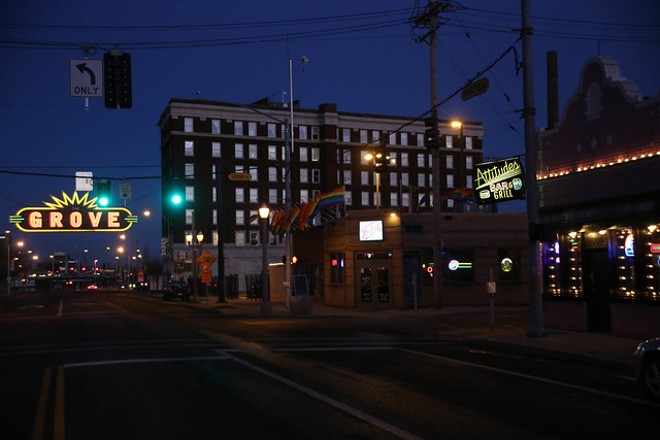 FLICKR/PAUL SABLEMAN
Visit the Improv Shop, now located in the Grove, for some great comedy.

Wander Through a City Neighborhood
Our No. 1 way to wile away the hours with out-of-town friends: Meandering through St. Louis' charming old neighborhoods. Visitors from newer cities like Phoenix and Denver are often struck by the walkable charms of Soulard, Lafayette Square and the Central West End — and the shops and, OK, bars along the way provide plenty of unplanned stops. Stroll down South Grand for a movable feast and a gin bucket. Get some boozy ice cream in Lafayette Square and feed the ducks. Or just drink your way through Soulard, where seemingly every bar has a patio of its own, each more charming than the next. The one at Oaked (1031 Lynch Street, 314-305-8647) just might be the best. It opens this week for the season and already has a roster of live music scheduled. — Sarah Fenske

Survey our theater scene (for real this time)
As the Times notes, the theater is an excellent way to spend an evening in St. Louis. (Although don't go looking for the Repertory Theatre St. Louis in Grand Center — it's been in Webster Groves for the past 51 years.) If you're on the hunt for something new and wild, find out what the YoungLiars are doing. The company specializes in immersive productions that combine cocktail parties and seventeenth-century French plays, and the group loves to mount a show in unlikely places (a white room, a century-old basement, a Midtown loft). ERA is also an excellent option for the unexpected. Artistic director Lucy Cashion favors the experimental and the intellectual, typically with bracing results. ERA's Phaedra's Phuneral was inspired by classic myth and took the form of a series of eulogies, delivered by women from Mary Todd Lincoln to Atlas Shrugged's Dagny Taggart. Up next for the company: Never Let Go, a one-woman version of Titanic that runs April 18 to 27. —Paul Friswold

Get drunk
St. Louis is one of the nation's premier drinking cities, with far more dive bars than its size would suggest, each with an atmosphere all its own. At the Silverleaf (3442 Hereford Street, 314-481-4080), you can get fucked up for less than $20. Slide onto one of this tiny bar's nine stools and enjoy the firefighter memorabilia while you down your cheap drinks. But keep your head, newcomer; the aging regulars are friendly but in no mood for amateur hour. — Doyle Murphy
© 2023 Riverfront Times