Set in North Korea, Under the Sun is Both Propaganda and Exposé 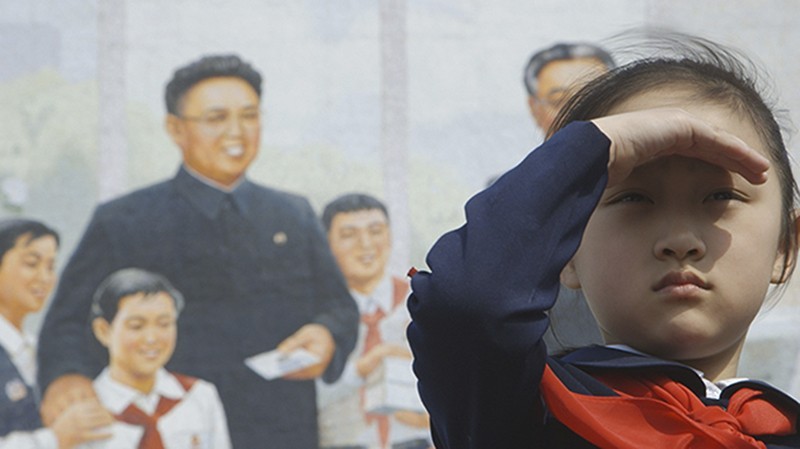 Mark Twain knew that one of the sharpest and most efficient ways of letting the wind out of a self-inflated opponent was to simply use their own words against them. When he wanted to debunk the "science" of Mary Baker Eddy, he did it by playing the role of a naive observer working his way through her ideas and writings. When he wanted to skewer the inflated idealism of a European tour in his first full-length work The Innocents Abroad, he simply devoted four pages to reprinting in full the prospectus for the voyage.

More than a century later, Twain's kung-fu criticism remains an effective approach, expanding into new media as demonstrated by the anti-corporate pranks of the Yes Men, the rediscovery of Scientology's gaudy self-produced videos in Alex Gibney's Going Clear and by the many political commentators who can question authority merely by reprinting the early-morning dispatches of a certain orange-skinned Twitter-happy demagogue. When faced with the outrageous, sometimes the best approach is to lie low and let the outrager set his own trap.

That's the method the Russian documentary filmmaker Vitaly Mansky puts to use in Under the Sun, a revelatory — and at times, almost surreal — portrait of life in North Korea. Mansky wanted to show the ordinary social activities of Pyongyang, but when he arrived there, he was met by government-assigned handlers who provided constant supervision, a list of approved locations and even a written script. It told the story of an eight-year-old girl, Zin-Mi, as she prepares to join the Children's Union on the Day of the Shining Star, a national holiday (the birthday of Kim Jong-Il, of course).

Mansky's response was to follow their instructions to the letter — and then go a step further. Carefully saving his footage on two separate memory cards, he kept the camera rolling at all times, recording not just the stage-managed glimpses of Zin-Mi's family life, but also showing the government supervisors in the wings, feeding lines and demanding retakes. They get their sanctioned view of the loyal, patriotic family beaming under portraits of Kim Il-Sung and Kim Jon-Il — but not without effort.

Their real jobs lacking in nationalist significance, the parents' daily lives are re-written to present the country's industry in a better light; they improvise discussions of productivity and equipment quality, prompted by their obliging co-workers. They sit at an oversized feast that is supposed to represent a typical dinner for a family of three, speaking lovingly of kimchi ("our national food!"). They sing the praises of a locally grown flower — the Kimjongilia. Throughout Under the Sun, you keep waiting for a moment when the masks fall, when the players miss a step or speak out of turn, but it never happens (the closest it comes is when Zin-Mi struggles to stay awake while attending a lecture by a long-winded old general). That's one of the more disturbing things about it.

Though the story of Zin-Mi makes up about half of the film, long segments examine other aspects of Pyongyang, a weirdly postmodern landscape of banal, pseudo-futurist design, where the citizens join in radio-led exercise sessions and elaborate musical spectacles, always under the shadow of reverent/kitschy portraits and sculptures of the two Kims.

In some ways, it's a stranger film for what it doesn't tell us. What could be going through the minds of the hundreds of people dancing in the streets and singing of their devotion to their leader? (How do they learn the songs and the synchronized movements?) Or through that of the young schoolteacher whose students naturally roll off expressions like Respected Leader and Generalissimo Kim Il-Sung and express their distaste for "landholders and Japanese aggressors"?

Mansky has created — or perhaps simply facilitated — a disturbing and intimate look at life under totalitarianism, given an unusual twist by the leadership's strange predilection for fantasy and artifice. It's a complex dual portrait of North Korea, drawing back the curtain behind the official society of image-building and illusion to reveal the cold and ultimately horrifying mechanism behind it.