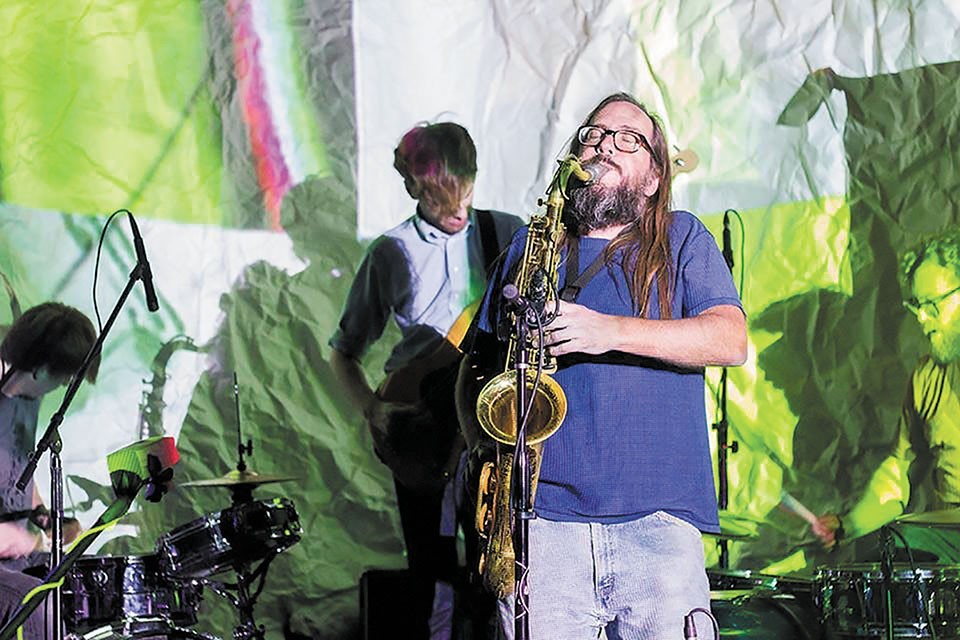 MABEL SUEN
Dave Stone has performed with innumerable musicians in his three decades in St. Louis. But now he's moving on.

Dave Stone, longtime cornerstone of music in St. Louis, is leaving the city for good.

For almost 30 years, the local jazz-saxophone legend has been nearly ubiquitous throughout the city wherever music is heard, collaborating with several symphonies' worth of prominent local musicians and earning numerous accolades along the way. But now Stone is moving to Oregon, about an hour from Portland, after his girlfriend landed her dream job there. He looks forward to playing gigs in LA and San Francisco, as well as any number of other West Coast cities. But St. Louis' scene won't quite be the same without him.

Though Stone is perhaps best-known for enlivening Mangia Italiano every Friday night for more than twenty years, he has played gigs at almost every venue in town during his tenure — including some of the biggest stages in St. Louis.

"I have played the Pageant," Stone says. "We opened up for Yellowjackets, but that was such a weird gig. Bill Lenihan, an amazing guitar player who's at Wash U, called us like that day, or the day before, being like, 'You and Eric [Markowitz] and Maurice Karnes come and play like a half hour before Yellowjackets go on at the Pageant.' And there were all these people there and we were on the big stage, you know?"

It took a while to get to that point. Moving to St. Louis to study jazz performance at Webster University in 1989 (he earned his bachelor's in 1993), Stone played his first gig at Brandt's Café on Delmar Boulevard in 1990, as part of a trio with Liam Christie on guitar and Markowitz on bass.

"We were all like, you know, young and silly — none of us had been playing a really long time," Stone says. "I think it was cool, but we were definitely students."

Studying saxophone at Webster, Stone was introduced by teacher Paul DeMarinis to drummer Joe Charles Thompson and fellow saxophonist Jimmie Sherrod. Both would have a foundational impact on his musical development, he says. He also played a lot with pianist and composer David Parker in those early days, as well as a slew of additional luminaries in St. Louis' music scene. Darin Gray of Dazzling Killmen, Kyle Honeycut, Ben Wheeler, Bob Deboo and Willem Hombracht are all on the long list of illustrious bassists Stone has played with.

During the '90s, Stone moved fast and performed a lot.

"I played at this place, Deep Cool, in the mid-'90s — that was a really fun gig," Stone explains. "It was two nights a week at this huge, three-story club on Washington."

In those early days, he also made frequent trips to Chicago with Ben Vida, Weasel Walter (of the Flying Luttenbachers), Matt Weston and others to take in shows, congregate with other players and play free jazz at venues such as the Hot House and Myopic Bookstore. While there, he even sat in on some impromptu cutting sessions put together by celebrated jazz player and composer Ken Vandermark.

Stone visited other cities during this period, including Minneapolis, where he jammed with Milo Fine (clarinetist of Teenage Boatpeople, whom Stone met through Vida), even performing in Fine's ensemble at a live concert.

Those trips weren't always as carefree as the music itself, however.

"So Weasel was pissed that he wasn't the drummer for this gig [in Chicago]," Stone recalls. "We were playing in this pretty big room and there was kind of a bunch of people there, which was unusual and cool because it's not always like that. So we were playing, and it was going really well, and someone started heckling us in the audience really badly and like, insistently, trying to kill the vibe. I got so upset that I kept playing, but I started walking around the audience to try and find this person.

"It was like this crazy thing; if my back was to them, they would still be saying stuff," he continues. "I think I just wanted to talk to him, to be like, 'What's up, dude, we're just trying to play!' Somebody told me later on that it was Weasel. He was like, 'You guys didn't ask me to do this, so forget you.' I think that's a pretty funny story. That was like '95 or maybe '94."

But jazz isn't the only aural spice Stone has traded in over the years — since the start of his career, he has also trafficked in the noise and rock scenes. During his time at Webster, he played saxophone in the noise improv collective Pound of Flesh with Andy Ortmann (of Nihilist Records), Vida, Parker and Jeremy Brantlinger. From 1992 to 1996, he played bass in the progressive rock outfit Man Igno with Nathan Warren, Aaron Smith and Scott Tallent. In the mid-to-late '90s, he played guitar in the dissident rock band Shiva with Ray Johnson and Mark Lafauce and sax in the noise group Brain Transplant with Ajay Khanna, Chris Smentkowski and Jeremy Melsha. More recently, he has been involved in projects with various prominent local noise and rock artists such as Drew Gowran (Thumpy Sticky) and Brit Lockhart (ISH Ensemble).

It's a staggering résumé for an accomplished artist, one who has consistently refused to compromise in regard to his work.

"I think music is the most enjoyable when you're being the truest to yourself as an individual," he says. "Like, if you're going through the trouble of playing music, you should revel in your individuality."

Stone will play a few shows before he leaves for Oregon, including a final Mangia performance on Friday, April 19. He says he'll miss the St. Louis music scene and his many friends and fans here.

"I think St. Louis is a really, really amazing music place, historically, in terms of diversity and then the depth of that diversity — it's like, there's so many genres that have so many amazing proponents in town," he says. "People really love music here, and they put a lot into it. It's really beautiful. I love it."