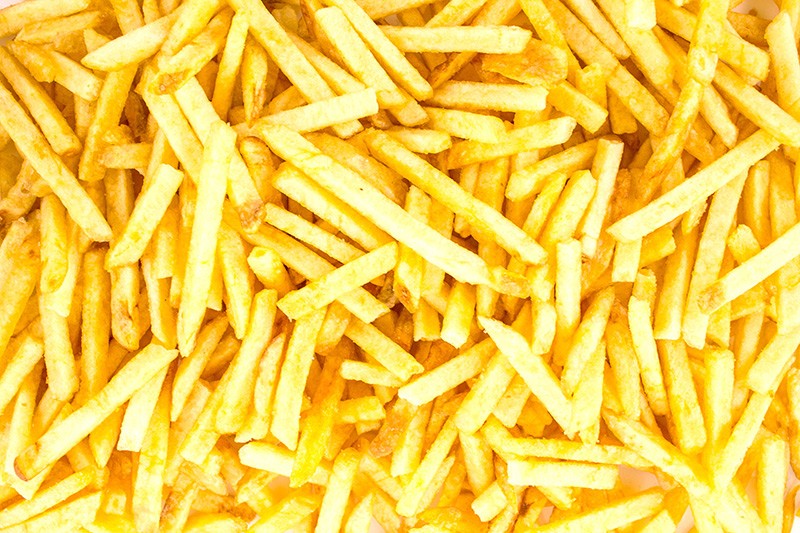 A short, rotund man with a shaved head, he's perched at the edge of the bar playing a digital billiards game on his phone, even though he's no more than ten feet away from an actual, real-life pool table. He relays the same advice that wise, peacekeeping men have passed down for centuries.

"A good way to lose a friend is to talk politics," he says. "It's just such a touchy subject anymore."

Calen's friend Josh is the one who dragged Calen out of the house on this night. Josh is tall, probably about six foot two, wearing a baseball cap with a curled brim and a sweatshirt advertising a landscaping company. As he speaks, country twang on full display, it quickly becomes clear that he does not particularly share his friend's sentiment on this matter.

"Oh yeah, Donald Trump takes his seat tomorrow. Woo!" Josh says excitedly as he scrolls through a social media app on his phone. "I don't follow politics. And I don't really talk politics, but I voted for Trump."

Then he leans in.

"I believe the South will rise again," he declares firmly. "I believe that us Americans are going to go to war with somebody inside America before too long."

A bit taken aback at this prediction of an impending civil war on American soil, I ask who we will be fighting against. Josh looks me up and down and then turns away, staring stone-faced at the backsplash of the bar as he silently takes a drink of his beer.

That's when it hits me: Josh doesn't think we'll be fighting for the same side.

It's the night before the inauguration of one President Donald J. Trump, and I'm in a tiny corner bar attached to a used car lot in St. Joseph, Missouri, some five hours or so from my hometown of St. Louis and about an hour north of Kansas City.

I've made the long journey across the state specifically for this occasion. A northwestern Missouri town of roughly 77,000 people, St. Joseph made national headlines in October when its daily newspaper, the St. Joseph News-Press, became only the second publication in the country to endorse Trump for president. By election day, Business Insider calculated that the number of newspapers endorsing Trump totaled 19, compared to Hillary Clinton's 240. The St. Joseph paper, clearly, was an outlier.

In an editorial headlined "Trump and GOP offer best hope to lead America," the News-Press laid out its case.

"It might seem unlikely, but Trump — a candidate who brags of his wealth — has done much more than his opponent to identify with the needs and interests of people who are struggling and striving for something better for their lives and their children's lives," the paper stated. "Many recognize his business successes far outweigh his failures, and he could use his knowledge and insights to accelerate our historically slow recovery from the recession."

The News-Press also quoted a St. Joseph resident, a woman whose anti-Hillary sentiment echoed its own: "She calls us 'deplorables.' A person like that can't connect with middle-income or lower-income Americans."

In this post-election age, with reporters rushing to the heartland to find the so-called "real America," St. Joseph seemed like a fine place to go, a perch from which to watch the nation changing hands, Obama to Trump.

But I had an additional motive for my visit. St. Joseph made headlines earlier in 2016 for an entirely different, far more compelling reason: The announcement that the "McDonald's of the Future" would open there in August.

A 6,500-square-foot monument to the righteous and noble consumption of fast food, this particular McDonald's would be the largest of its kind in a four-state area, according to owner/visionary Chris Habiger. Construction costs were estimated at $1.59 million. News reports suggested the restaurant would feature a "fast-casual" vibe, in keeping with dining trends, with the inclusion of tableside service and plush couches. Touchscreen kiosks would feature prominently, enabling customers to customize the "burger of their dreams" with hundreds of available options, as Habiger told the News-Press. Habiger said he expected to employ 85 people at the new digs.

But most importantly, most patriotically, most tastily: The restaurant would feature unlimited french fries on its menu.

CHUCHAWAN/SHUTTERSTOCK
In Ronald we trust.

Golden, delicious and beloved the world over, McDonald's fries are more American than the bald eagle, and more popular too. They never disappoint; they never go bad. They hearken back to a time when America was great, when family values and corporate interests aligned in perfect harmony and a simple trip to Mickey D's for mom and dad and their 2.5 kids amounted to good, wholesome family fun. A time when America still made things, dammit! Crispy sticks of faux-potato, maybe, but still.

For my part, I was interested in seeing how many of them I could stuff into my face in one sitting, and the McDonald's of the Future would make this dream a reality. Quite frankly, I don't need to travel to find America. I already live in America. I'm just here for the french fries.

But that's business for the morning. Tonight is the last night in Obama's America and I'm drinking with the locals at Mugshots.

Mugshots, too, recently had its moment of celebrity. In December 2014, Mugshots was inundated with protests after offering a "Michael Brown Special" consisting of six shots ... of tequila. "It's not meant to cause any harm," a co-owner told the local Fox affiliate. "I should have thought a little bit more about it before I made it a shot special." Given the statistically notable overlap between Mike Brown detractors and Donald Trump supporters, it was fair to assume I'd be drinking with some people in a mood to celebrate our new overlord.

Our bartender, Rodney, holds a cynical view of the office of the presidency.

"I don't believe that anybody that sits in the White House really has much control over anything," he opines. "There's a whole lot of money out there that has control over what goes on in this country. And we ain't got a damn say about it. It's whatever those people wanna do. And that guy in the oval office is just a face." Calen nods in agreement.

On the subject of McDonald's fries, though, everyone perks up. I announce that I will be heading to the promised land tomorrow: I tell them I'd bet a friend I could consume no less than four pounds of the delicious dish.

"You gotta order the special deal — you can't just order a Big Mac," Josh suggests helpfully, setting aside our impending blood feud for the sake of sharing his expertise. "You gotta order the specialty burger in order to get the unlimited fries. We found that out the hard way." Josh and Calen, it turns out, have already made the trek themselves. Naturally. Because we are all one when it comes to McDonald's fries.

"There's four pounds of grease in one fucking serving," Rodney offers. "And we're not even really sure if they're real fries or not." After some discussion, we collectively come to the conclusion that they are likely 10 percent potato, 90 percent petroleum byproduct. But damned if they don't taste good.

"The hospital is clear on the opposite side of town from McDonald's," Calen warns.

"Yeah, if you go into cardiac arrest, you might as well give it up," Josh laughs.

At this point, the jukebox starts playing Paula Abdul's 1989 single "Opposites Attract" — a song about two people who couldn't be more different finding common ground enough to live and love together. Maybe a shared love of french fries is all it takes to find unity in a divided America. Maybe things would be OK after all.