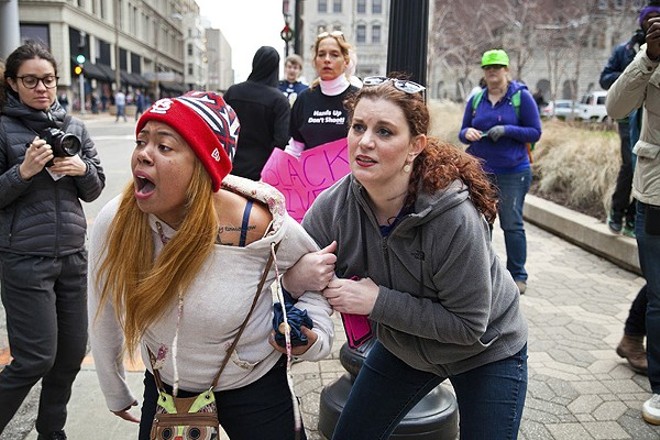 LUCAS ALVARADO FARRAR​/SUNDANCE INSTITUTE
The Ferguson protests are depicted vividly in the film.
Just a few weeks after its premiere at the Sundance Film Festival, the Ferguson documentary Whose Streets? is already looking forward to much bigger audiences — with a new distribution deal announced this morning.

The film, which was co-directed by St. Louis artist Damon Davis, has now been acquired by Magnolia Pictures. The company plans for a theatrical release in the summer, to coincide with the third anniversary of Brown's death, according to Variety.

Magnolia is known for its backing of the hugely influential documentary Blackfish, as well as Jiro Dreams of Sushi and Page One: Inside the New York Times.

Variety reports that Magnolia President Eamonn Bowles called Whose Streets? both a “critically important statement for these times” and “an indelible work of art.”

Featured in the RFT's January 18 issue, Whose Streets? is the first film for Davis, an acclaimed artist who also led the charge against the Contemporary Art Museum's Kelley Walker exhibit.

Davis, who is also known for his activism, was adamant that the film's director, Sabaah Folayan, work with someone local to tell the Ferguson story. That ultimately led to their collaboration — and, now, a film coming soon to a theater near you.