Josh Hawley Is Earning National Attention for All the Wrong Reasons 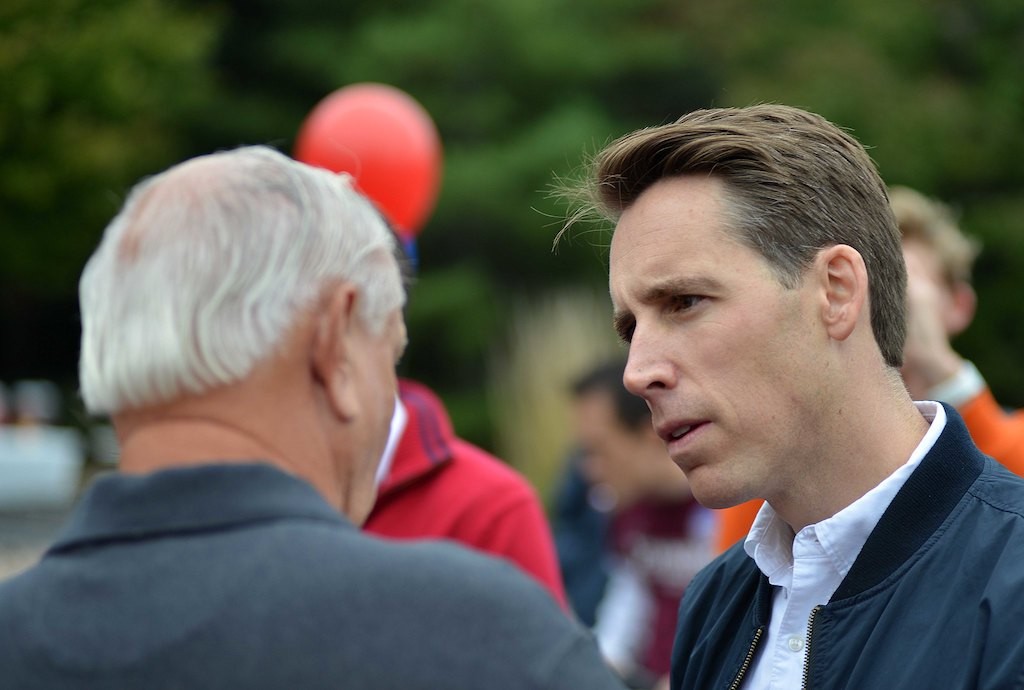 Senator Josh Hawley is making quite a name for himself.

Missouri's junior senator has gotten national attention for crusading against social media giants. Hawley has called them out for selling a "digital drug."

"The addiction is the point," Hawley warns. "Addiction is what Mark Zuckerberg is selling." He also blames the companies for suicides and loneliness and despair, adding, "They've given us an addiction economy."

And with a narrative reminiscent of those who argued television and rock & roll and video games were "ruining our children," he claims, "Maybe social media's innovations do our country more harm than good. Maybe social media is best understood as a parasite on productive investment, on meaningful relationships, on a healthy society. Maybe we'd be better off if Facebook disappeared."

Presumably, Hawley's brave rhetoric has provided quite a fix for the more than 125,000 followers on his three Facebook pages (including more than 9,100 drugged enough to "like" them). Hawley also provides digital opiates for the 55,000 addicts following his Twitter account, including me. Somehow, I cannot prevent myself from visiting his page with increasing frequency.

But what Hawley has conveniently overlooked is the fact that the digital age has permanently changed the world in a billion ways that won't be reversed no matter how hard he fights to bring back the Studebaker. Yes, there are serious privacy concerns and a serious need for some new guardrails. Neither will be advanced an inch by insulting rhetoric from a cynical hypocrite who got college degrees from Stanford and Yale universities and now proclaims all goodness in the world resides on the back porches of the rural Midwest, each flying an American flag anchored by an apple pie.

"As far as moral panics go, Sen. Hawley's will go down as one for the ages," Thierer writes. "Politicians have always castigated new technologies, media platforms, and content for supposedly corrupting the youth of their generation. But Sen. Hawley's inflammatory rhetoric and proposals are something we haven't seen in quite some time."

And they are not even the latest example of how Missouri's mistake is sliming the national political landscape. Last week, Hawley was credited with derailing the nomination of Michael Bogren to a federal judgeship.

Hawley successfully advanced an argument you don't hear every day from a former law professor: that Bogren should be disqualified by arguments he made in court while representing of the city of East Lansing, Michigan. The city had banned a couple from participating in its farmers' market after they refused to allow their orchard to be rented for same-sex weddings.

Bogren had argued that "the First Amendment does not create an exception to anti-discrimination laws based on religious beliefs, whatever those beliefs might be," reported the Detroit News. When he cited as an analogy that a KKK member couldn't hide behind the First Amendment to deny service to an interracial couple, Hawley pounced.

Hawley argued that Bogren didn't merely defend his client, but "denigrated" the orchard owners' Catholic faith: "To say that this family following the teachings of their church and the Scripture, that there's 'no distinction' — that was his phrase — between them and the KKK, that I think is really beyond the pale."

Ed Whelan, a conservative legal scholar writing for the National Review, argued that Bogren — respected on both sides of the aisle — was doing his job as a lawyer, adding that it's wrong to hold him personally responsible for his legal advocacy.

"Do conservatives really want to embrace the general proposition that arguments that a lawyer makes on behalf of a client should, without more, be held against the lawyer?" Whelan asks. "That's a proposition that, apart from being unsound, could redound to the detriment of conservative nominees who have defended religious liberty or pro-life legislation in unpopular contexts." The conservative Wall Street Journal editorial board criticized Hawley three times in three months, arguing he set a "precedent conservatives will regret."

Still, to me, the most compelling piece of the saga of the new, D.C.-based Hawley flowered from his impassioned maiden speech on the floor of the U.S. Senate in mid-May. It didn't garner as much coverage as blocking Trump's nomination of a judge to a key post, but it didn't go unappreciated.

In fact, Sparky1812 liked it so much that he called it "a great speech all around" and posted it on one of his favorite websites, one for which he is listed as a "sustaining member." That would be stormfront.org, a self-described "white nationalist community." Or, if you prefer Wikipedia, "a white nationalist, white supremacist, antisemitic, Holocaust denial, neo-Nazi Internet forum, and the Web's first major racial hate site."

Sparky1812 bestowed his highest honor upon Hawley: posting his words right under a speech given by Adolf Hitler. Under the headline "Senator Josh Hawley delivers a great speech," Sparky quoted Hawley — "they live in the United States, but they consider themselves citizens of the world" — and added, "Very close to what Hitler said ... it gets most interesting around 10:00."

For the record, Hawley didn't say a word about Jews. But here's what he said, right around the ten-minute mark:

"Too many Americans are losing their standing as citizens. They are losing their voice in the life of this nation. And with that they are losing their liberty. ... Today's society benefits those who have shaped it, and it has been shaped not by working men and women but by the new aristocratic elite, big banks, big tech, big multinational corporations, along with their allies in the academy and the media. These are the aristocrats of our age. They live in the United States, but they consider themselves citizens of the world. They operate businesses or run universities here, but their primary loyalty is to their own agenda for a more unified, progressive and profitable global order."

I wouldn't compare Hawley to Hitler. But Sparky did, apparently inspired by what he saw as similarities between Hawley's speech and Hitler's reference to "a small rootless international clique" in the video he posted online, right above Hawley's remarks.

Hawley is also popular with a guy named Hunter Wallace.

"WOW ... that was a great speech," Wallace wrote at the alt-right site Occidental Dissent. "I'm going to have to start paying closer attention to Sen. Josh Hawley. If he starts voting and leading and walking the walk like he talks in this speech, he could invert the 'conservative-populist coalition' and become a contender by the time of the 2024 presidential election."

According to the Southern Poverty Law Center, Wallace is actually an alt-right white nationalist who, under his previous identity of Brad Green, proclaimed, "Personally, I want to create a Jew-free, White ethnostate in North America. That's why I call myself a White Nationalist."

Welcome to the national stage, Josh Hawley. It may feel a little new, like some parasitic technology, but I doubt that will cause you the loneliness that social media inflict upon our children.

In fact, it looks like you've got a lot of friends out there already.