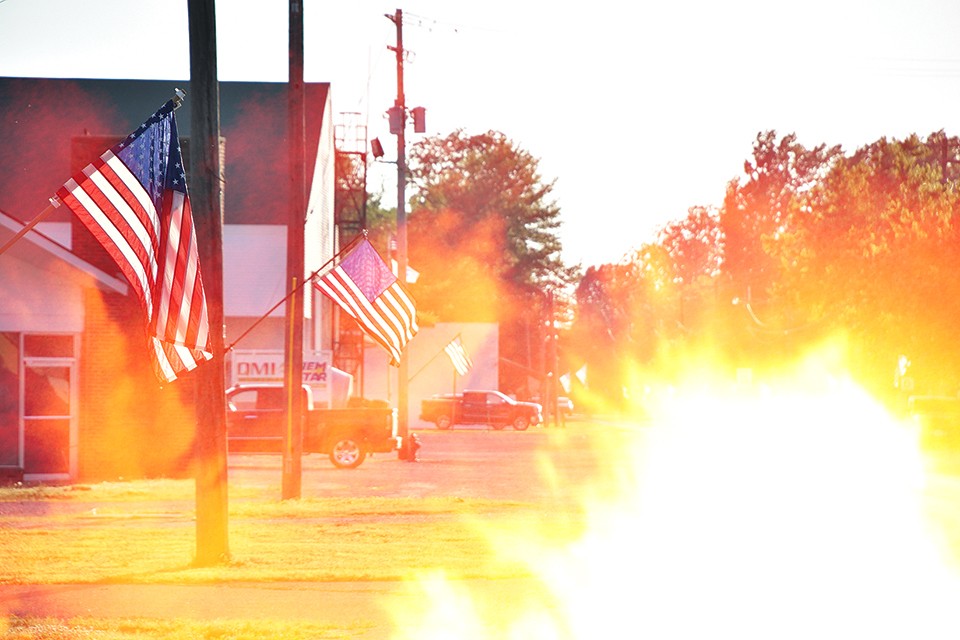 After midnight on April 17, an old two-story house in the southeast Missouri town of Parma burned to a pile of ash and twisted metal siding.

The house was one of the largest in Parma, a Bootheel town of 700 people (and falling) about two and a half hours south of St. Louis down I-55. It was best known as the home of former mayor Tyus Byrd, whose four-year term in office had ended just hours before. The city's first black mayor had attended a tense meeting that night, eventually relinquishing power to an 83-year-old political newcomer whose electoral bid was supported by her biggest critics. The new mayor, Rufus Williamson Jr., says the two sides were so divided that Byrd's administration refused to give him the keys to City Hall. "Couldn't find them," Williamson says incredulously. "That's what they said."

The newly ousted mayor, Byrd, had been at odds with her critics since even before taking office. In 2015, when she was the newcomer preparing for her own swearing in, she learned from a television reporter that six of the city's eleven employees had resigned rather than work for her. The dustup made the national news, largely because Byrd is black and all the exiting staffers, including the police chief and officers, were white.

"Black Mayor Is Voted in and a Small Town's Staff Empties Out," read the headline in the New York Times.

In comparison to that, April's changing of the guard initially seemed fairly tame. There were some terse words and lightly restrained animosity, but Williamson (who is also black) was successfully sworn in. The meeting adjourned. And then, a few hours later, the fires began.

The first emergency dispatch was at 12:40 a.m. Byrd's neighbors had noticed the orange glow of flames that morning and called 911. Parma had a fire truck just down the road, but it was out of service. Whether the town had a functioning fire department at all remains a matter of debate. Parma had leaned in recent years on the volunteer departments of the neighboring towns.

"The last couple of years, sometimes a fire breaks out and there aren't resources to fight it," says New Madrid County Sheriff Terry Stevens, whose deputies have helped patrol Parma. "It just burns."

Firefighters driving in from Lilbourn (twelve miles to the east) and Malden (thirteen miles to the west) arrived to find the fire in a full rage.

Byrd was not there at the time, but a neighbor told a TV reporter from Cape Girardeau that the 44-year-old seemed devastated when she eventually showed up. Alderman Simon Wofford, Byrd's father, says she was taking a shower at his house early that morning when they got the news about the fire.

"She just started screaming," Wofford told KVFS 12. "I guess she got a phone call. Started screaming, and I didn't know what was going on. She said, 'My house! My house!'"

The old house turned from white to gray to nothing in less than three hours. The roof came down, as did the second floor and all the wooden framing. Only a pair of metal trellises, holding up the front end of a collapsed balcony, remained standing by the end.

There was only a pile of smoldering rubble when Lilbourn and Malden packed up and left. Dispatch records show them clearing the scene at 3:05 a.m. One minute later, Lilbourn was back on the radio, calling in a second fire.

Smoke was coming from City Hall.

The Friday before Memorial Day weekend, Parma's normally barren main street is livened with a couple of dozen American flags.

When national reporters visited in 2015, they described a town in decline. Only a handful of businesses remained, and a once-bustling downtown had deteriorated into permanently closed shops and empty buildings. Parma was "withering away," the Washington Post wrote in its dispatch on Byrd's tumultuous election. The New York Times reported, "Parma's main strip looks like a bombed-out Wild West town ..."

A little hyperbolic, maybe, but Parma is even worse off now than it was four years ago. Several of the vacant buildings that were standing have collapsed. A sign taped to the post office door announces the latest boil order for water is in effect "until further notice."

"We went way down, and we're struggling, and everybody knows it," Mayor Williamson says.

The city lost its high school to consolidation in 1980, and automation of agricultural industry has all but replaced the farmhand jobs that used to sustain families here. Young people moved away. Businesses closed.

None of this is unique, of course. The hollowing out of the Bootheel is an American story. The elements of lost jobs and disintegrating community are achingly familiar whether you used to assemble Cadillacs in Detroit, process Kodak film in an upstate New York warehouse or mine coal in West Virginia.

But Parma has been hit especially hard. Residents wish for the barest of amenities — a Dollar General store, clean tap water or one of the three deserted filling stations to reopen so they can buy gas in town.

On a recent visit, a man in a wheelchair rides down the center of the main road. Passable sidewalks are a rarity in town; so is traffic. "When I grew up here in the 1970s, you couldn't have asked for a better place to live," the man says. "Now, it's full of snitches and drug dealers."

His girlfriend drives past on a riding lawnmower and shoots him a look without stopping. "I'm still proud to say I'm from Parma," he continues. "But I can't wait to leave."

As soon as he moves on down the road, a white pickup that's been idling nearby pulls up. The driver rolls down his window and chats for a moment before nodding toward the departing man in his wheelchair. "That guy's the biggest pedophile in town," he says, launching into a story. For what it's worth, the man in the wheelchair is on the sex offender registry, although whether he's the biggest pedophile in Parma is probably subjective.

When the media came calling in 2015, the city was not at its best, and it is still hoping to regain its footing. The stories that followed Byrd's election and the flight of city workers before her tenure even began painted the fracas as a sign of racial tension among a small town that was two-thirds white and one-third black. But Byrd and the ex-employees alike bristled at that framing. "They made it about race, and it's not about race," the mayor told the Washington Post.

It was, instead, about policing. (And then also kind of about race.)

Residents complained that the police department (a chief, one full-time officer and a couple of part-timers) cracked down on traffic infractions and nitpicked code violations. "They will literally be out in the morning with a measuring tape, measuring your grass," Terrell Thatch, a cousin of Byrd's, told the St. Louis Post-Dispatch. Meanwhile, larger crimes such as burglaries, violence and everything else tied to a blossoming drug trade went largely unsolved, critics said.

Then, about a month before the election, a seventeen-year-old cousin of Byrd was tased by an officer investigating prank calls to the police station. Police claimed the officer's actions were justified. But a group of black residents went to the police station to complain.

"I think the black population saw they had an opportunity to elect a black mayor, and I think nearly all of them voted for her even though I have a good relationship with the blacks," Ramsey told the Washington Post. "But I think they were just hellbent on voting for a black."

Police Chief Trish Cohen, who quit after Byrd's election, told NBC News that she had run-ins with Byrd's relatives who then posted her address on social media. She worried the mayor wouldn't have her back.

"You can't have an anti-police mayor, and that's the way she made me feel," Cohen told the network.

Both Byrd and Cohen later stopped doing interviews, unhappy with the onslaught of coverage. The ordeal has similarly made the current leadership wary of how the recent fires will be viewed. Williamson says he has been asked repeatedly if Parma has a racial problem.