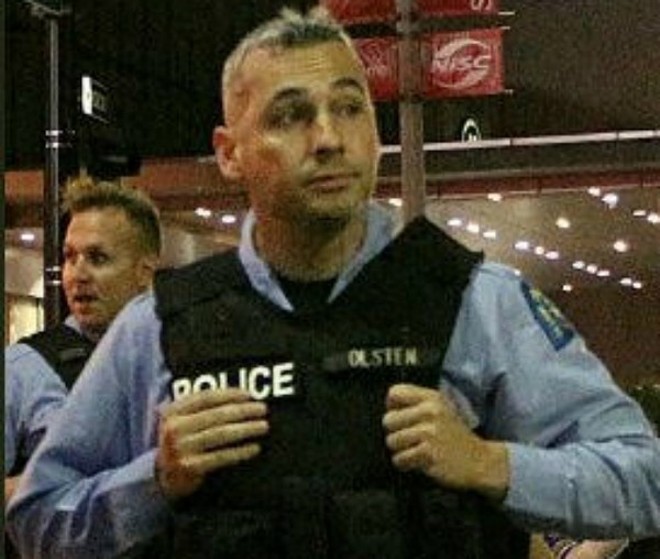 COURTESY HEATHER DE MIAN
William Olsten, a former St. Louis police officer who was charged in January with first-degree assault and armed criminal action for his part in a violent confrontation last year outside of Bomber O'Brien's, is now facing more felony criminal charges for a separate incident.

St. Louis prosecutors have charged Olsten with three felony counts of third-degree assault for pepper-spraying people during a police protest in September 2017 outside of Busch Stadium.

Once a member of the police department's special operations unit, Olsten was among officers assigned that night to monitor the protests that followed the acquittal of ex-St. Louis cop Jason Stockley in the 2011 killing of Anthony Lamar Smith.

According to charging documents, Olsten unloaded on the three even though "no clear warning and/or orders to disperse were given." No attempt was subsequently made to arrest any of the three for any crime, the charges say.

The charges further allege that Olsten was visibly angry at Brandy and had to be held back by other officers before later blitzing the man with pepper spray.

De Mian uses a wheelchair and Aldridge has a prosthetic leg, which would give them the classification of "special victims" and potentially increase the penalties for Olsten, according to charging documents.

Javad Khazaeli, the attorney for one of the victims, tells the Post-Dispatch that video from the night proves that Olsten fired the pepper spray at the trio "to punish them for criticizing police actions."

A photo published by the St. Louis American shows Brandy walking away from Olsten while Olsten blasts him in the head with pepper spray. Video shot by De Mian shows the moment she was hit with pepper spray as well. Olsten can be seen holding the can. (The incident occurs near the 22 minute mark.)

"Olsten did that on his own," De Mian told RFT after the incident, noting that no one had given an order to spray them, "because he's a dick."

Olsten and the St. Louis Police Department at large are currently the subjects of federal civil suits based on their response to the protests following the acquittal of Stockley. A suit against Olsten alleges he challenged at least one protester to a fight, shouting, "Come and fuck me up then," before being restrained by other officers. Olsten, De Mian and Aldridge are three of the four bringing those suits, along with another St. Louis County resident.

Olsten is also currently facing unrelated charges of first-degree assault and armed criminal action for his part in an altercation that escalated to a shooting outside of Bomber O'Brien's in April 27. Those charges, filed in January, accuse Olsten of sliding open a door and entering a van owned and occupied by a person with whom he and other officers had had a disagreement inside the bar. Another officer, Joseph Schmitt, then crept along the side of the van with his gun drawn, the charges allege.

The victim grabbed his own gun and jumped out of the vehicle, whereupon Olsten allegedly grabbed him and slammed him to the pavement. In the scuffle, the victim's gun went off, striking Olsten in the hand and arm, prosecutors say. Schmitt then opened fire on the victim, charges claim, who was wounded but survived.