From Wayward Teen to Wine Pro, Zac Adcox Is Living His Passion at Indo 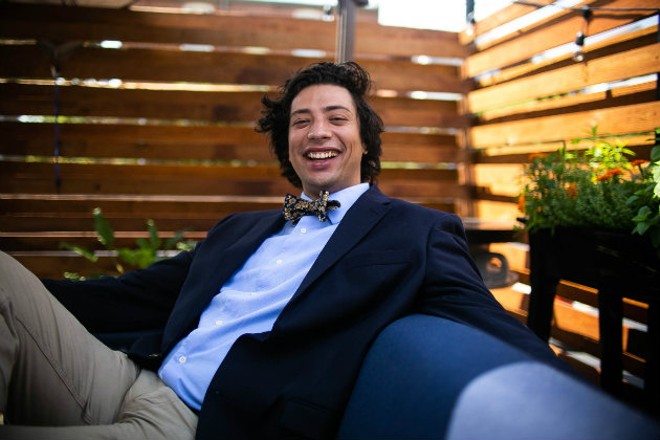 JEN WEST
Zac Adcox was on a search for his life's passion, and he found it in the restaurant business.

Zac Adcox makes no bones about the less-than-honorable way he came to his big break in the restaurant industry: He lied to get it.

"I got hired at this new French bistro because I lied and told the manager I was going to school for hospitality management," Adcox says. "The funny thing is, I loved the industry so much, I actually ended up doing it."

Now the co-manager and beverage director at Indo (1641D Tower Grove Avenue, 314-899-9333), Adcox has enough experience under his belt to get just about any restaurant job he'd want. However, it wasn't always that way. In fact, it wasn't that long ago that he was a struggling high school graduate trying to find his way in his native Arizona.

"I graduated from high school and didn't have a plan and was kind of fed up with Arizona in general," Adcox explains. "I was working at a revolving sushi restaurant and getting into trouble here and there — nothing crazy but enough to make me think. I think everyone has that syndrome when it comes to where you grow up. Eventually, you just want to get out."

Adcox decided to leave his hometown and move across the country to Baltimore to be with his dad and step-mom. He saw the move as a chance to start fresh and get some perspective, and he found just that when he noticed that a new restaurant was opening not far from where he was planning to attend community college in Columbia, Maryland. In need of a job, he applied, thinking it would be convenient to his school. What he didn't realize was that it would end up giving him the sense of purpose he'd been seeking.

"There was this manager who was this hard-ass, plate-throwing, old-school French-style guy who was so demanding, but he had this presence," Adcox recalls. "He just walked in and scared the shit out of everyone and was dressed to the nines. He just had this essence. I really liked him and the way he handled himself."

That scary manager would go on to become Adcox's first mentor, instilling in him a passion for service and a fierce commitment to doing things the right way. Adcox soaked up not just his teaching, but the restaurant business as a whole. He was particularly taken by wine and, even though he wasn't old enough to do tastings, he took it upon himself to do research and learn as much as he could outside of work.

His enthusiasm impressed his managers and one sommelier in particular, who took him under his wings and fostered his blossoming talent for wine. Before he knew it, Adcox was the restaurant's go-to person for wine and, even as a busser, was called to tables to help guests with their bottle selections.

When his mentors left the bistro to open their own restaurant, Adcox followed and threw himself even more into his wine education. That quest brought him to St. Louis to take a Court of Master Sommeliers exam. Not only did he pass the test, he got a job out of the trip as well.

"After the test, we went to Blood and Sand to eat, and T.J. [Vytlacil, its former bartender] completely dazzled us," Adcox says. "I ended up telling him I wanted to work there, and he asked me if I was serious about moving cross-country. I was like, "Yes, obviously."

Adcox packed up his life and moved to St. Louis to take a job as manager at Blood and Sand. He enjoyed getting to know his new city and, after about eight months in that position, decided it was time to move on to one of the area's other top restaurants. That decision put him at Reeds American Table, where he worked under now-master sommelier Andrey Ivanov. At first, Adcox was brought on as a weekend sommelier, but he eventually worked his way up to general manager, where he worked until the restaurant closed earlier this year.

In need of a new job, Adcox reached out to Nick Bognar, the rising star chef of Nippon Tei who was getting ready to open a new concept, Indo. The two instantly connected, and Bognar offered Adcox the opportunity to manage the hotly anticipated restaurant, as well as run its beverage program. It was an opportunity he couldn't refuse.

Now, less than two months into his new role, Adcox feels like he has found his groove at Indo and is enjoying working with Bognar and his co-manager, Mike Brown. For the first time in his career, he is working with people his age who have the same level of passion and seriousness regarding their career paths, while having fun in the process. He's also relishing his chance to pay his knowledge forward. Now that he is more established in his career, he's taking every opportunity to pass on what he's picked up along the way to anyone willing to learn.

"I teach the staff to be good people before all of the other stuff," Adcox explains. "We need to get something out of them, but they should get something out of us, too. If someone wants to do this industry thing, I want to teach them how to do it the right way, and that means teaching them to care about our guests and never take them for granted."

Adcox took a break from Indo to share his thoughts on the St. Louis restaurant community, his admiration for line cooks and why you should never pass him a piece of black licorice.

What is one thing people don’t know about you that you wish they did?
I wish I had kitchen experience. I admire cooks and their dedication to their craft. An "O.G." line cook is like meeting a master sommelier.

What daily ritual is non-negotiable for you?
Coffee. Shower.

If you could have any superpower, what would it be?
The ability to freeze time.

What is the most positive thing in food, wine or cocktails that you’ve noticed in St. Louis over the past year?
Smaller restaurants with more chef-centric and concept-driven food and beverage.

What is something missing in the local food, wine or cocktail scene that you’d like to see?
An awesome late-night industry bar with cheap, good fresh food.

Who is your St. Louis food crush?
Juliette Dottle [Elmwood].

Who’s the one person to watch right now in the St. Louis dining scene?
Chef Adam Alnether at Elmwood. I would say equally Adam Gnau of Acero. Both are humble, quiet restaurateurs that we could all learn something from. Also, they serve my favorite foods in the city.

Which ingredient is most representative of your personality?
Crispy garlic.

If you weren’t working in the restaurant business, what would you be doing?
Probably getting out of college trying to figure out what to do with my life.

Name an ingredient never allowed in your restaurant.
Anise.

What is your after-work hangout?
Crow's Nest.

What would be your last meal on earth?
A feast of classic french dishes with a bottle of white Burgundy.