STEPHEN KENNEDY
Sadhna Smantarai and Louie are among the dozens of visitors who use the park in Grand Center on any given day.

Jon Porter has adopted a boxer mix named Rusty. More of a sidekick, really, Rusty is his constant companion on the weekends, when the two spend time at a few of St. Louis' most popular dog parks, including the unique situation that's cropped up on the corner of Lindell and North Grand boulevards. There, a green space called the Ellen Clark Sculpture Park has been a presence for the better part of a decade. If intended to be the quiet showcase of a prolific artist priest with ties to Saint Louis University, it's instead become an oasis for area dog owners, who flock to the space on the weekends, creating kinships that extend beyond SLU's signature black fencing.

As Porter describes it, the space isn't like any other in St. Louis — and he's not just talking about dog parks. Instead, as he sees it, the area is one that people use for a few different reasons. Proximity is part of it, of course, given the location within an easy drive of north and south city, as well as Highway 40. It is also free, saving users $50 to $100 in annual membership fees charged at other dog parks. And maybe there's just something about the location that calls out to people, with a little bit of an urban oasis vibe at any given moment.

Let's travel back to the weekend of July 4 as example. With temperatures in the hot zone, a dozen or so dog owners gather in the northeast corner of the park. Blessed as it may be by large-scale sculpture, the tree cover is minimal, and on a sunny day, the few park benches and single picnic table fill up quickly as dog owners huddle underneath trees and along the back fence line. They catch up on the day's news, updates in their personal lives and other bits of fractured conversation to go with quick bursts of dog behavior correction. The remnants of an Independence Day parade slow-roll down Lindell, with tiny pirate ships and apples and rocket ships passing down the block.

That might be the kind of thing you only see occasionally, but other sights are more frequent. Porter promises a vision of real diversity. Nursing students from campus gather in the early mornings before classes. Nearby apartment dwellers head in at the same time, or after work and at lunch. Visitors from other parts of the city arrive, mostly, in the happy-hour zone, when as many as 50 dogs have been seen in the summer. A 70-degree day in October can send even that number north. The owners are black, white, young, old, serious dog people and those who just want to tire out their animal.

Dana Abell is part of a group of friends who coalesced here, a self-dubbed Dog Pack. As happens with groups of young professionals, members come and go. The dozen or so who made up the group two years ago have dwindled to about half, with folks moving to all parts of the country. Those who remain still hang out, invite a person or two into the fold.

"We've all made connections here and network about things that aren't related to dog parks," she offers. "We know about your martial arts," she says, pointing at Porter. "And you can talk about things dog-related, like good vets or places that offer doggie pool days."

As she says this, her friend Mariah Greer pops back over to the picnic table. With two small dogs and a naturally high motor, she's zipping through the park, keeping track of her dogs, who've both been known to slip the fence for quick runs into Grand Center. Hearing some of the talk of diversity, she jokes, "I wouldn't hang out with this many white people without this dog park."

"We're bridging communities," Porter says sincerely of the dog community, though SLU would necessarily get some of that shine, as well. Mind you, none of this was part of a plan. 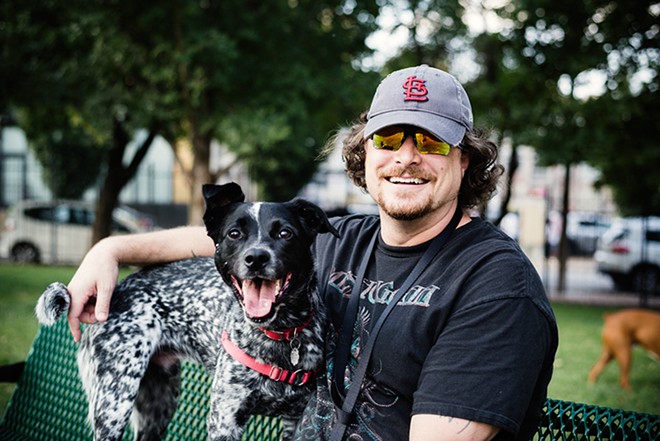 STEPHEN KENNEDY
Joshua Headley and Rocco take a break together.

Former Saint Louis University president Lawrence Biondi is generally lauded for the positive impact he made on the built environment of the school's midtown Frost Campus, but there's an undercurrent of criticism attached to that legacy. Specifically, that for all the positives, there was a needless, heedless use of the wrecking ball in his tenure, and that instead of mothballing structures for later use there was a preference for permanent green space, be that used for statuary, playing fields or fountains.

The footprint that contains the Ellen Clark Sculpture Park provides an example for those who are critical, in that a building with multiple commercial uses and a street-facing presence was taken down for the added green space that was a hallmark of SLU expansion in the 1990s and 2000s. If cities are built by intersecting grids of streetside buildings, this corner is one more glitch in the matrix.

SLU's communications department notes, "SLU purchased the Marina Building, which was on the [northeast] corner of Lindell and Grand, in 2001. At the time, the building's occupants were the Golden Dynasty Restaurant, an optometrist, uniform company, beauty college and bar. After the building was removed, open space was created in 2011, which was imaginatively turned into a dog park and sculpture garden. Form meets function."

Construction began in 2010, with a blog/blogger named stlexplorer noting that a de facto dog park had already started to coalesce. On December 15 of that year, stlexplorer noted, "This lot has been informally used as a dog park for several years and I am glad to see it made into a more attractive place. Although I am disappointed to see a permanent use for the land that doesn't add to the density of the neighborhood, the fact that something is happening is a relief."

The construction there was about a decade in the making. Saint Louis University's campus newspaper, The University News, noted on July 11, 2001, that "this summer SLU purchased the Marina building at the corner of Grand Boulevard and Lindell Boulevard and the adjacent Feathers building at 3557 Lindell. While the Marina building was nearly vacant, the Feathers building is home to Vito's Pizza and 17 apartments. These property acquisitions come after the purchase of a vacant Jack in the Box at the corner of Grand and Olive Street, giving SLU control over the block at the entrance to Grand Center."

Kathleen Brady, cited as the vice president for facilities management and civic affairs at SLU, was quoted as saying the purchase of the Marina and the neighboring Feathers Building was possibly part of a more urbanistic future for the northeast corner of Lindell and Grand.

Brady, in the piece, added that SLU's goal, along with that of Grand Center, was to develop the property for a variety of uses, such as retail, restaurants, housing and possibly commercial office space. "This will benefit the University by bringing life and vitality to that corner of campus and providing more retail, restaurant and housing opportunities for students, faculty and staff," Brady explained. "By investing and improving the Grand Center area, the entire University community benefits from increased housing, retail and dining opportunities and from the stabilization of that area.'"

It was a good goal. But it changed.