David and Kara Bailey's latest concept is about to bring a new punch of flavor to South Grand. Knockout BBQ (3150 South Grand Avenue) debuts today in a shared space with Rooster, one of the couple's six St. Louis restaurant concepts.

The menu draws from a range of regional barbecue traditions, including sauces such as South Carolina mustard and Alabama white. Kansas City and St. Louis are also represented, of course, with a thicker, sweet and tangy sauce and another sweetened with Dr. Pepper, respectively. Reached by phone today, David Bailey says that he and his team experimented with close to fifteen sauces before landing on the final lineup of six.

"We wanted different regional sauces that are distinct from one another; we like having those options for people," Bailey says. "St. Louis barbecue sauces are thicker, pretty sweet and definitely tomato-based with not much smoke or vinegar flavor. We wanted a version of that sauce, and we had made another one with Dr. Pepper that we cut, so we migrated that to be our St. Louis sauce. We were gonna use a cola of some kind, but Dr. Pepper, with its particular flavors, worked really well."

Which sauce you choose, of course, likely depends on what protein you order. The smoked chicken wings, for example, from the Things to Share section of the menu, are served with that tangy Alabama white sauce, which complements the smokiness of meat. Other favorites from the shareable menu include the Texas Twinkie, a bacon-wrapped poblano filled with brisket and cream cheese and the cornmeal-breaded fried green tomatoes with bacon ranch.

Meanwhile, the loaded pulled pork sandwich gets a kick from the fiery Texas sauce. Living up to its name, the sandwich balances that spice with a mélange of other ingredients, including chicharrones, sweet pickles and queso. It's one of six signature sandwiches served at Knockout, including a Cuban, brisket Philly and smashed burger. If you want a less stacked sammie, Knockout also serves plain pulled pork and chicken; turkey and jackfruit; and brisket options. Yes, you read that correctly: Knockout serves a vegan-friendly jackfruit sandwich, as well as a current smoked jackfruit plate special served with sweet potato and hominy succotash.

"We wanted to have fun and do variations on the different meats we have," Bailey says of the signature sandwiches. "You've got chicken, pork, turkey and brisket all represented in those sandwiches and done in a more composed dish way. We'll play around with those and change them over time. Barbecue is universal across the country and around the world, but the styles vary dramatically, and we wanted to represent that."

Of course, as at most barbecue joints, the real joys at Knockout are the combos and plates. Combos come with your choice of two, three or four meats, including pulled pork, pulled chicken, turkey and brisket. Ribs can be substituted for one meat for an additional charge. Plates offer either pork steak or a half chicken (or both if you have a truly large appetite). Both the combos and plates are served with slaw, bread, pickles and your choice of two sides.

For Bailey, a St. Louis native, having the pork steak be a signature menu item at Knockout was especially exciting.

"It's sentimental for me; I grew up in St. Louis eating pork steaks," Bailey says.
"I didn't realize that it wasn't a thing all over the country until I was much older. We always want to nod to St. Louis [at our restaurants], and I love pork steaks; we've had them on other menus, and this is a perfect opportunity for that. We also wanted it to be a really good pork steak, so it's a one-inch thick pork steak before we put it in the smoker, and it's super tender — you can eat it with a fork and no knife."

Portions here are big, so plan to box up some leftovers so you have room for dessert — after all, you're at one of Dave Bailey's spots. Choose from three current offerings: jalapeño-blueberry cornbread, gooey butter cake or Ko Kobbler, with blackberries, blueberries and a lemony biscuit crust.

In addition to the eats on offer, Knockout serves a full bar. The highlight here are the seven house cocktails. On our visit, we loved (maybe a little too much) the Whiskey Before Breakfast, with bonded bourbon, a smoked sugar cube and rib rub bitters. A thoughtful addition to the menu are three nonalcoholic cocktails, such as the Bonfire S'more, with hot chocolate, smoke, cinnamon, marshmallows and graham cracker. The bar program was overseen by Justin Austermann, executive director of operations for Baileys' Restaurants.

"Justin came up with all the drinks, and the conversations we had were about taking inspiration from certain items on the menu and making the drinks a perfect counterpoint for the barbecue — boozy, outdoorsy, having a fun night with friends," Bailey says. "The Lucky Strike [cocktail] is like a Paloma, but with smokiness and spice. We were thinking about things that will enhance the experience and fun factor of the barbecue."


And if you still have room after barbecue, Knockout offers two boozy shakes: one flavored like sweet potato pie with spiced rum and whiskey and another modeled after Key lime pie with white and dark rum. The drink list also features several wines and ten local craft beers and ciders on tap, including pours from Urban Chestnut Brewing Company, 4 Hands Brewing Company and Civil Life Brewing Company.

For Bailey, the opening realizes a longtime dream of running a barbecue restaurant — and even though Knockout's first location is on South Grand, Bailey hopes it won't be its last.

"It's great — I don't want this to be the only Knockout we open, and we still have plans for downtown, but it's satisfying and exciting to actually be a place where people can come and enjoy themselves finally," Bailey adds. 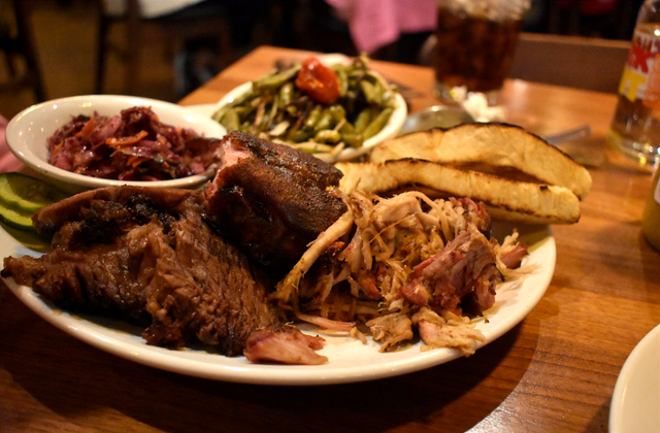 Liz Miller
A combo plate with pulled pork, brisket and ribs with tangy slaw and roasted green beans with tomatoes.