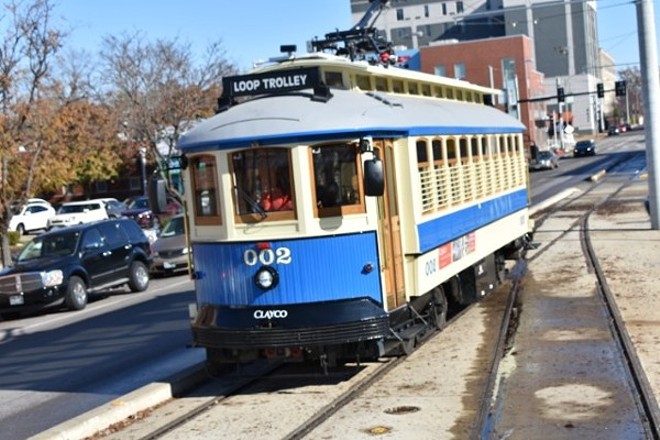 DANIEL HILL
Booze goes well with most things, and would certainly mark an improvement for the Loop Trolley.
By now, it’s become abundantly clear that the ongoing nightmare of poor planning and budgetary wishful thinking more commonly known as the Loop Trolley is an embarrassing boondoggle of Simpsons-Monorail-episode proportions. Had you any doubt before, you eternal optimist, the Trolley Co’s recent admission that they’ll have to close up shop by November 15 if the county doesn’t chuck $200,000 dollars now (followed by $500,000 for 2020) into the swirling abyss that is their coffers surely sealed the deal.

Here at the RFT, we are remiss to say we told you so. And while it’s true we’ve had some fun at the trolley’s expense from time to time, our sentiment is the same as the one shared in a rousing call to arms included in the Trolley Co’s recent statement on the matter: “It is here.”

All parties involved would prefer not to see yet more businesses close in the Loop as construction crews tear up the street to rip the tracks out of the ground. County Executive Sam Page says that a failure this early could affect the St. Louis area’s ability to attract federal money for future transportation projects. In short, it’d be far better for the damn cursed thing to keep on chugging along and clipping the mirror of the occasional car than it would be to throw in the towel at this point.

That means the trolley needs to start generating money. And since nobody seems to want to pay to ride on it — fare revenue is nearly $400,000 below original estimates — we’re gonna have to think outside of the box.

We’ve shared some thoughts on ways the trolley could make some money before. (Mounting a stripper pole in it is still probably the most effective scheme, but considering the way the prudes in U-City ran Social House out of town it seems unlikely to be implemented.)

But there was one idea within our snark that we truly believe has some legs: Why not serve booze on the trolley?

St. Louis is a drinking town with a trolley problem, and as with many problems, the surest path to a solution is more drinking. When faced with the prospect of shuffling down Delmar at 22 mph with a stiff cocktail in hand or without, which would you choose? And considering the dearth of passengers, there’s plenty of room in the cars for a small bar and a dedicated bartender.

The idea is not entirely without precedent. In New Orleans, a rare town that is even boozier than our own, you can hop aboard their trolleys with a drink in your hand, no questions asked. Why not one up our friends to the south with a trolley that doles out the goods itself?

Heading east to the History Museum? Nothing loosens you up for an afternoon of learning like a nice martini. Westbound to the Loop? A couple of Moscow mules will handily set the tone for a breezy day of shopping.

Sure, there would be bureaucratic hurdles. The trolley line sits in two cities, and they’d have to coordinate as far as liquor licensing and such is concerned. (Not to mention the fact that it’s mobile, which surely brings its own headaches.) There would be a lot of red tape to cut through, we’ll grant that.

But considering the copious amount of red tape that’s already been shredded in order to foist this nuisance on us in the first place, isn’t it at least worth a shot?