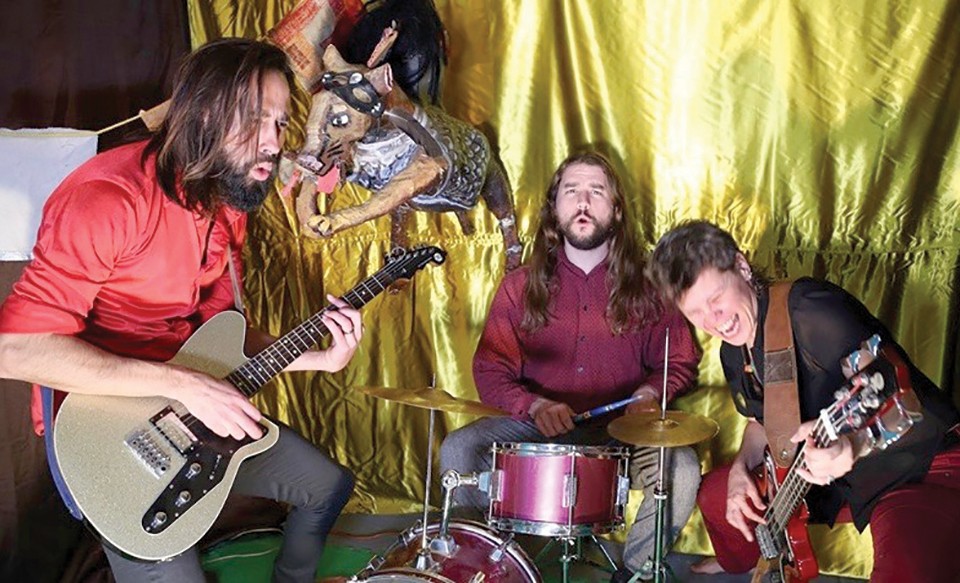 VIA THE ARTIST
Fire Dog didn't initially start out as a children's band, but it turns out the kids love them.

Mark Pagano has been leading the poppy rock & roll trio Fire Dog for well over a decade at this point. Along with bassist Celia Shacklett and drummer Mike Schurk, Pagano makes funny, sometimes absurd, always upbeat songs that are devoid of ego and irony and heavy on charm and warmth. And it seems the longer the band stays around, the younger its audience gets.

"We kind of got together in 2006, and the focus was around the songs I was writing at that time," Pagano says. "Those weren't geared toward family audiences." As time went on, the trio's peppy and open-hearted songs, which are built around sing-along-able harmonies, began to appeal to a broader audience.

"There were certain songs of Fire Dog's that were popular that kids liked, and people would ask us if we would do a kid's album," Pagano explains. The idea percolated until 2014, when Pagano and his wife welcomed their first child. From there, his songwriting turned toward younger listeners — his children, of course, but other people's kids as well.

It's Fire Dog!, the trio's latest, comes on the heels of last year's Endangered Species Project, which featured songs about animals whose habitats and livelihoods were threatened. That record featured "Hellbender," which has become the trio's signature song and an anthem for the revival of an evocatively named salamander native to Missouri.

It's Fire Dog! has no such framework to it, but Pagano sees the album as part of the band's kid-friendly progression. "I consider the new album the third in that trilogy. The last three albums have been in that focus," he says. "It's been a good niche for us; we play at diverse venues like libraries and schools and community events."

Pagano calls the move toward family friendly music "a natural progression," and even the earliest Fire Dog songs had a child-like sense of wonder and an effusive positivity, even if the band was more likely to be gigging at rock venues than libraries. The band still plays at more adult-oriented venues; it graces the mosaic-tile stage at the Venice Cafe a few times a year, and that bar's eclectic decor and come-as-you-are aesthetic fits Fire Dog's winsome attitude.

"A lot of the songs we do out at bars is the same material, and it's accessible to kids and adults of all ages," Pagano says. "The rhythms are real danceable and the harmonies are singable. There's an accessibility that makes it fun."

Now a father of two, Pagano uses parenthood as fodder for songcraft. Not surprisingly, his sons end up both as muses and co-conspirators in his songs.

"We're playing music all the time," Pagano says. "My older son got into drums at about two years old and we still play a lot together. I'm also an educator, so I use music a lot with my young ones in our day-to-day interactions."

Part of Pagano's day job is to host songwriting workshops at local grade schools, and he often ends up writing collaboratively with his young charges. "Narwhal," from the new album, was one such co-write, and it sprang from a residency with a fourth-grade class at Kehrs Mill Elementary. As an added bonus, the students will learn precisely how hard it is to make a living as a working musician.

"It is registered with ASCAP and it is a co-written effort, so assuming that money rolls in, they'll get half," he says with a laugh.

Pagano says that "Narwhal," written about the tusk-endowed whale, has already become a favorite of his young listeners. "It's a really popular animal right now; it's kind of a magical creature, so there are kids telling me stories on how they evolved from unicorns. It's interesting to play these songs for kids and see what they have to offer."

Likewise, the opening and closing songs are the twin title tracks to It's Fire Dog!. Pagano says the tune was born out of necessity: The group needed a theme song to introduce the band, and some interactive dog-barking was a good way to ramp up engagement.

Pagano says that while this is Fire Dog's second record in as many years, he isn't sure how many more full-length records he envisions. His bandmates keep active with other gigs — Shacklett is perhaps the best-known children's performer in town, and Schurk plays regularly with Beth Bombara and others — so practice and songwriting sessions are few and far between.

"It's hard to say the direction or arc of the band," Pagano says. "We're all busier than we have been in the past, so it's hard to find time to rehearse. It was a bit of a difficult decision to release songs on the album format. I've been getting into some home recording and moving toward singles and self recording things. It's just a lot of work to rehearse the live band and get into the studio. It slows the process down; we could continue to be productive and produce things that way."