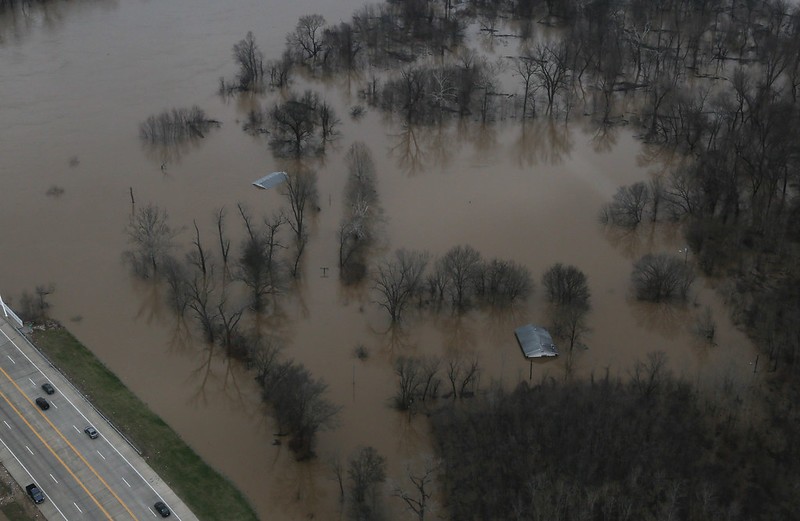 Where's Stan Kroenke when you need him?

In June 2016, our own Lord Voldemort showed up in the news as one of the nice people seeking taxpayer benefits to help him reap untold millions developing 1,800 acres in Maryland Heights near the intersection of Highway 141 and the Page Avenue Extension. Although Kroenke was just one of six such applicants, his desire to receive local corporate welfare went over in St. Louis like a hijab at a Trump rally.

Less than five months later, Kroenke pulled out, not because of public outrage, but because, according to KMOV reporting at the time, Maryland Heights had "elected not to go forward with any of the plans, saying none of them met criteria set by officials." This explanation was what we call "spin," shorthand for "not even close to being true."

Later, those officials would own up at public hearings to the fact that the city had pulled back because of damaging flooding in 2016, not some inexplicable failure by slick developers like Kroenke to comply with their criteria. But don't mistake that rare candor for a "mea culpa." It was not.

Just three years later, a somewhat larger version of the assault on the environment is moving forward. It's apparently 2,400 acres, not 1,800. The largesse is presented as public infrastructure, not welfare, but the purpose is unchanged: To monetize some of the last agricultural land in St. Louis County and, in the process, prioritize economic riches over responsible stewardship of the environment.

Tonight, December 18, a Maryland Heights TIF commission — with county government participation — will hold a public hearing to explain why taxpayers should indirectly fund a $151 million subsidy for some ginormous development down the road in the Maryland Park Lake District. This one won't have a face of evil like Kroenke's to rouse public unrest. It won't appear to be lining developers' pockets, even though it ultimately would, arguably in greater sums than the previous deal.

But even setting that aside, the ecological irresponsibility is the worst of this: It's a terrible idea for our region, no matter how many new shades of lipstick they place on this latest environment-ravaging pig. In the best case, Maryland Heights would be solving its own ongoing flooding issues by literally sending the waters downstream to flood someone else.

In some rather bitter irony, some of those future flood victims might be other St. Louis County residents who would be subsidizing the new economic development in Maryland Heights to no benefit for their own communities (and maybe even some detriment through lost commerce to Maryland Heights).

Lessons have not been learned here in a region where "500-year" floodplains would more accurately be described as "500-day" floodplains. Politicians and their expert planners will rationalize eloquently — in the name of flood management — still another "economic development," corporate-welfare scheme that ultimately will treat Mother Nature as some homeless lady.

To be sure, this is a complex subject. It isn't unreasonable that officials in cities like Maryland Heights want to develop new revenue sources, and as long as they're in competition with countless other jurisdictions that are throwing public funny money at quasi-capitalists, you can't blame them for joining the party.

But not when it comes to subsidizing ecosystem damaging developments in floodplains. Now, because we city folk don't traffic all that much on this topic, I direct you to www.prairierivers.org, the website of the Champaign, Illinois-based Prairie Rivers Network: "Floodplains are the low-lying areas adjacent to rivers that are formed by sediment deposited by rivers and subject to flooding. The floodplain is an integral part of a river and is essential for a healthy functioning river system. Floodplains provide a variety of benefits for people, fish and wildlife."

The site goes on to explain how floodplains provide productive habitats for fish, plants and wildlife, including migratory birds, and how they can promote clean water, flood protection for surrounding areas, fertile soil for farmers and recreation activities such as fishing, hiking and wildlife viewing. My main takeaway: They're not just some nuisance where floods happen, which is how they are too often viewed.

Some of this came through in a not-so-great-for-us Washington Post story on July 13 headlined "Even as floods worsen, Midwest towns plan new riverfront development." As if St. Louis needed more fine national coverage, our region received a brief-but-starring role in the environmental equivalent of Dumb and Dumber.

Consider this passage from the Post story: "This year's historic floods throughout the Midwest caused billions of dollars in damages; washed out highways, bridges and dozens of levees; swamped crop lands and cities; sent residents fleeing for their lives; and left a death toll in several states.

"Decades of development have contributed to the problem. Claims to FEMA's flood insurance program have increased rapidly in the past two decades and spread beyond coastal regions. Here in metropolitan St Louis, floods in 2013, 2016 and 2017 are among the city's highest 10 crests, according to National Weather Service records.

"Regulation of floodplain building is a state-by-state patchwork, where Missouri is 'the Wild West,' according to Olivia Dorothy of the environmental nonprofit American Rivers."

At least we had some smart local people speaking up for us in the story.

"It's lunacy," said David Stokes, executive director of the Great Rivers Habitat Alliance. "They're continuing to build in places where Mother Nature intended water to go. And there's no end to it."

And there was this, from Robert E. Criss, professor emeritus with the Department of Earth and Planetary Sciences at Washington University: "The major cause of record, recent flooding is entirely man-made — the dramatic constriction of our large rivers by oversized levees, floodplain development and structural narrowing for barge traffic."

The story did note that state Sen. Andrew Koenig (R-Manchester) introduced legislation last session that would have banned local tax breaks for new developments in floodplains. It didn't pass, but to his credit, he says he'll try again.

I have no reason to question the good intentions of the folks in Maryland Heights. Stokes, a bona fide expert on this subject, tells me there are legitimate concerns for some pumping stations and other flood control measures on behalf of some landowners, including Creve Coeur Airport, some farmers and small businesses operating recreational facilities. And Maryland Heights has some legitimate concerns about how funds are managed now in a local flood-management district.

But a giant new development in a floodplain would represent a horrible attack on the environment that would have ramifications far outside of Maryland Heights. In a strange way, it's too bad that tonight's hearing isn't focused on the merits of helping Stan Kroenke. His presence would put a human face on an indefensible idea, even if it were worse environmentally than as corporate welfare.

If that happened, I bet everyone in town would understand how bad it is.