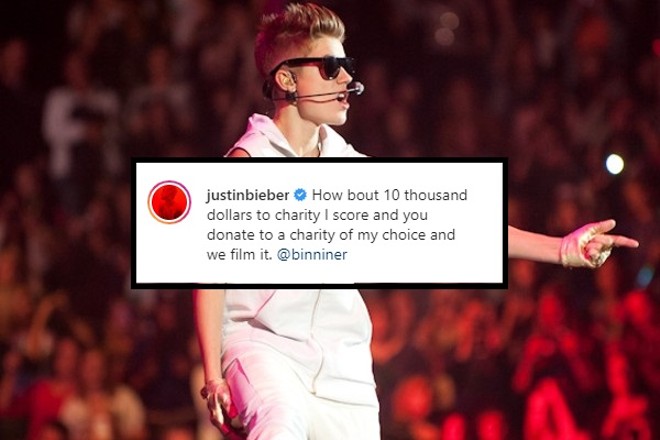 JON GITCHOFF/INSTAGRAM
Noted pop star and not-Stanley-Cup-winning champion Justin Bieber fancies himself a bit of a hockey player — and he may soon get the chance to be thoroughly disabused of this notion at the hands of the Stanley Cup-winning St. Louis Blues star goalie Jordan Binnington.

One may recall Bieber as the cherubic-faced pop star whose helmet hair and dance moves launched himself into stardom, but last week the Canadian's moves on the ice attracted the attention of Binnington.

Binnington, who came out of nowhere in 2019 and became a hometown hero, turned up in the comments on a Biebs Instagram post last week, which showed the singer scoring a goal in a recreational hockey league and celebrating by busting out an impressive on-ice pirouette.

Like my wife always says.... I got good hands


But Binnington, who has some good hands himself, saw opportunity in the Biebs' balletic overconfidence. In a comment, Binnington challenged Bieber to what is essentially a one-on-one matchup, writing, "10 breakaways me vs. you. You score on me I’ll dye my hair platinum blonde."

Yesterday, Bieber took to Instagram and shared Binnington's comment, adding that not only would he take the superstar up on his challenge, but upped the ante by challenging Binnington to put his money where his moves are:

"How bout 10 thousand dollars to charity I score," Bieber wrote. "[Y]ou donate to a charity of my choice and we film it."

As of this publication, Binnington has not responded to Bieber's bold and extravagantly doomed counter-challenge. We assume that's because he's either incapacitated with laughter or busy practicing some new goalie moves on that mini bike he used during the Stanley Cup parade.

Anyway, we all await the inevitable clash, which hypothetically could happen as soon as the 2020 NHL All-Star Weekend in St. Louis later this month.

And yes, while we'd all love to see a blonde Binnington, the Biebs has forgotten his place: When you come for the goalie king, you best not miss — which he will, because Bieber has made a tremendous mistake. Jordan Binnington is going to make him pay.

See also: Crotching Whiskey at the Justin Bieber Concert and Getting Thrown Out: A Review