Two Trains Running Is a Staggering Work of Beauty 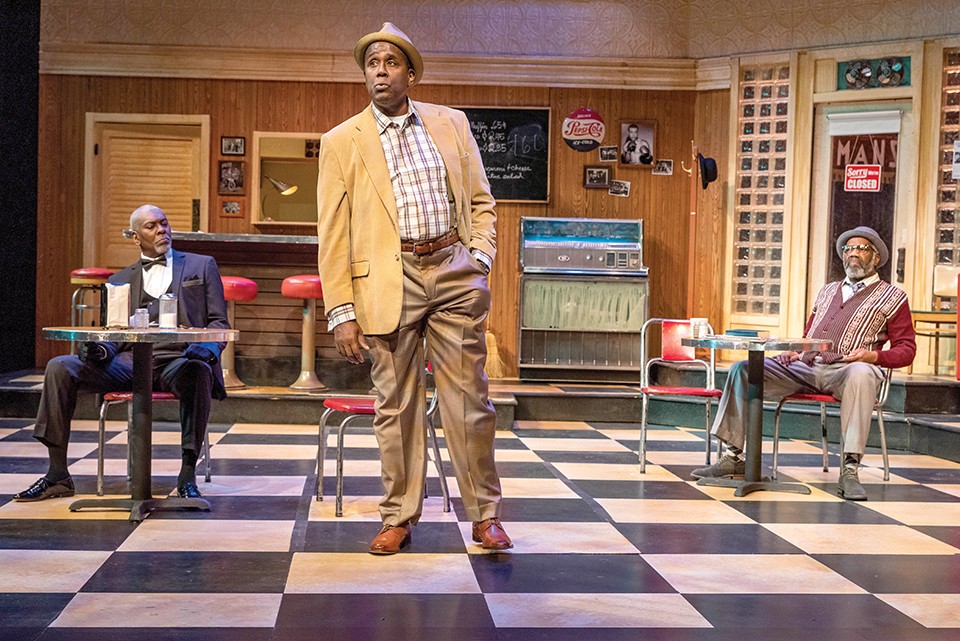 Wholesale change may be sweeping the nation in 1969, but in Pittsburgh's Hill District most people are preoccupied with more pressing issues to spare a thought about the rest of the country. The Prophet Samuel has just died, and his funeral (and the potential dispersal of his immense personal wealth) has the neighborhood riled up and dreaming of quick cash. Even worse, gentrification is poised to transform the next block, which means Memphis Lee's Diner is doomed. The once bustling establishment is a little dingy, a little too quiet, but Memphis himself is as stubborn as ever. He'll hand over his building but not until the city pays him what he's worth – eminent domain may be the law, but Memphis won't budge without getting $20,000.

There's a great deal of not budging at work in August Wilson's Two Trains Running, which is currently being presented by the Black Rep at the Edison Theatre. It's a five-alarm production, fueled by the cast's enthusiastic embrace of their characters and Wilson's theme, and Ed Smith's tender direction. Everyone at Memphis' diner wants something, but they all know the truth: You can't get more than the white folks are willing to let you have. As for the white folks, they can have anything they want. Your diner, your labor, your livelihood: it's theirs for the taking.

Memphis' diner has been reproduced with stunning accuracy by scenic designers Margery and Peter Spack, right down to the sour yellow walls and faded red banquettes. Through the flyspecked front window you can see people coming before they enter. Memphis (James A. Williams) runs the place from a seat at the counter, barking orders at the waitress, Risa (Sharisa Whatley), who rarely bothers to answer. Wolf (Carl Overly, Jr.) is parked near the payphone, taking people's bets on the numbers and frequently infuriating Memphis with the casual way he's made the diner his de facto office. Holloway (Ron Himes) is usually at a table playing Solitaire and talking with anyone who cares to engage in conversation. This excludes Hambone (Travis Banks), a ghost in battered coveralls who's stuck in a time warp, repeating "I want my ham!" to himself. Sterling (Jason J. Little) is fresh out of jail and does enough talking for two people; he loudly announces his plans to woo Risa, to help Hambone and his perpetual search for a job. They all return to their places in the diner every day and repeat the same tasks.

The only one free to come and go at any time is West (J. Samuel Davis), the wealthy undertaker who has made a standing offer to buy Memphis' building for $15,000. West is something of a mystic, who believes his wife's death has transformed his job into his calling. "When you breathe your last breath, then you done something. You become part of everything that ever came before," he says, speaking of the reward he'll happily claim one day to be with his wife.

Wilson's dialogue is razor sharp and full of boasts, warnings and portents. On paper, it's a brilliant play. With this cast, Two Trains Running becomes a living work of art. There are no false moments, no missteps — it's an evocative, unforgettable story performed with grace and beauty that holds you rapt until the final moments. Together they create the give-and-take between old and young, fight about the Black Power movement's methods, offer helpful advice and hatch half-baked plans that spill from one scene to the next. In these moments, Wilson preserved a slice of Pittsburgh as he knew it in his youth, because it was too precious to lose without a fight. What makes it entertaining beyond its historical value are the otherworldly qualities Wilson threaded through the story of Memphis Lee's fight against the system.

One thread is Hambone, who once painted a fence for the white grocer, Lutz, in return for a ham. Lutz decided Hambone didn't do a good job and refused to pay him anything more than a chicken. Every morning for ten years, Hambone has waited for Lutz to show up so he can demand his ham; now it's the only sentence he can say. The unfulfilled promise of a white man has caused Hambone's real name to be lost, and his mind has warped. He's an omnipresent reminder to Memphis that the game is rigged and always has been.

The other thread is Aunt Esther, the unseen shaman of the Hill District. Holloway says she's 322 years old, and that if you go to see her, she'll offer a penance if you're willing to take it. Holloway made the journey himself and recommends it to anyone who will listen. Technically, all of them have made the same journey: Aunt Esther's age would place her birth in the seventeenth century, when the slave trade first brought Africans to America.

That's where all their problems began, but now Hambone, Memphis, Sterling and Risa must carefully choose their path to the future, which arrives in the final act. It's marked by broken glass, a death, an alarm, the fulfillment of a promise and a celebration. Bloody but unbowed, they press ever on.