Brennan's Plans Chillest Move Ever, Relocating 45 Steps Away in the CWE

Google Maps
Brennan's has found a new home in the Central West End.

Brennan's has a new home in the Central West End — and fans of the longtime neighborhood bar will be happy to learn that it's only 45 steps away from the original.

We here at the Riverfront Times have just barely recovered from learning last month that Brennan's would soon relocate from its home of seventeen years. Now (great) news comes that, though not on the same street as the original at 4659 Maryland Avenue, the new spot is just around the corner at 314-316 North Euclid Avenue.

“I just did the walk. It’s literally 45 steps and 28 seconds from the old location,” Brennan said in a recent release. “I was walking cautiously, too, due to the slippery conditions from the snow, so imagine if you run!”

Located in the same building as the original, the new location will allow Brennan's to double the square footage on its ground floor, according to the release, and give Brennan the chance to update the bar's interior. The release also details plans for a new basement hi-fi bar and lounge and a "refreshed" second floor private cigar club. In its new home, Brennan's plans to offer a new food and bar program as well.

“Though the original Brennan’s space has treated us well over these last seventeen years, the current layout limits our abilities as a bar and restaurant,” Brennan said. “We love the Central West End and wanted to stay in the same building. The new Brennan’s space will increase square footage in areas that are important to the customer experience and allow us to improve food and drink service.”

Brennan's first announced plans to relocate from its home of almost seventeen years in a Facebook posted in early December. At the time, Brennan's said that the move was due to the expansion of the Saint Louis Chess Club and that he didn't have a new building identified yet.

"To put it simply, word got around about this big change sooner than we'd hoped," Brennan's shared in the Facebook post. "We can't tell you too much about our plans for the future at this time, but we're getting ahead of the rumors to let you know the situation."

Billionaire Rex Sinquefield is the founder, president and chairman of the board for the Saint Louis Chess Club and Scholastic Center of Saint Louis, which first opened in the Central West End in 2008 at 4657 Maryland Avenue, just next door to Brennan's. Since opening eleven years ago, Saint Louis Chess Club has already expanded once, relocating the World Chess Hall of Fame from Florida to 4652 Maryland Avenue in 2011. A partner business, Kingside Diner, which is chess-themed, opened next to the Saint Louis Chess Club in 2015. (The diner operates a second location in Clayton.) With Kingside, the grouping of businesses has been dubbed the "Chess Campus," and now, Brennan's former home has been added to the board.

The original location will remain open until "at least April 15," per the release, and the new bar is slated to open in late spring, with the cigar club opening following soon after.

“We’ll miss the original spot, but we’re excited to show people a new and improved space,” Brennan said. “You have to keep things interesting.”

To learn more about what the new Brennan's has in store for customers, here are descriptions of the four spaces as detailed in the release:

The Cigar Club: "We have redesigned our second-floor private cigar club to offer more open space, better amenities, and an extensive list of spirits and cigars. We’ll be spinning the best of jazz, blues, and bossa nova on vinyl as we’ve done the last nine years.

The Sneaker Room: "Hidden below and outta sight, your new late-night haunt is here. This hi-fi bar and lounge will offer an eclectic mix of music and cocktails." 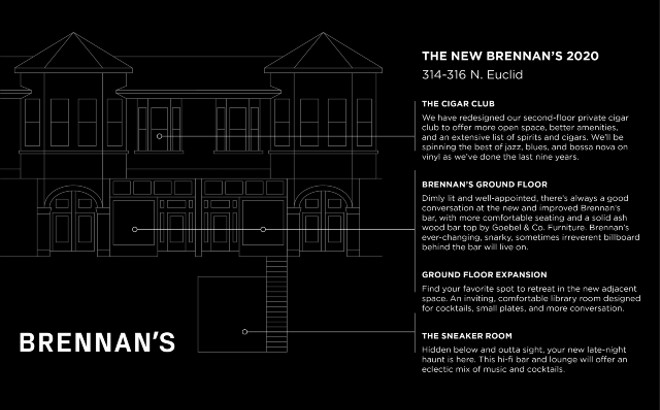 Courtesy Brennan's
Another rendering of Brennan's new home in the Central West End.