A Farewell to Fubar After 12 Years of Hardcore, Heavy Metal and Hip-Hop 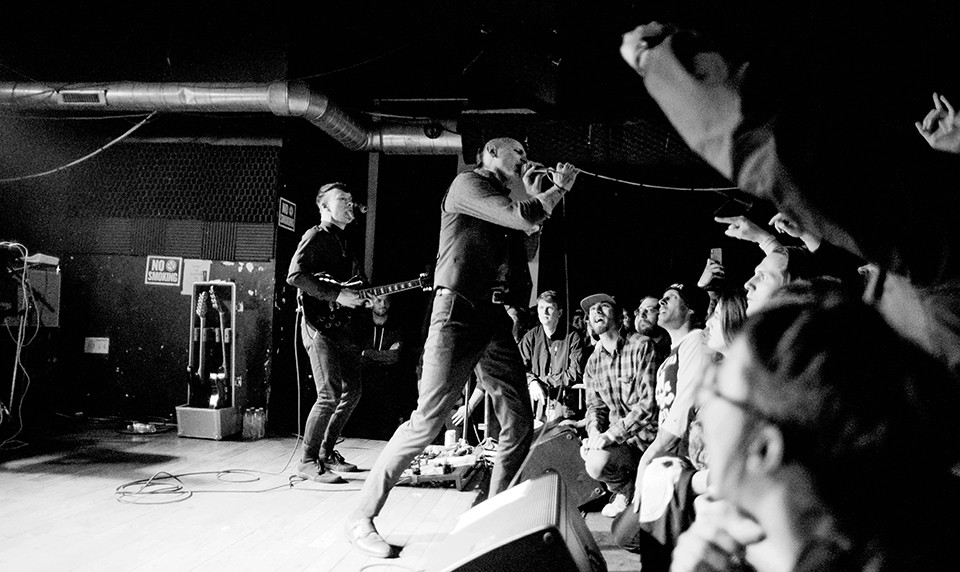 CHELSEA DUFRESNE
Rhode Island noise-rock act Daughters is just one of many influential bands that graced Fubar's stage over the years.

By the time the last notes of Ultraman's set have rung out on February 15, 2020, Fubar will have stood tall for twelve years as St. Louis' de facto home of hardcore, heavy metal and hip-hop shows. In that timeframe, innumerable venues have come and gone while the shotgun-style, double-sided space occasionally called the Funbarn defied the odds.

But, as the cliche goes, all good things must come to an end. Fubar is closing, and in its place a much larger, shiny new venue, Red Flag, will open its doors.

St. Louis scene veterans will know that we can't discuss the history of Fubar without bringing up long-shuttered venue the Creepy Crawl. A staple of St. Louis' hardcore and heavy metal community in the '90s and early aughts, not only did the Creepy Crawl host a wide range of shows from iconic bands, the tiny, stickered-up North Tucker dive employed several of the key players who would go on to open the short-lived second Creepy Crawl on Washington Avenue — and eventually Fubar.

Fubar would prove to be at least a slightly classier evolution of the dingy punk rock joint while still maintaining the ethos of the hardcore culture, as most evident in its logo — a blatant homage to the iconic Black Flag bars tattooed on many of the venue's patrons.

Over its decade-plus run, Fubar has hosted scores upon scores of iconic punk and metal acts: Black Flag, Fear, the Dead Kennedys, the Business, T.S.O.L, H.R. from Bad Brains, Pentagram and many, many others have all come through Fubar's hallowed halls. These names may not mean much to the average Warped Tour scenesters, but for those who grew up on these acts, and grew old with these acts, Fubar has been a stalwart of the community. Every middle-aged St. Louisan with a mohawk knows that they could go see their favorite bands and enjoy some cheap canned beers at the bar (or in their car) without paying exorbitant fees or dealing with militant, fun-hating security.

The venue began as one large, shotgun style room with a stage near the door and the bar at the back. When entering the venue, you could go straight in to the main room, or 21-and-up patrons could make a detour to the left and hang out in the lounge, quietly enjoying beers and socializing while the opening bands played. A couple years into Fubar's tenure, the lounge tables were cleared out and DIY promoters could rent the area for their own shows, as long as they brought their own PA.

Eventually, that bare space gave way to a small stage a couple inches high and house PA stacks with side-fill monitors, which in turn gave way to the approximately two-foot-high stage that stands there today, equipped with the PA system from the now defunct Firebird. In the past couple of years, Fubar's owner Bob Fancher has even upgraded the venue side to include a modest green room and a crow's nest area in the back.

For all the good times, unfortunately there has been no shortage of controversy over the past twelve years. As both Fubar and Red Flag reside at Locust Street and Cardinal Avenue, Fubar has always relied on metered street parking, much of which lies out of eyeshot of venue staff and concertgoers outside enjoying a smoke. Most folks opt not to pay for the secured lot across the street — which provided a veritable buffet of potential loot for anyone who knew how to pop a lock.

This crime wave came to a head from 2014 to 2015, after a certain sludge band was ripped off for a couple grand in cash, which spurred a particularly aggressive streak of break-ins. This resulted in a lot of bright-eyed and bushy-tailed young bands getting their first taste of the grittiness of the world, some of them adamantly and very publicly insisting that Fubar employees, even the owner himself, conspired to commit the robberies.

The actual culprits of these crimes eventually being apprehended did very little to relieve Fubar of their reputation as the place where bands get robbed, and seldom, if ever, have any of the accusing bands apologized for the controversy. Fubar, for its part, combated this crime surge by increasing lighting outside the venue, posting signage encouraging patrons to not leave valuables in their cars, advising where to park and oftentimes employing additional staff to specifically watch the outside areas.

Speaking as a musician myself whose first real venue show was at Fubar in summer 2008, as well as a former employee and just in general a dude who goes to a decent amount of shows, the closing of Fubar is definitely bittersweet. I've gotten to see so many of my favorite bands there, played some of my biggest shows there and learned a lot about the music industry there. While Red Flag surely offers a bigger, arguably better concert experience, we still don't know a whole lot about what this means for the smaller shows that have long been a mainstay of the venue and lounge.

Fubar typically capped out at about 500 people, whereas by some estimates, Red Flag could accommodate as many as 1,200, putting it in league with Delmar Hall, Pop's and the Pageant. The closing of Fubar represents the death of one of the last of a dying breed of mid-sized venues in St. Louis, which could certainly serve as a boost to some of the smaller, more DIY venues in town such as the Sinkhole.

I will miss it, but I for one can't wait to see what the new space offers, and I can't express my gratitude enough for what Fubar has provided to this city's music community over the past twelve years. It will be missed.