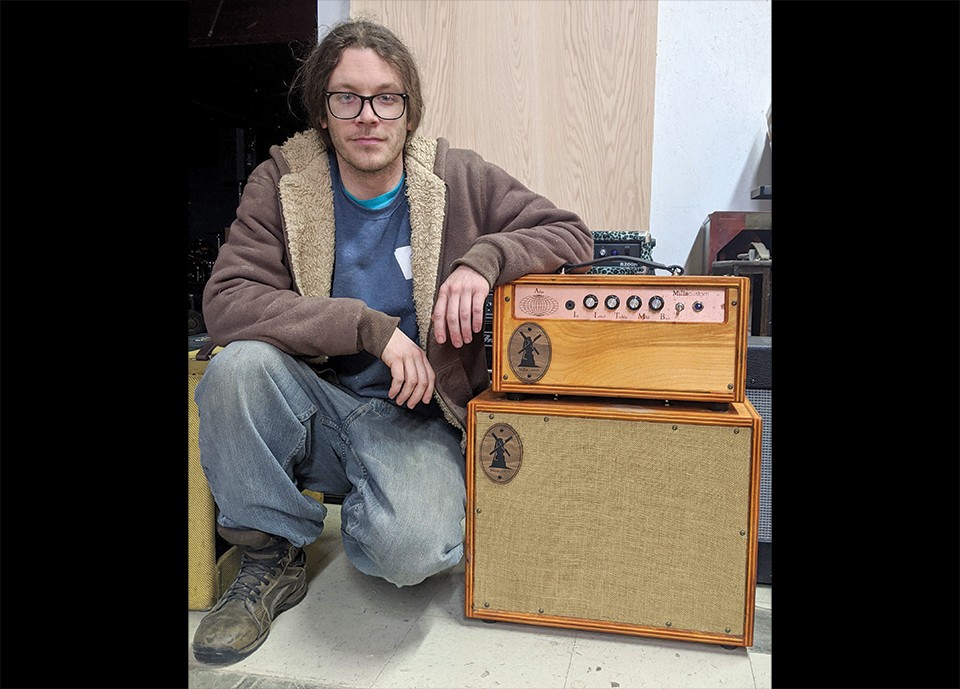 VIA MILLS CUSTOM
Justin Mills poses with one of his creations, a 50 watt Atlas amplifier with a 1x12 cabinet.

Just south of the Hill neighborhood, in the shadow of the looming, green-domed St. Louis Psychiatric Rehabilitation Center, sits an unassuming warehouse that holds quite a bit of firepower. The headquarters of Gateway Fireworks Displays doesn't look like much on its quasi-industrial stretch of Fyler Avenue, but it houses the materials that illuminate the Cardinals' home victories, corporate events and even El Monstero's bombastic Pink Floyd tribute sets.

In fact, the members of El Monstero use that warehouse as the band's rehearsal space, and just beyond their amps and drum kit sits the workshop of a smaller operation, but one that is also focused on making a big noise. Justin Mills uses his corner of the warehouse to make bass and guitar amplifiers for his line, Mills Custom. His amps, prized for their light weight, their unique mix of tube and solid state technology, and their distinct wood-grain aesthetic, are a common sight on local stages.

Mills' career as an amp builder started back in his home state of Florida, where a few strands of his background combined: He studied sound engineering, which gave him insight into the technical aspects of sound amplification; his work as an art handler at a Miami gallery taught him how to work with wood; and his time as a gigging musician convinced him to ditch heavy amps for something easier to lug around.

His move to St. Louis was hardly part of any master plan, he says; he had begun building amps and pedals back home but sought a change of scenery. "I needed to get out of South Florida — I had been there my whole life," Mills explains. "I wanted a change, and shipping costs on this stuff were killing me from Miami." Mills sought a more centrally located base for his operations: Chicago was the first choice, but one look at real estate prices in St. Louis led him here. "The rent for a whole house was $700!" he says, laughing.

Mills Custom uses a windmill for its logo, and in a fitting bit of kismet, his drive into town took him along Gravois, where he eventually passed Bevo Mill. "The day we rolled in here we passed by Bevo, and we had just come up with that logo," Mills recalls. "So it was a total coincidence, but we said, 'OK, cool, we're in the right spot.'"

Despite never having set foot in town, Mills settled here almost five years ago. Initially, Mills Custom was run out of his basement — a novelty in itself for someone who comes from below sea level: "I was really enthralled with the concept of a basement because I never lived anywhere where they existed," he says. A few different locales followed — including the backroom of the Gaslight on the Hill — before settling in the back of the fireworks warehouse.

Mills Custom amps are marked by their exposed-wood casings, compared to most off-the-shelf amps and their tweed or Tolex coverings. Mills' process includes all-natural wood dyes as opposed to stains or lacquers, and heavy-duty burlap covers the speaker enclosures. "It's super organic; I try to make as little of a carbon footprint as possible," he explains.

Mills is in the midst of restructuring his line of amps at the moment. His biggest seller is the Atlas, which he describes as a clean-sounding, straightforward amp — what gear-nerds would call a "pedal platform" for its ability to showcase the nuance of stompboxes rather than impart its own intrinsic tonality. The Bayonet is his bass amp; the Hatchet guitar head offers a clean channel and a high-gain distortion channel. The forthcoming Foundry adds a third, "super high gain" channel that Mills considers his flagship.

While Mills Custom has partnered with Gaslight Studios for marketing help, the company does very little advertising outside of social media posts; Mills' success has been almost purely a product of word-of-mouth enthusiasm from local musicians (Brother Lee & the Leather Jackals use an array of Mills amps on stage, for instance).

Ryan Wasoba, who produces local bands in his Edwardsville, Illinois-based Bird Cloud Recording, initially bought a Mills Hatchet to play in the instru-metal band Thor Axe but now uses it in many different settings, both live and in studio.

"What really surprised me is how versatile it is. I've used it at Bird Cloud for metal, jangly indie rock stuff and even on bass for a jazz record," Wasoba says. "There are a few times clients have brought in vintage Marshall or Orange amps, but they ended up using the Mills instead."

Plus, Wasoba notes, Mills' technical abilities and willingness to troubleshoot errant Fender and Ampeg amps only sweetens the deal. "Justin is also the only amp tech that I trust completely," he says. "I love Justin, he's truly one of my favorite people. But even if he was a total asshole I would still swear by his work."

Mills is able to road-test his products as a member of several local bands, including Bounce House and O'Ivy. But he says that he takes a different, deeper satisfaction as an amp builder.

Where he once was driven by his own creative ideas, "now I get to create the palette" through these amplifiers, he says. "I get to make the things that inspire artists rather than write a song itself."