Take it From a Bernie Sanders Voter: Joe Biden is Dems' Best Shot to Beat Trump 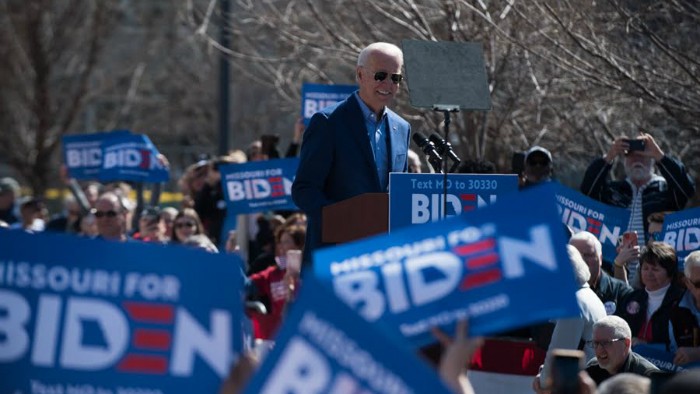 TRENTON ALMGREN-DAVIS
Former Vice President Joe Biden at his rally on Saturday in St. Louis.
I’m a capitalist who voted for Bernie Sanders in the 2016 Democratic presidential primary. I have no regrets.

At the time, I was captivated by Sanders’ passion and idealism, like so many other supporters. Unlike most, I expected he could enact just a fraction of his egalitarian ideals into law (still the case today), but I was good with him moving the needle in the right direction toward a government that had more fairness and compassion.

Also, I didn’t think Hillary Clinton, an establishment candidate, could buck the nation’s tendency to limit political parties to two terms in power. That tradition was broken just once since FDR, in 1988. President Barack Obama, the best of my lifetime, had served eight years. It seemed Clinton lacked the fire to buck history.

Turns out, it was more than that. The shrouded sexism factor, which continues to plague women presidential candidates to this day, was worse than most imagined. So were Clinton’s challenges with authenticity and empathy and that awful campaign strategy and even the Monica thing.

It’s academic to wonder whether Sanders might have defeated Donald Trump — he would, after all, have been plastered with the false label of “Communist” in breathtaking ways — but it is likely that Bernie and his energized army would have at least shown up in places like Michigan, Wisconsin and Pennsylvania, each of which Clinton lost by less than one percent.

This year, though, it’s different. Enough with the ideological struggle. Exorcising Donald Trump from the White House is all that matters. This is about democracy and the rule of law. It’s about a devotee of Russian dictator Vladimir Putin openly craving to be America’s Putin. Trump does so with the open and unapologetic help of Putin, who Trump flattered on the world stage as more credible than U.S. intelligence and law-enforcement agencies after they proved he aided Trump’s election. That’s coming again, to a polling place near you.

We have a president who snuggled with dictators around the globe, demeaned our allies, uttered more than 16,000 empirical lies (including, most recently, some dangerous whoppers about the coronavirus), ravaged the environment, attacked science calling climate change a “hoax,” declared presidential powers “to do anything I want,” flouted laws on foreign policy, emoluments, obstruction of justice and more, called the press “enemies of the people” and Nazis “fine people,” put kids in cages and demonized Muslims, Hispanics and others, uttered racist and xenophobic slurs against political opponents and nations, derided Republican critics as “human scum” and tarred public servants who dare cross him as “deep state” traitors and spies.

Trump demands personal loyalty to himself at all cost. On cue, Republican politicians in both houses of Congress genuflect before Trump in a manner that would make Putin blush. That’s scary stuff to students of history.

So, I’m done listening to Democrats and others argue the finer points of policy. Guess what? A President Biden and a President Sanders would accomplish roughly the same things on these larger, burning issues, which is not much. For reference, search “Obama, 2009, Affordable Care Act, public option.”

At this point, it’s Joe Biden.

In a perfect world, Biden would be too old, too prone to gaffes and too idiosyncratic. But this isn’t a perfect world. It’s the one in which Trump is president.

What America needs is someone to calm the nation down and restore its dignity in the world. Biden is easily underestimated because of his anything-but-slick delivery and occasional goofiness. But he also has decades of experience in foreign policy and other serious matters of government. He’s competent and can even reach across the aisle.

I think those are the reasons for his historic political resuscitation. Few knew until the Jim Clyburn Miracle of South Carolina that Biden possessed the reservoir of trust and goodwill to bring out traditional Democratic constituencies of color in vast numbers, without campaign dollars or a ground game, based on name and reputation.

But it wasn’t just about the politics of race. The Democrats’ most critical yet underrated constituency — the black community — arrived at two common-sense conclusions. One, all that matters is Trump’s extraction. Two, get it done with someone we know, and who knows us.

That’s just as true for whites and all races. The conclusion was rational, not racial. This is a national emergency, and the nation needs someone trusted to bring people back together, to repair the damage of Trumpism. In that context, Biden is the most logical choice presently available.

Biden scored margins of victory of more than three-to-one over Bernie among black voters, despite that legendary, well-funded movement. This signaled Biden could organically produce the extra turnout that has been a central part of Sanders’ messaging, but not his recent reality.

I think the same will hold true for Biden in another core (albeit new) Democratic constituency: suburbia in regions like St. Louis. Voters in the suburbs, especially women, are unambiguous about their disgust with Trump. But they can trust Biden. In Bernie, they see a financial threat.

That’s a big difference, and not just in cities and suburbs. For months I’ve heard privately from many Missouri Democratic politicians — and some never-Trump Republicans — that they fear a statewide down-ballot avalanche if Sanders were atop the Democratic ticket.

That’s notable because Missouri isn’t a state in play on the national landscape, where everything comes down to whether the Democrats can re-flip those Rust Belt states, and maybe pick up a few others, where Clinton fell short. But even if an immovably red state like Missouri doesn’t matter to the national ticket, the national ticket matters to Missouri.

Don’t trust me, though. Take it from one of the most astute national pundits, a fellow named Donald J. Trump.

Sure, Trump uses syntax and vocabulary that would hold a kid back a year from fifth grade, but he’s a reality-TV-grounded expert in contemporary political marketing. That’s why he was having all those political errands run to Ukraine: He feared Joe Biden as an opponent. He was desperate to take out Biden and just narrowly failed. Trump understood what might happen on some Super Tuesday, and why.

Biden got a slow start because of all the mud slung at him, but he was able to take Trump’s best punch and is still standing. I still like Bernie as a warrior, too. But Trump liked him as his perfect opponent.

Here’s hoping that, for once, Trump can’t have what he wants.

Ray Hartmann founded the Riverfront Times in 1977. Contact him at [email protected] or catch him on St. Louis In the Know With Ray Hartmann from 9 to 11 p.m. Monday thru Friday on KTRS (550 AM).