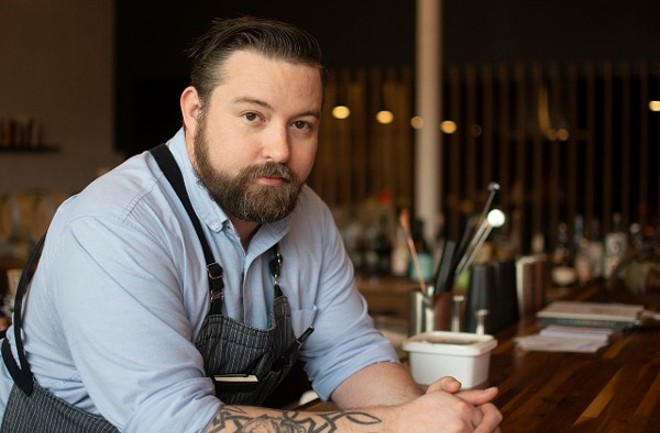 ANDY PAULISSEN
Andy Printy is embracing the abstract way of life as a source of creativity for Bulrush.

In the time since the COVID-19 pandemic temporarily shuttered Bulrush (3307 Washington Avenue, 314-449-1208) in late March — and even in the weeks leading up to that point — Andy Printy has experienced a range of emotions. There was the uncertainty in the beginning about whether or not he would have a job and what that job would look like on the other side of the stay-at-home orders. There was gratitude that he had an employer — chef and owner Rob Connoley — who valued his team and created a business model that allowed them to remain productive even while the doors were closed to the public. Then came the guilt that he had a job when he knew others were suffering.

"There was a solid month of feeling bleak, because I didn't see us coming back, and we didn't know how long this would last," Printy explains. "But when it happened, there was a certain amount of guilt there. We're one of three industries that lost jobs, and I am lucky that our restaurant has an ongoing research problem — learning how to tell a story that doesn't get told very often, and the pitfalls for the average white male to tell that story. Rob keeps us busy, and while I've had a lot of off time, there has been somewhat of a schedule of projects so that we are employed. There's some guilt about that, and I've been sitting here processing these emotions solo. You can try to do it digitally, but there, people aren't always saying how they are really doing."

Like his peers in the bartending field, Printy has seen his world turned upside-down as restaurants and bars closed in response to the pandemic. However, Printy considers himself fortunate because of the fact that Bulrush has found a way to continue its work, even as its doors remain closed. Not only was the restaurant able to secure a Paycheck Protection Program loan which provides Connoley with the means to continue to make payroll, but the fact that the restaurant is involved in ongoing research into Ozark food and culture means that there remains meaningful work for the staff to do. From foraging to working on how to vaporize part of the redbud tree, Printy has remained engaged in the restaurant and feels the responsibility that comes with it.

"When we come back, we need to adjust to a new future and be driving new points home and give people new things to walk into," Printy says. "We've had all this time and opportunity, so I don't want to blow it. There's the pressure."

Printy admits he has no idea what coming back will look like. On one hand, he notes that it's human nature to want to get back to "normal" and act as if nothing happened. On the other hand, he thinks the effects of social distancing will be felt for a while, with people remaining uncomfortable being in large public spaces, even after stay-at-home orders are lifted. However, one thing he is sure about is that his job is not in danger of becoming automated — and the other side of the pandemic will give him a little more clout when people get handsy with his ingredients.

"I don't see robot bartenders as happening," Printy laughs. "People want to talk to a real person behind the bar. One thing that will change, though, is that I'll finally get to be really strict about who touches my garnishes."

Printy took some time away from his cocktail research to share his thoughts on the non-economic motivations for bartending, how he is trying to embrace this unprecedented time and the things that give him hope during this crisis.

As a hospitality professional, what do people need to know about what you are going through?
I think it’s important to know just how committed and ingrained most of us are into this industry. Most of us work beyond the scope of our “pay” to get the results we want and properly display these results to our guests. I say this because I’ve heard some rumblings about how it’s OK if some restaurants close, as others will open. This in no way takes into account the loss of time, effort and momentum that was invested prior to the closings, layoffs and concept changes. It’s a personal loss on all levels, and there’s been some grief to process because of it.

What do you miss most about your job?
I probably miss that look on a guest’s face when the cocktail, dish and service all line up to over deliver on their expectations!

What do you miss least?
Not a difficult one to answer here: polishing glassware. I mean, yeah, it’s gotta be done. I like the break in the action though!

What is one thing you make sure you do every day to maintain a sense of normalcy?
A lot of brands and other bartenders have been doing “live discussions” on social media, and I try to participate as much as possible. I think it helps us emotionally to still know we have ideas and concepts to share and help advance our vocation. But, to be honest, not a lot. Most of my “normal” routine has been put on the sidelines. I kind of decided to take a different approach and accept that nothing is normal, and I’m trying to use this “abstract” way of life to help inspire and prepare for when we reopen Bulrush. There’s a kind of hidden perfect storm of isolation, stress and life-changing events that should ideally generate some new perspectives and creative motivation. I think I’m just trying to be present for that.

What have you been stress-eating/drinking lately?
Top three: Bourbon — I'm shamefully on my second bottle of Four Roses Small Batch, Select Pizza — just trying to fill the void left by Pie Guy and Kit-Kats — that’s new for me!

What are the three things you’ve made sure you don’t want to run out of, other than toilet paper?
Bourbon, toothpaste and dish soap, as I am constantly destroying and then cleaning my kitchen.

You have to be quarantined with three people. Who would you pick?
My good friend Cameron Sheridan. We have great chemistry when it comes to bouncing ideas and brainstorming. Zach Conley from Una Vida Tequila; he's a chill guy that would definitely be forcing me to work out! Michael Winslow from Police Academy … could be fun to have someone making comical sound effects as I wander my apartment …

Once COVID-19 is no longer a threat and people are allowed to go back out and about, what’s the first thing you’ll do?
I have thought about this a lot. The first thing I’m doing is going to Pie Guy for a cheese pie!

What do you think the biggest change to the hospitality industry will be once people are allowed to return to normal activity levels?
I think our numbers are going to be less initially, but I think that translates into the guest’s experience. The ones who haven’t changed careers and come back are going to be the truly dedicated.

What is one thing that gives you hope during this crisis?
Not since the Marine Corps have I seen such an example of camaraderie. People in this industry have been leaning on each other since the start of all this. From Dustin Parres of Lux Row Distillers dropping off home cooked meals to furloughed bartenders, Una Vida and their “tequila fairy” program, to the exchange of care packages between peers based on what they have excess of. It all gives me this warm and fuzzy about the type of people that choose to be in the hospitality industry.