When COVID-19 initially reared its ugly, industry-destroying head, the live music business was among the first in its sights.

The concert cancelations kicked into high gear by mid-March. Pearl Jam was one of the first to cross off its St. Louis show — a sensible move, given that the band's members had witnessed just how bad this virus can get as it ravaged their hometown Seattle, one of the early epicenters of outbreak in the United States.

More acts soon followed, in a steady trickle that gave way to a colossal wave. Galactic canceled its tour, as did Anna Burch. The Zac Brown Band, Arlo Guthrie and Bob Weir were more early St. Louis cancelations. Soon enough, as the World Health Organization upgraded the coronavirus crisis to an official pandemic on March 11, virtually all national tours were put on hold.

Locally focused shows were next. Lo-Fi Cherokee, the annual takeover of Cherokee Street spearheaded by St. Louis filmmaker Bill Streeter, was postponed. A planned memorial show for Brandon Arscott, a longtime fixture in St. Louis' hardcore punk scene who died unexpectedly in November, likewise had its plug pulled by organizers. 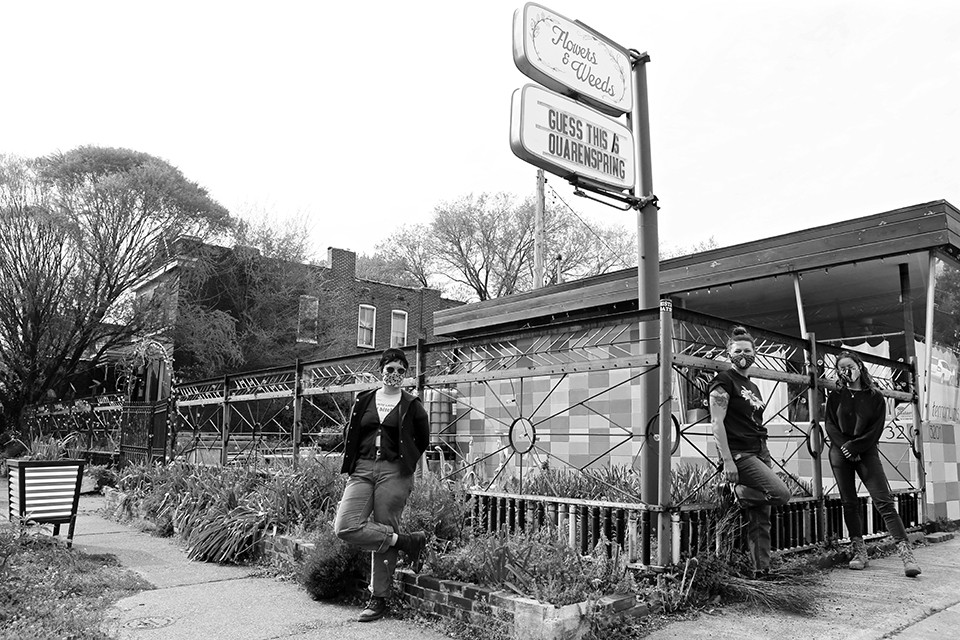 Then, on March 23, the local live music scene was dealt a crushing blow as city officials enacted stay-at-home orders that shuttered businesses and limited the number of people who could gather in a crowd. Suddenly, even the small local shows were canceled and the venues closed, with thousands across the city — from venue employees to promoters to the musicians themselves — suddenly out of luck and out of options.

A prolific photographer with a keen eye and an instantly recognizable style, Burrell has spent the majority of his career shooting musicians and live concerts. His portfolio includes shots of some of music's biggest names — Kendrick Lamar, Outkast, B.B. King, Fiona Apple, Beck, Neil Young, Questlove, the Black Keys and even the late John Prine, who died of COVID-19 in April.

But Burrell is also equally well known for working with musicians involved in St. Louis' music scene on a local level. He's shot album covers and promo art for such local luminaries as Pokey LaFarge, David Beeman, Beth Bombara and the Maness Brothers. He even served as the official photographer for LouFest before its demise. 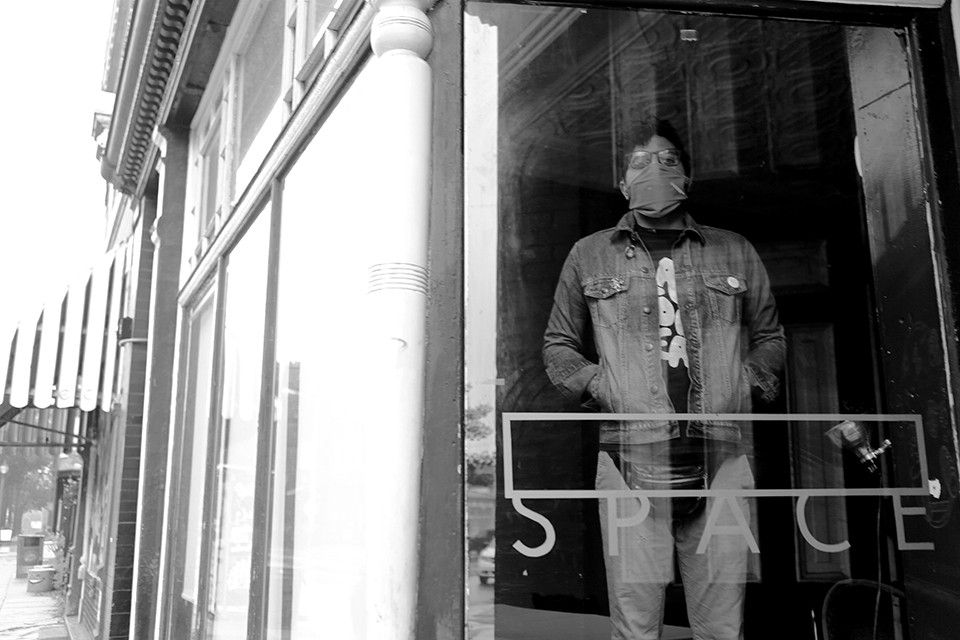 The pandemic put a sudden halt to all that, but Burrell knew that he wanted to keep shooting. And so, the COVID Days project was born.

"Well, everybody knew that this was going to be a historic event," Burrell tells RFT of the pandemic, "and something that we may not see again — and hope to not see again. But as a photographer, it's something that you want to point your lens on if possible, in the most respectable way."

So Burrell decided to photograph members of his community that were navigating this perilous and uncertain time together. And, for a change, not all of his subjects would be musicians — he was interested in documenting those in fragile industries that were sure to be hard hit by the coronavirus crisis. Restaurants, coffee shops, music venues — businesses that live on razor-thin margins even in good times, and whose future was more uncertain than ever.

But first, he says, he wanted to let the new reality sink in for all parties involved.

"And so I sat there for a little while and let a month set in, to be honest with you," Burrell says. "I wanted the 'we're off of work' feeling to not be there; I wanted it to feel as real as it is."

So Burrell let a month pass, then shot the entire project — consisting of 79 people across 46 photos — over the course of two weeks in April. 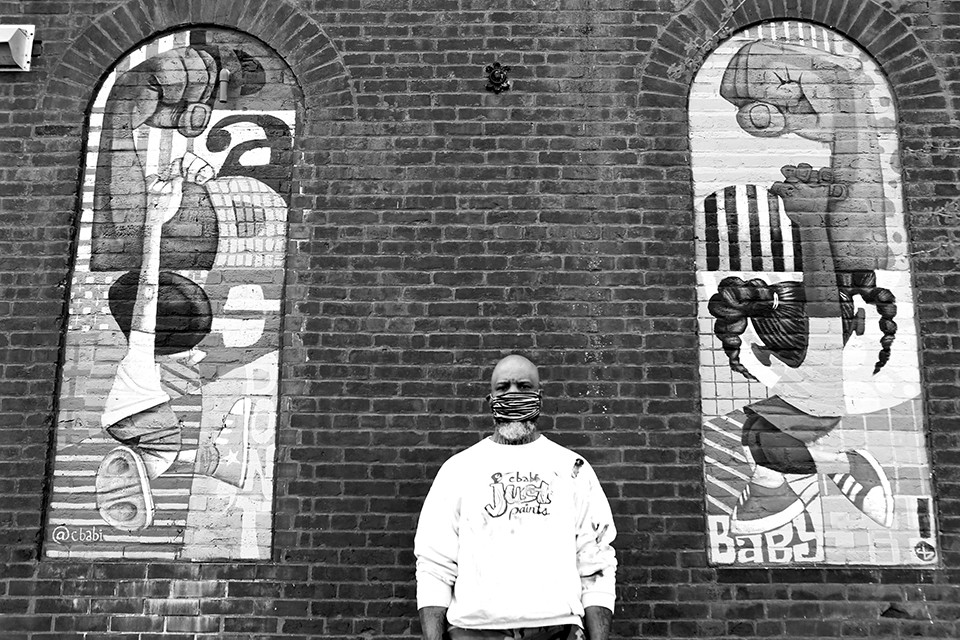 "I chose to shoot the project in a two-week timespan so the images had some kind of uniformity, in the sense of not just that it's business owners and community members, which it is. It's basically everybody in an industry that's fragile and was already probably pretty difficult to make their way in it, but going forward is likely to be vastly different," Burrell explains. "But I wanted all those photos to share that two-week timespan in the sense of having that same level of experience of the reality of the situation. So that's kinda what it was."

The results are striking. Shot in Burrell's usual black and white, the series features its subjects posing in front of their businesses and places of employment, all clad in masks (save for one small child). Burrell has long been adept at capturing not just the imagery at hand, but what feels like the soul of the subjects of his work, and his COVID Days project reveals those souls as restless and uncertain, resolute but shaken, down but not out. 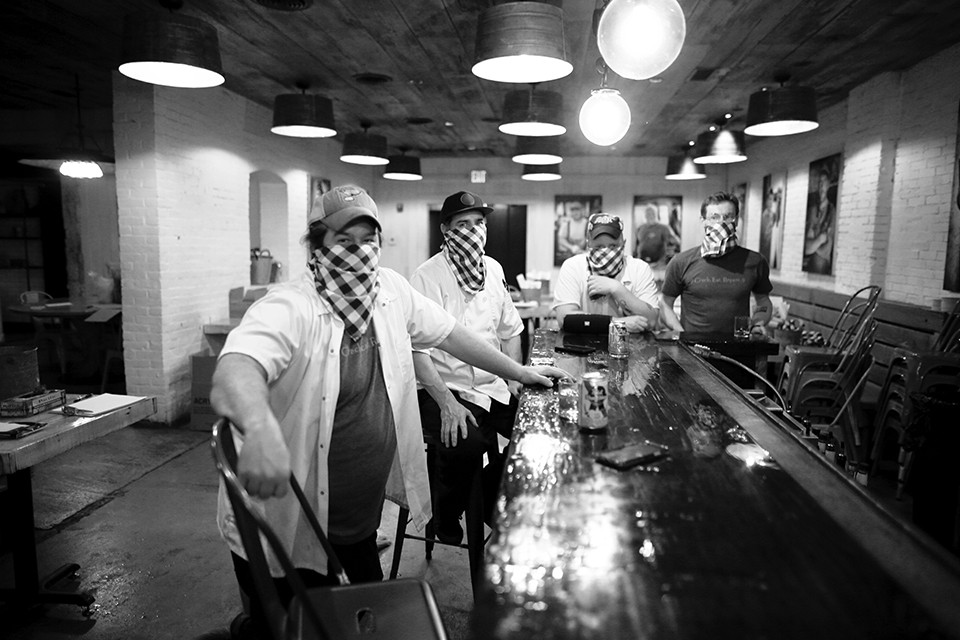