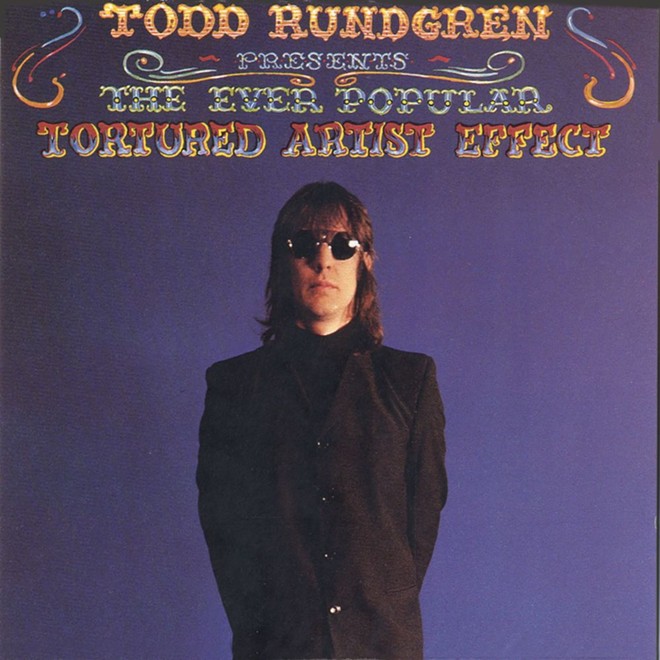 Each week, ex-KDHX DJ Chris Ward examines a song from his quarantine-based playlist dealing with isolation, loneliness, hope and germs. This song and more can be found on the Spotify playlist, “Pande-mix: an end of the world playlist”: https://spoti.fi/2WZGTJZ.

“I can feel my will slip away”

I have a checkered history with Todd Rundgren. I had this next-door landlord in Springfield, Illinois – Eddie, great guy – who used to punch out at his city job, slide down the tail of a brontosaurus right into his NASCAR-themed garage, drink Miller Light until midnight, and noodle on a bass while his wife stayed in the house. In other words, the life. He had buddies who would come around, no joke, like the opening credits of King of the Hill at 5:02 p.m. One of these men had a white ponytail like exactly you’re imagining. He also had that braying smoker’s laugh that accompanies his own non-jokes and makes everyone deeply uncomfortable. This guy was the first Todd Rundgren superfan I have ever met.

I didn’t know this was a thing. It’s a thing. He, like other superfans, call him “Todd” when talking about him. Casually. Imagine if Jimmy Buffett fans still had none of the taste, but were boomer drug addicts instead of boomer alcoholics. That’s Todd Rundgren superfans. He gave me a DVD of Todd’s '90s experimental music videos that would “blow my mind.”

If you go to Todd’s website, TRconnection.com – where 1997 has been quarantined and preserved in HTML amber – you too may have your mind blown. If you thought the original Space Jam website was a trip…brother, hold on. Somewhere, a pony-tailed webmaster with a raspy cough awaits your visit through Netscape Navigator. This is his current, updated website, mind you – note the 2020 tour dates. But if there’s anything more comforting than going down the wormhole of a pre-social media Angelfire page these days, I don’t know what.

Let your guard down, let your will slip away. Let Todd’s website happen to you. What is at first jarring and garish suddenly becomes nostalgic and soothing – a time when Computer Rooms were a thing. And these are the types of online bunkers it’s nice to spend a little time in, once in a while, during a scary time. As long as we’re not, you know, a chickenshit president with actual things to do.

I like it because no one could pick out Todd’s voice in an AM Gold lineup – it could just as easily be Daryl Hall singing this song. I like it because it’s light, it’s breezy, and it’s synthy. And I like it because the crash and ride cymbals are hilariously dull every time they hit in a way that makes me laugh as I’m signing Todd’s Angelfire guestbook.

This song and many more can be found on Chris Ward’s Pande-Mix playlist on Spotify.
© 2023 Riverfront Times