U.S. Attorney General Bill Barr is something of a rare sight these days, but on Thursday he swept into a conference room in St. Louis' federal courthouse to helm a painfully brief press conference on "Operation Legend" — and while Barr and the assembled police officials touted the program as successful, the details they unveiled fail to provide a compelling case that federal intervention has actually changed much about a historically violent summer in St. Louis.

"The first duty of government is to protect the safety of its citizens," Barr told the reporters. "That is primarily a state and local responsibility, but the federal government can make a contribution primarily in the area of guns and gangs and drugs."

Barr's remarks on Thursday lasted less than ten minutes and he took no questions — though questions remain about a federal operation touted as leading to 650 arrests, 219 weapons seized and 274 people facing federal charges.

Beyond those numbers, the only data released by Barr's press conference took the form of a single poster printed with crime statistics. It compared the eight weeks of St. Louis' violent crime prior to August 13, when the St. Louis expansion of Operation Legend was announced, to an eight week-period that ended October 8.

DANNY WICENTOWSKI
As support for Operation Lenged's success, the DOJ unveiled a curious comparison of crime stats from within the same year.

At the top of the poster was its gaudiest stat: A 49 percent drop in homicides, from 79 in the first eight weeks of summer to 40 in the following eight.

It was this detail that Barr highlighted in his own remarks, along with a 38 percent drop in rape and 17 percent drop in aggravated assaults. Indeed, it looks like a significant outcome. At least, that's how Barr presented it.

"The federal government can bring to the table more than just additional resources," he said and noted that the agencies have powers to detain "dangerous people" before trial in ways not available to local and state police.

Barr added, "It's the strength of the federal system that really makes a difference."

But it doesn't take a room full of state and federal law enforcement officials to see that something is wrong with the supposed accomplishments of Operation Legend. The data presented is a careful statistical construction that is contradicted both in format and content by the city's own homicide numbers. And while Barr attempted to use those numbers as a PR win at a time when he could really use one, the real story here is the off-the-charts, gut-wrenching number of murders that have hit St. Louis this year.

So, no: The city's homicides were not "cut" by 49 percent after Operation Legend came to town, as was suggested by Barr and the headline in the St. Louis Post-Dispatch. Not even close. 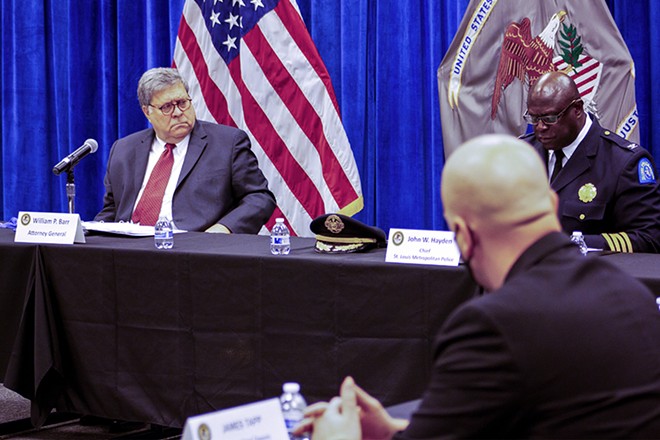 It's worth noting how uncommon it is to present a crime data comparison within the same year, as Barr's team did in order to get to that 49 percent figure. The St. Louis Metropolitan Police Department's monthly reports on crime and homicides are formatted for easy comparison over multiple years, and that's how meaningful trends are identified — such as how the monthly homicide count typically drops in the latter part of the summer, just as it did in 2020.

But 2020 is no typical year, and it's where Barr's team probably ran into trouble when they sat down to jostle some positive news out of their available data. Let's stay with the supposed 49 percent "cut" in homicides.

First off, it cannot be overstated how bloody the summer has been for St. Louis. Much of that blood was shed in June and July, which had a combined 85 homicides, roughly double the death toll recorded in even the most violent summers in St. Louis' recent past. In August, when Operation Legend deployed federal agents to the area, the month ended with 29 homicides. September added 22.

Simply put, 2020 is in a category of its own. Not only is the relative drop in homicides in the latter part of the summer consistent with trends in previous years, but the claim that 40 homicides over eight weeks is a success requires a suspension of memory (and information) of how uniquely bad things are.

“Attorney General Barr,” she tweeted after the press conference, “Let me clear my throat..! Did I hear you say since Project LeGend the #STL homicide rate is down by 49%? What data are you looking at? Bogus, short-term gerrymandered stats - insulting to the people of the City of St. Louis.”

Attorney General Barr @DOJPH - #FactCheck - Let me clear my throat..! Did I hear you say since Project LeGend the #STL homicide rate is down by 49%? What data are you looking at? Bogus, short-term gerrymandered stats - insulting to the people of the City of St. Louis.


Even when you have all the stats, the causes of homicide spikes resist easy explanation. In 2017, an uncommonly violent November pushed what was a more "normal" year of murders beyond the 200 mark; a search of the Post-Dispatch newspaper archives going back decades shows headlines touting homicide rates "on pace" for a new record, only for the killings to wane with a change in the season.

None of this mattered to Barr, who launched Operation Legend this summer at a time when federal agents were running wild in Portland, snatching protesters off the streets in unmarked vans and clobbering demonstrators under the guise of protecting federal property. President Donald Trump, who has insisted the “suburbs” are in danger from Antifa and Black Lives Matter, promised a surge of federal officers in Democratic-run cities to restore “law and order.” Operation Legend, named after a murdered four-year-old boy in Kansas City, launched shortly after.

The problem isn't that Operation Legend failed to conclusively reverse St. Louis' terrible homicide spike — that would be an unreasonable expectation that no one, not the police, prosecutors or politicians, would be able to meet. But this incoherency has followed Operation Legend since Barr announced its Missouri expansion in July, when he claimed that, in just two weeks, federal agents in Kansas City had made 200 arrests.

Only, that wasn’t true. At the time, Operation Legend had accounted for just a single arrest. Barr would later admit to House Judiciary Committee Chairman Jerry Nadler that he “misspoke” about the 200 arrests; he had actually been referencing arrests from a previous federal operation not connected to Operation Legend, one that had ended with the arrival of the pandemic.

During the judiciary hearing, Nadler told Barr that Operation Legend “appears to be little more than a repackaging of existing operations in these cities” and questioned the attorney general on his role: “Why join the president at the White House to announce a bold new operation that appears to be neither bold nor new?”

And yet, on August 18, barely one week after Operation Legend arrived in St. Louis, Barr and his federal prosecutors seemingly tried to spin the same claim. This time, though, they didn't spin an impressive arrest total, but a single high-profile case: The press release credited Operation Legend with the arrests of Sweetie Pie's Tim Norman and an exotic dancer in connection to a 2016 murder-for-hire plot that killed Norman’s nephew. The charges made national news.

The public showing made Operation Legend look good, but they didn’t exactly fit with the facts: The criminal complaint against the exotic dancer, Terica Ellis, had been filed under seal in July, more than a month before Operation Legend arrived in St. Louis; the St. Louis police had been investigating the killing since 2016.

Election years call for bold stances and new victories. On Thursday, Barr accomplished both for his boss with just a few minutes of platitudes and a minimum of scrutiny. Still, the optics were baffling: To Barr’s left sat St. Louis police Chief John Hayden. Across the room sat St. Louis County police Chief Mary Barton. The chairs around them were occupied by senior federal and state law enforcement officers, each with decades of knowledge and understanding about what fighting violent crime in St. Louis means, and what it doesn't.

Instead, the public got a canned speech from Barr praising a program with numbers that only look good if you don’t think about them very hard. The public was given a poster board of statistics, a silent witness standing in the corner of the room, unaddressed and unexplained before aides shuffled the reporters away. Meanwhile, the murders continue in St. Louis. The spike keeps spiking.

But at least Barr didn’t have to answer any questions. 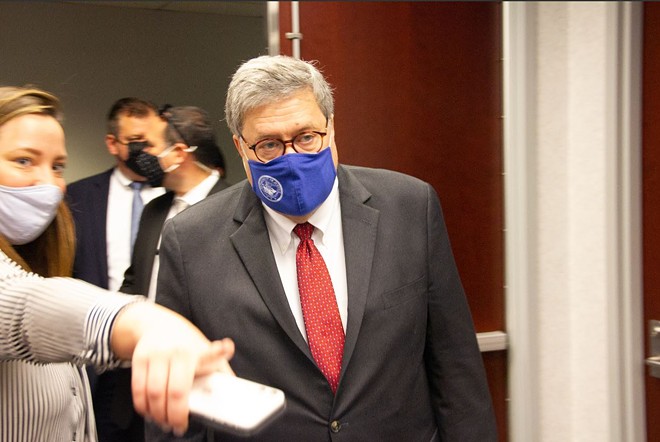