Punk Is Dad and This Photo Is Proof 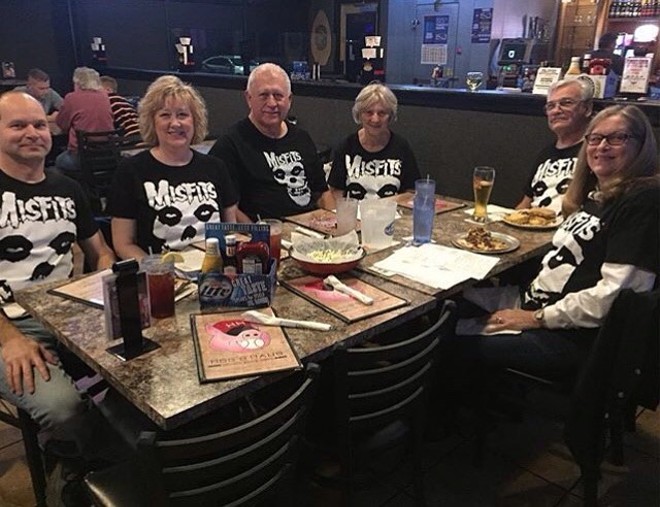 Photo by Paul Hyde
For decades now, music historians have been embroiled in a fierce and rolling debate about whether punk, that rebellious teenager of music that came of age in the late '70s, has yet met its demise. "Punk's Not Dead!" exclaim countless t-shirts, stickers and patches, often accompanied by an "A" anarchy symbol, which sometimes perplexingly has its own little copyright logo next to it.

We're not here to argue on that point — we'll leave that to the scholars and Hot Topic employees. One thing is inarguably true, though: Punk is Dad.

Consider the photo above. Taken early this week at Hog's Haus Bar in Weldon Spring, Missouri, it shows three lovely couples of plainly parental age seated around a pair of tables, each clad in a Misfits shirt.

The Misfits, for those of you who are not old enough to know about punk music, is a classic punk band that got its start by more or less marrying the sound of the Ramones with a year-round obsession with Halloween. Founded in 1977 and still limping along some 40 years and 20 band members later, the Misfits most recently made headlines when its classic lineup of singer Glenn Danzig, bassist Jerry Only and guitarist Doyle Wolfgang Von Frankenstein performed with drummer Dave Lombardo and guitarist Acey Slade in September at Denver's Riot Fest, a music festival/nursing home for aging punk bands and fans. It was the first time the group's three principals had performed together since 1983.

But the people in this photo likely don't know much about any of that. "The Misfits" is simply the name of their trivia team. (If anyone in this photo is truly a fan of the band, we're guessing it is the man seated third from the left. His shirt's design is far smaller than everyone else's, meaning he likely did not make his purchase with the rest of the group. We'd like to imagine that he is a diehard fan who pulled his old shirt out of the closet and showed up to the bar the first week wearing corpse paint.)

You see, the Misfits' "Crimson Ghost" skull logo, borrowed from the 1946 series of films of the same name, has become ubiquitous at this point. Shirts featuring the logo and band name can be purchased at Wal-Mart, which is also where your dad goes to shop for hammers and carpenter pants. Once a menacing, evil grin worn exclusively by outcasts and, er, misfits, it is now a suitable uniform for suburbanites engaged in a battle of wits at the local pub.

And that's just fine. Now in its forties, punk has reached that phase of its lifespan. Punk is Dad now, and he just wants to get together with a few friends at the bar and show off his encyclopedic knowledge of '80s movies. He recently bought a riding lawnmower, even though his yard is a little too small for one. He'd prefer if you would finally move out of his house and get a job already.

As if any further proof was necessary (it's not) consider this photo from 2010, where the once ultra-evil Glenn Danzig, now 61, can be seen walking out of a store, wearing his own band's shirt and carrying a recently purchased box of kitty litter. He probably got it at a Wal-Mart. He probably passed a rack of Misfits shirts on his way out, too.