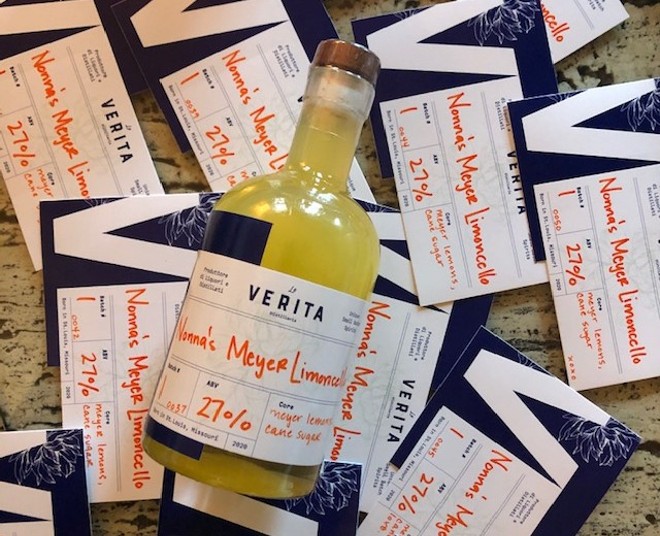 Gerard Craft has been busy during the pandemic.

In addition to advocating for the hospitality industry to state and federal officials, helping to spearhead a relief campaign for small businesses impacted by the pandemic, lending his hand at the North Sarah Food Hub and converting the former Sardella into Pastaria Deli & Wine (7734-2 Forsyth Boulevard, Clayton; 314-773-7755), he has one more accomplishment to add to the list: launching a new spirits brand.

The celebrated chef recently announced that his company, Niche Food Group, has launched a line of small-batch amari, liqueurs and non-alcoholic cordials called La Verita, which is available at Pastaria Deli & Wine. Craft tapped acclaimed bar professional Meredith Barry, who was bar manager at Taste before it temporarily closed due to the COVID-19 outbreak, to lead the project.

"Gerard came to me when Taste closed and said, 'I don't want to lose you. What do you think about going into research and development?'" Barry says. "He'd had this idea since Niche and had always wanted to do it, so we bounced a few ideas off each other, he sent me a few recipes and then handed me the reins."

Though Barry considers La Verita to be in the research and development stage, she's proud of what they are already able to offer. This includes a nocino, which is made from Missouri black walnuts, a Meyer limoncello, an arancello rosso and a fernet. Though the plan is for the brand to launch its own distillery, called Distilleria, for now Barry is sourcing base spirits and infusing them with ingredients to make the products.

The La Verita project is personal to both Barry and Craft. For the chef, the "Father's Fernet" is an ode to his dad, with whom he shares a love for the bitter spirit. For Barry, the limoncello and arancello are based on family recipes, and in talking through them, she got the chance to reconnect with her family history.

"I come from an Italian American background, and I called my grandmother, who has been making limoncello for a while," Barry says. "We got to talking about how my great-grandparents lived in this apartment building in Brooklyn that they got to live in because they cleaned it. It was the classic Italian immigrant story. My great-grandma would make limoncello every holiday season, and we talked all about it. It was wonderful to make that connection during this time."

Barry is taking her grandmother's advice — like using lemon zest rather than whole peels to make the limoncello — as well as her own research and Craft's input to do her own experimentation. In a setup she likens to a laboratory, she's thrilled with the results so far, even if the length of time it takes to know whether or not she has produced something successful can be a bit difficult to handle.

"You make it, put in the sugar and then let it rest for a few months," Barry explains. "It's not like when you make a drink and have that instant gratification that you made something good. This is a new territory for me, and I'm really happy to be in the testing stage and tasting things along the way."