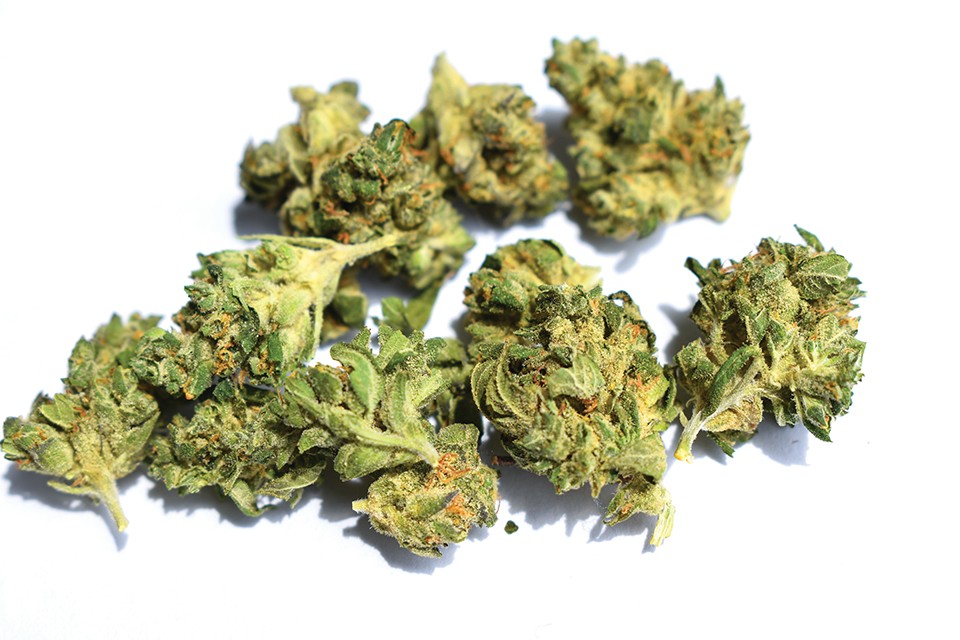 THOMAS CHIMCHARDS
At present, High Profile is carrying Glasshaus-branded flower, like this pile of Layer Cake, but they'll be stocking their own product by next year.

In the mid-1800s, some 400,000 Americans set out on a 2,170-mile trek from Missouri to Oregon in search of their fortunes, braving unforgiving terrain, brutal weather conditions and the threat of dysentery, which was artfully defined for me by my grade-school computer teacher as "when you poop yourself to death."

In those days, it was the prospect of gold in the west that led many to make that arduous journey. But now, with the so-called "Green Rush" sending investors and entrepreneurs all around the globe in search of their slice of the $48 billion-plus the cannabis industry is projected to be worth by 2027, some Oregonians are finding their way back to the Show Me State.

Enter High Profile (1416 Harvestowne Industrial Drive, St. Charles; 636-224-6033), the latest addition to St. Charles' medical marijuana landscape. Opened on May 5 off Route 94, the fresh new dispensary is one part of multi-state cannabis company C3 Industries' retail operation and one of seven dispensaries the brand currently has open across three states. C3, which is now based in Ann Arbor, Michigan, got its start in Portland in 2018 with the opening of a 36,000-square-foot indoor cultivation facility for its Cloud Cover Cannabis grow operation. The company has expanded rapidly in the years since, with a second production facility in Webberville, Michigan already in operation and a third in the works in Massachusetts.

With all of that travel across the country in pursuit of untold riches, I can only assume there must have been a lot of party members who pooped themselves to death along the way. And so, to honor their sacrifice, I figured the least I could do is point my own vehicle westward and go buy myself some weed in St. Chuck.

High Profile is housed in an industrial park in the home of a former bank. It's got teller lanes on the side of the building, which will eventually be used for a drive-through operation — something I'm a huge fan of, to be sure, but which is currently not in use. Upon walking in the doors you enter a waiting room with mid-century modern furnishings and a black and white motif, with accents provided by wallpaper decked out with the shop's "High" logo.

After handing my ID and medical card to a man waiting behind a desk, I walked with my budtender to the sales floor. Inside, the space is relatively spare, with glass counters on three sides of the room housing the shop's products, which include apparel and accessories in addition to cannabis. Since it only recently opened, High Profile currently has a somewhat limited selection, and it's currently stocking Glasshaus-branded flower and Clover-branded pre-rolls rather than its own Cloud Cover products. My budtender explained that C3 plans to build out its own grow operation in Missouri in the fall, with the first harvest coming sometime next year. On my visit they had Animal Mintz, Chem Scout, Layer Cake, Lemon Haze, Pink Citrus Farmer, Sundae Driver and Wedding Cake flower in stock.

I went with an eighth of the Layer Cake ($55) and a pre-roll of Gorilla Glue #4 ($15). High Profile offers a deal for first-time customers wherein you get one pre-roll for only a penny on your first visit, so I made it two Gorilla Glues, knowing well that this was definitely a strain I wanted to get my hands on. The dispensary also has a selection of edibles from Honeybee, Wana, Robhots and Keef, but what caught my eye was a small pill bottle full of "night capsules" labeled Vivid Dreams ($50). After taxes my total came out to $132.35.

I took a couple of the capsules almost immediately upon walking out of the store. The nature of the chronic pain that qualifies me for medical marijuana is as such that crappy weather makes it hurt more, and the day of my visit was a particularly rainy one, so I decided to get things started right away. These capsules come from an indica strain that clocked in at 24.66 percent THC, according to the packaging, and each capsule contains 14.5 milligrams of THC. Boy, did they work wonders. Within an hour of taking two of them my pain began to subside, eventually melting away about as much as it can, and I began to feel some pressure under my eyes and a relaxed, stony feeling in my brain that lasted a couple of hours. Contrary to my expectations based on the nighttime-referencing packaging, I wasn't laid flat by the stuff, and I actually continued to function nicely throughout the rest of the evening. My only complaint with these is that they kind of take the fun out of cannabis — my preferred method of ingestion is smoking, and if I'm going to take an edible I like when it at least tastes good, like Honeybee's offerings. Putting pot in pill form eliminates some of the mystique for this seasoned smoker, but I'd bet that there are plenty of people out there who would see the fact that you can just pop a pill and be on your way as a huge plus, especially since they're so effective with pain.