Reckoning With the Legacy of JJ's Clubhouse

On June 2, 2017, I shakily made my way over the rough rock driveway, up the cement stairs into JJ's Clubhouse (not without being rudely stopped by the doorman so he could search me while letting men pass by effortlessly). This was the first time I would try to go into the leather bar, as I'd heard so many horror stories from queer women about the place over the years. The bar famously refused to let women in the bar at all, even kicking out some men for looking too "feminine." When they eventually started letting women in, they had to be escorted in by a man and often patrons would block women from using bathrooms so they'd have to leave the bar completely.

On this particular night, I braved potential harassment and humiliation to see Justin Vivian Bond, Nathan Carrera, CHRISTEENE, Maxi Glamour, Cory Sever, and Joss Barton perform. A lineup of people who historically wouldn't have even been allowed in the bar, now headlining one of the queerest and most interesting shows St Louis had ever seen.

The few men I passed to get to the dance floor were visibly angry at my presence, and I trudged on nervously to the performance space. In one night, these trans people and drag queens made these leather men squirm with poetry, subversive drag, and covers of Nina Simone and Dolly Parton, and it was glorious. At one point, Bond loudly dragged the bar, saying queer spaces with such misogynistic histories should just shut down and make way for new more queer spaces, as we all cheered.

ERIN MCAFEE
Through its history, JJ's has not always been a welcoming space.

"It sucks to mourn a bar with so many problems, but what choice do I have? There is nowhere else to go," lamented Jared Rourke once the announcement of the bar's closure was posted on Facebook and the online tributes started to pour in. It's true, leather spaces are disappearing almost as fast as lesbian bars. Only 21 lesbian bars are left in the country, and it is unknown how many leather bars, as they often have to remain secretive for their survival.

Many bears, leather daddies and queer men who didn't (and didn't want to) fit the more widely accepted and palatable social norms of what it is to be "gay" found acceptance in the body- and sex-positive atmosphere that the only leather bar left in St Louis provided. For these folks, dancing around a St. Andrews cross half-naked or completely clad in leather was a much more enjoyable experience than standing around a bar, staring at TVs, being subjected to Cher's "Believe" for the millionth time while bachelorette parties filed in to gawk at them. 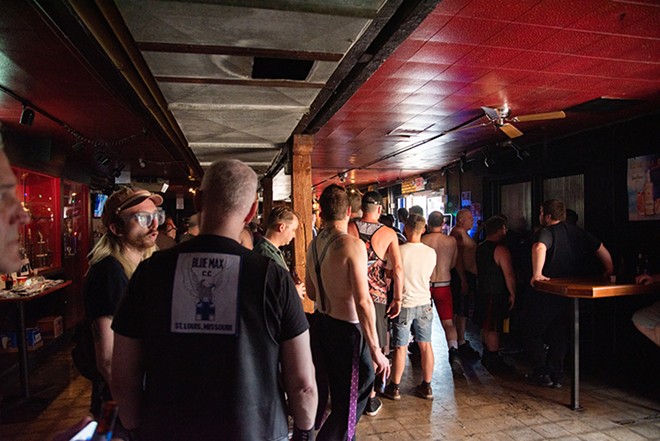 ERIN MCAFEE
For fans of JJ's, and there were many, it was a sad end.

JJ's was a haven for men seeking to be submerged in radical queer sexuality and community in the unwelcoming and often dangerous culture of the Bible Belt. It is, however, unfortunate that while unabashedly exploring their sexuality was a radical act, upholding white supremacy and misogyny in their space made them relics of our community as a whole. It was not shocking to many when it was announced a few years ago that the bar was up for sale.

On June 17, JJ's opened for the last time. For a while, it was a truly wholesome atmosphere. While sadness was present on many of the leather men's faces, happiness and love spilled from their hearts as they ran into old friends and surveyed the space one final time, trying to make the moment last as long as possible. People stood in line for up to an hour to get a drink and many gave up and smuggled in beers from the trunks of their cars. A small dance party erupted amongst the trucks parked under the overpass across the street. If this were San Francisco, that overpass would be painted rainbow and a plaque would be erected in honor of all the gay sex had under it during the past two decades.

ERIN MCAFEE
The sendoff was a festive affair.

A photographer who joined me for the night and I made a point to not center white cis-gender men in our photos documenting the evening, as they've centered themselves all these years. These photos are for all the leather women, trans folks and people of color who have found it so difficult to find space and community and are actively pushed out and erased by the white cis-men taking up all the space.

Every attempt was made to get consent from folks before these pictures were taken, as it is still legal to be fired for being LGBTQ+ or kinky in Missouri. It needs to be noted that 100 percent of the people who felt unsafe having their pictures taken were women/AFAB people, and stated they were afraid of losing their jobs.

As the evening came to an end and 10 p.m. rolled around, we were made to leave, while certain men lined up outside for a mens-only private party to close this chapter of St Louis queer history.

Elizabeth Van Winkle is a freelance writer in St. Louis.

ERIN MCAFEE
The closure of JJ's Clubhouse is the end of another queer space in St. Louis.
© 2022 Riverfront Times