can’t believe this week I’ll be competing in my second Olympic Trials. What a dream ✨ pic.twitter.com/mfuUbXZr52


By the end of this weekend, the roster of U.S. gymnasts heading to the Tokyo Olympics will be all set.

But first, they have to earn their way onto the team in St. Louis.

The city is hosting the Olympic gymnastics team trials through Sunday, drawing stars such as Simone Biles to town for an historic competition. The men's hopefuls began on Thursday, and the trials continue each day at the Dome at America's Center in downtown.


For fans, it's a rare opportunity to see the nation's top gymnasts in St. Louis, and it's more than just the trials. The dome is simultaneously hosting two other major gymnastics events: The USA Gymnastics Championships and the USA Gymnastics Congress & Trade Show.

Chris Roseman, vice president of the St. Louis Sports Commission, worked on the effort to attract all three events to St. Louis, a milestone in the city’s athletic life.

“It was probably twenty years in the making,” Roseman says in an interview. “This is the first time the Olympic trials in both men’s and women’s gymnastics have been held in the same city at the same time in the Midwest.”

At a press conference on Wednesday, Li Li Leung, the CEO of USA Gymnastics, said that the overlap in gymnastics events this weekend in St. Louis was unintentional, a result of COVID-19 rescheduling. However, the result offers the opportunity for gymnastics fanatics to submerge themselves completely in the sport.

“It gives us a whole week chockablock of gymnastics, which is really pretty amazing,” Leung says. “You're going to see every single competitive discipline at one place at one time here in St. Louis.” 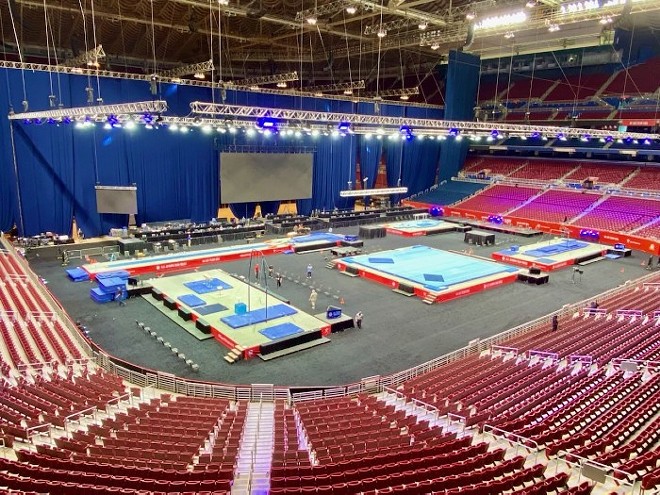 Coeli O'Connell
The floor of the Dome at America's Center is set up in the days leading up to the 2021 Olympic Team Trials.

The Olympic trials were originally scheduled to be hosted at the Enterprise Center, but after reassessing the facility's capacity, the St. Louis Sports Commission and USA Gymnastics relocated the event to the Dome at America’s Center. The dome will be divided in half with a curtain to separate the events of the Olympic trials and the events of the USA Gymnastics Competitions, which are rhythmic, acrobatic, trampoline and tumbling. In addition, each hall in the America’s Center will be filled with additional gymnastics competitions.

“It’s bedlam at the America Centers and at the Dome at America’s Center,” Rosewood says.

The athletes, including national sensation Biles, began arriving this past Sunday to practice before the competitions. Women will be competing in the trials on Friday and Sunday. The men began on Thursday and will finish on Saturday. Tickets are still available.

After it was decided to move to the dome, Rosewood says, 200-plus volunteers scrambled to make the transition possible. They accomplished what would usually take a year or longer in planning in just five weeks.

“It’s amazing the scope of what the volunteers have produced,” Rosewood says. “It does not happen without the volunteers. [They] installed or assembled all of the equipment for all the different disciplines ... they’ve in a sense put together five gyms on their own time.”

The volunteers primarily come from the local gymnastics community, specifically the fourteen clubs in the St. Louis area that worked with the sports commission in the weeks leading up to this weekend. Their ability to supplement the efforts of USA Gymnastics was, in part, another reason why St. Louis was considered such a desirable city to host these events.

Rosewood says that this weekend will be “a tremendous boon for St. Louis,” and points to historical figures of $28 million in cities who have previously hosted the trials.

“And that’s just the trials and Congress piece of it,” Rosewood says. “So that doesn’t include the USA Gymnastics Competition.”

After the pandemic delayed the 2020 Olympic Games for more than a year, athletes, coaches and everyone else involved are more than eager to get started.

“I have to say that I can not believe that we are finally here,” Leung says. “I hope that [the athletes] are really able to savor and enjoy this moment in time for them because this is something they’ve been training a lifetime for.”