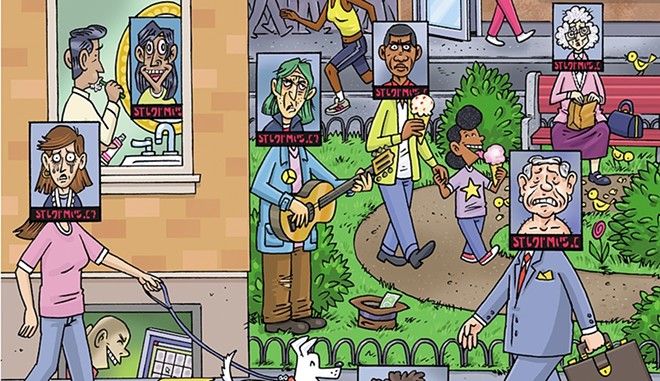 It's a continuation of a legal-but-exploitative business model that turns mug shot clicks into advertising revenue — and which for years relied on a unique arrangement with the little-known government agency responsible for storing the region's crime data.

As reported by the RFT in a July 7 cover story, that arrangement with the Regional Justice Information Service, or REJIS, involved accepting $150 weekly payments from the website's operator to offset "programming costs" for providing mug shots every day.

The ongoing relationship disturbed officials both in REJIS and the St. Louis County Police Department. Effective April 1, the department closed the REJIS-enabled data pipeline, thereby ending a system that had supplied the website and its owner, Edmund Tauk, with tens of thousands of mug shots since 2014.

In turn, April 1 became the day that STLMugshots stopped updating. But on July 12, the website added 34 mug shots, with more following roughly every day since. Fifteen mug shots have been added since Monday.

In an email Tuesday, St. Louis County police sergeant and spokesperson Tracy Panus confirmed that the county has indeed supplied arrest information to the website, but only piecemeal through separate requests made through the county's public records portal. That's a far cry from the system that once populated the website's pages by automatically uploading faces, names, dates and charges by the dozen.

Those aren't the only changes. The recent releases of St. Louis County arrest data to STL Mugshots no longer include ZIP codes — an omission that appears to have halted a popular feature in the websites' location-targeted newsletters.

While the pace of the mug shots may be slower, the impact remains devastating to those featured in its pages — people who often can't escape the digital record of an arrest featured on the website even after the underlying criminal charge was dropped or expunged.

But STL Mugshots is a business that's thrived for years, and it actively courts an audience who enjoys the spectacle of public shaming. On July 19, the Facebook page associated with the website posted a mug shot of a gaunt and pale woman who appeared unconscious and whose head was being visibly held in place for the photo by an officer standing behind her.